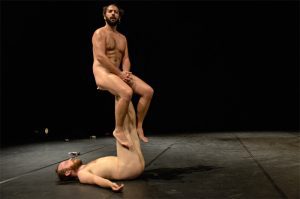 To say the least, dancer-choreographers Pieter Ampe and Guilherme Garrido are at ease with each others bodies in their dance called Still Standing You, a raucous dance duel about male bonding.

Ampe is a sturdy, atypically built dancer, a native of Ghent, Belguim and actually in the same corner, Garrido, from Portugal, is lithe and sinewy.   Their intensity dissolves into hilarity as they hurtle over cultural taboos of how men should ‘be’ around each other, lest they cede some aspect of their manhood.

As the audience filed in the Painted Bride Garrido is already chatting us up while perched on Ampe’s feet while he squirms flat on his back with his legs up in the air. “I looked like a Greek god when I arrived,” he jokes, but after trying all the cheesesteak palaces and he is in the shape he is now. The buff dancer need not worry, even when he’s not shy about letting his stomach muscles go slack for laughs.

He first talks about his experiences as a new father, touching on the wordless codes that develop between males that inform their whole lives. Eventually he acknowledges Ampe as his most trusted pal. “I’m sure you’ve read about what you are going to see us do and none of that is true,” Garrido continues “You came here to see contemporary dance and we’re going to deliver”

Ampe’s knees finally give way and he pitches his partner to the ground. The dancers fly into aggressive action scenes of physical one –up- man-ship, where they trade off dominance. The roughness seems dangerous for the dancers at points, but never without some signal from them that it is controlled fun. There might be a disco pose thrown in or a balletic leap, even if Ampe’s howls and growls are right out of WWW showmanship.

There is room for lots of cheap macho laughs and this audience was eating it up.

At one point, Garrido has Ampe pinned on the ground pulling his mountain man beard over his face and threatens to dribble spit on his forehead. Ampe gets him back when Garrido splayed using his ankles as stepping stones.   In a full lotus position Ampe stalks around the stage on locked knees, Garrido is in a contortion himself, trying to scurry away, but is overtaken and bopped around. Similar mise-en-scenes, like wrestling pins and games are played out.

Surprisingly, the choreography is so inventive that it doesn’t run out of steam over the 45 minute piece.   And it’s not all dance delinquency. Both dancers are skilled at yoga disciplines that they fuse into acrobatic strength moves at many points. Garrido is also a masterful dance mime with silky carriage and even down to elegant had dancing even when he zooms in to pick lint out of Ampe’s belly-button.

It seems gratuitous to say that the inevitable nudity was, in fact, not gratuitous, even with the guys giving the full Monty for much of the show.   Once they are liberated from any garment, they morph into strange, body twisted creatures. Garrido does a balletic dance of what look like a raptor then vaults into the air knocks Ampe down.

Eventually it comes down to the genital dance, as Ampe peals off his superman briefs and Garrido tosses off his grindr jock trunks, with liberating glee. The child-like antics of their bodies just toying around with each other outside of a sexual scenario is too goofy to seem prurient in any way. Why exclude any body part would seem coy. So when their penises become, non-sexually, part of the dance, it’s barely registers a jolt from the audience. Some of the positions get into unclothed look sexual, but their intimacy as partners was so passed that scenario by this point.

As they move to the concluding section their bodies are welded together in a flowing series of interlocked bodyscapes.   Ampe does the heaviest lifting in this sequence and is eventually collapsed in Garrido’s chest exhausted and vulnerable. This piece has been hugely successful on tour, but is so physically and probably mentally so challenging that the dancers can perform it only a few times a year. For all its whimsy, this is a dance duel that unlocks some of the mysteries of the ever dodgy male mystique.