Boxes of Secrets in Under Her Skin 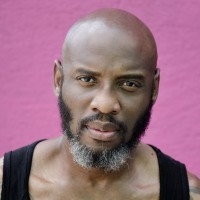 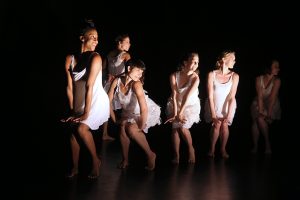 When I think of my own lineage, I am often left with holes in my story. I struggle to connect many dots, trying to find comfort in piecing together the puzzle of my ancestral legacy.

In an attempt to shed light on her own heritage, choreographer and director Jeanine McCain, left no stones unturned in Under Her Skin – a mélange of interactive installations that told the very personal story of her great grandmother who lived with a secret that she took to her grave.

Shown at the Performance Garage and as a part of the Philadelphia Fringe Festival, Under Her Skin asked the audience to board a train that would take them on a journey through mountains of memories and untold vintage stories. McCain intentionally transported the viewer with her clever undertaking of excavating her clan’s past in a six-part installation.

Although there were many stops along the tunnel of McCain’s past, stops two and three wrapped their arms around me and refused to let go. A woman in black sat on a stool and lightly played with a rosary. With boxes all around her, she maneuvered from one to the next performing the vulnerable task of revealing their contents. As I watched her interaction with each box, I was reminded of a jewelry box my mother housed atop her dresser with many unworn necklaces and bracelets nestled in its velvet shell, begging to belong to someone’s skin.

The station labeled “Laundry Line” had the faint smell of mothballs. Silky lace undergarments hung from lines as a parade of onlookers casually strolled through the dangling apparels. A birth certificate, a report card, a wedding announcement, an obituary, and a death certificate were also visible at this station. There, the echo of someone’s existence was either hung out to dry or left to wave in the wind.

After experiencing the installation titled “Portraits” on the final leg of the excursion, the audience was asked to sit and watch while six dancers in white undergarments became the backdrop to a black and white video projection. The stern gaze of the still dancers was reminiscent of a camera capturing a trice – an image that will live past its time and serve as proof that they were there. The visual of moving images running across the bodies of still performers created an eerie interconnection of the past and present living harmoniously in a frame.

The video ended and the dancers’ torso initiated movements, sharp gestures, and vocalization, shepherding the viewer along the pathway of hidden secrets, fond memories, and abbreviated stories.

The success of this piece was not in virtuosic dancing or high tech sets, but in the storytelling and the interactive installations. I was grateful to McCain for her generous offering as I left the theatre thinking about the contents of the box I would leave behind, and the story it would tell.

0 replies on “Boxes of Secrets in Under Her Skin”