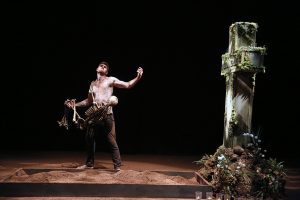 by Gregory King, Visiting Professor of Dance at Swarthmore College for The Dance Journal

The Philadelphia Fringe Festival opens on Thursday September 3rd and will celebrate the city’s artists alongside FringeArts Curated, national and international innovators in the performing arts. Scheduled to be a 16-day explosion of artistic expression, the Festival is home to contemporary performances that serve to push the boundaries of creative experimentation and the imaginative display of curious art-makers.

Leading up to the festival was a series of Scratch Night performances that were produced by the independent artists and promoted by FringeArts. On Monday August 24th, the final performances in the series took place at the headquarters of FringeArts. Ranging from aerial arts to barnyard hoedowns, these self-producing artists showed excerpts of their work that will be presented at the festival.

Scratch Night previews provided an opportunity for patrons to decide on which upcoming performances they wish to attend. From my experience, the problem I have with previews is that the spectators rarely get an accurate grasp of the full piece. I am usually bombarded with my own questions of how do I show the most compelling, interesting, and exciting part of my work and still keep the audience curious enough to come see the full piece. This was the challenge these directors and choreographers faced and they had ten minutes to win over the viewer.

Elaborately costumed in black lace, feather boas, corsets, and oversized headwear, the singing trio of REV Theatre Company delivered a cabaret style performance of They Only Come Out at Night: A Graveyard Cabaret, that was morbidly stoic yet comedic. These lost souls sang in dreary tones and I found myself picturing the troupe performing in the Laurel Hill Cemetery where the performance is scheduled to take place.

The Renegade Theatre Company previewed a carefully chosen excerpt from Damned Dirty Apes! – an expedition that took place in the FDR park ruled by laws of the jungle.

The aerial arts troupe of Tangle Movement Arts introduced The Girl’s Guide to Neighborly Conduct in which this all-female company demonstrated their stunning aerial display of strength, creativity and imagination. 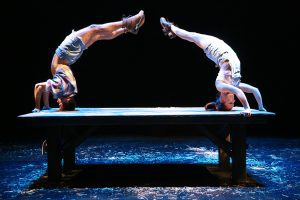 American Standard was a crowd-pleasing rendition of barnyard revelry. Performed by Brian Sander’s JUNK in which a super-sized table and stacks of hay served as scenery for this energetic display of backflips, handstands, front-tucks, and leaps. A group of stunningly polished dancers with visibly sculpted bodies were attired in denim and cowboy boots and executed their trademark rustic style that served as amuse bouche to their festival offering.

Hannah Van Sciver’s Fifty Days at lliam showcased excerpts from a bold new piece that will explored the Trojan War as told through the paintings of Cy Twombly.

The night ended with Gunnar Montana’s Purgatory, which revealed a visually stunning set of a massive, cross adorned with flowers and flocked with votive tea candles. A wooden box filled with dirt was later attached to the base of the cross and a lone male dancer entered the stage and stood in front of the soil filled box. A melancholy solo played out before the dancer dug through the sand-filled box to retrieve a skeleton and draped its dried bones around his body before lying in the makeshift coffin with the bony remains of his love.

Driven by FringeArts to support Philadelphia-based and emerging artists, ScratchNight was not just a night of previews but an introduction to the exciting line up the Fringe will offer.

From site-specific installations to interdisciplinary cross-pollination of technology, movement, music and visual art, the Philadelphia Fringe festival will become an incubator where art lovers will gather to see some of the world’s greatest artistic innovators in the culturally rich city of Philadelphia.