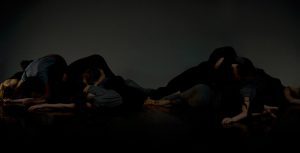 Like most performing arts supporters, I am used to walking into a theater knowing what to expect.  This is a story about a princess and a prince who falls in love with her, or This is about a little girl who falls down a rabbit hole, or even This is the choreographer’s opportunity to bask in the intoxicating warmth of the center stage spotlight.  I go into these situations not really having to do a lot of prior work.  I do not have to interpret anything because, either via program notes or context clues, the answers have been given to me.

Kim Brandt’s Silhouette was a enigma even before I walked into Philadelphia’s Crane Arts on Thursday night.  “Silhouette is a piece designed specifically for the 100-foot walls of the Icebox Project Space.”  That was it.  That was all she gave us.

“So, what’s this show about?”  a friend asked before the show.

“I honestly have no idea,” was all I could say.  The mystery was my own to solve.

Silhouette contains a cast of nine dancers   They began stacked on top of each other in the upstage right corner, as far from the entrance as possible. The Ice Box Project Space is a rather unconventional space for a dance performance because it is a blank slate of a room.  There is no curtain, no clear divide between performers and viewers, and simple, very minimalist lighting.  The only two benches along the downstage wall were quickly occupied.  The performance’s other attendees sat on the floor or leaned against the wall.

There is an anecdote in David Foster Wallace’s Infinite Jest,  in which one character, a filmmaker creates a film by equipping the movie theater with cameras.  What the audience sees when the film finally begins is a live feed of themselves watching themselves.  I wonder if this is the type of artistic situation I’ve signed up to witness tonight.  When the houselights dim, the dancers remained still, fixed in their pile of a position.  Eventually, they moved, but their movements were small and easily confused with flickers of the low light.  In the spirit of Butoh dance theatre, the pile melted into a puddle of individual dancers on the floor, with their heads facing different ways.  For the next two hours, the mass of dancer inched their way across the 100-foot space.  Their movements were always minute. Accompanied by the conversational rumble coming from another Crane Arts event and the thunderstorm that serendipitously bellowed outside, the dancers pushed and pulled each other forward, and occasionally backward.   Sometimes they froze into a multi-level shape, but their movement was limited to the horizontal, and it was not until reached the other side of the room that they rose higher than middle-space.  Overall, it was a production that required extreme patience, focus, and physical attention on the part of both the dancers and the audience.

But what was it about?  Even after seeing it, I am not certain that I know for sure.  The dancer stayed along the upstage wall, far away from the audience  We could only make out the outline of their shapes and slow trajectory from point a to point b.  They were silhouettes.  I am not, however, satisfied with that simplistic explanation.  There is something in me that wants this piece to be more than the embodiment of one word.  I want there to be a moral, a clear intention, a deeper meaning that I can wrap into a tidy package and tuck under my arm as I skip the moonlit path to my car.

As a choreographer,  I see the movement as an exploration of how to travel from one place to other without walking, an exercise in Bartenieff style locomotion.   The ISTJ on the Meyers-Brigg scale in me wants to know which dancer or direction was initiating the movement.   Was there a  cue?  At one point, I suspected that the group’s movement was a reaction to the quiet shuffling of the audience so during a moment of stillness I made some noise to see what would happen.  The dancers were unbothered by my experiment.   As a dancer, I wonder about the rehearsal process.  What kinds of cues and direction were given.  As a creative dance teacher, I imagine the Freeze Dance directive “Dance like you’re moving through ice cream!”  The activist wonders if this piece is a metaphor for the arduously slow progress of social change.  “I know you are asking today, ‘How long will it take?’ Somebody’s asking, ‘How long will prejudice blind the visions of men, darken their understanding, and drive bright-eyed wisdom from her sacred throne…How long? Not long?”    In light of America’s current sociopolitical climate, a dance based on this speech from Dr. King would be apropos.

By the end of the two-hour journey from right to left, I’ve come up with a conclusion based on practically every interest I have.  I can support them all, but am I right?  Like a silhouette, the piece’s explanation is as obscured by darkness as the details of the dancer.  I could only watch, guess, rethink, and repeat.  I would continue to do so long after the performance was over.  When the dancers melted into their final posing,  I, having shifted my own position from sitting, to crouching, to standing, to leaning, was left knowing everything and somehow, nothing at all.