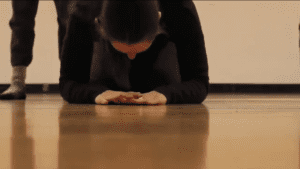 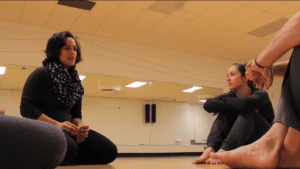 A dark night of the soul is a term used to describe a spiritual crisis or a period of intense doubt and uncertainty.    The feeling is certainly older, but the phrase itself is attributed to a poem written by St. John.  Mother Theresa is said to have had a dark night that lasted from 1948 until her death in 1997.   These crises for faith are not, however, reserved for spiritual giants.  They can plague everyone, from the greatest to the least of these, and everyone in between.

Belle Alvarez is currently sitting on the floor of a dance studio in front of a group of dancers who are counting an inaudible song with their breath, leaning as they curve their arms outward and then serpentining their spines upright.  With Belle sitting at the helm, and the dancers sitting in a tense silence, they remind me of a boat pushing and pulling against the waves of a black sea.   “Let’s stop there for now,” Belle directs. The dancers sigh out of their poses.  This is not a crisis of faith; it is a dance rehearsal.  It is a Monday night in North Philly and not a dark night in the wilderness.  At least not exactly.

Alvarez is a graduate of the Temple University dance program, and she is working as a local dance educator and dance artist.  She is currently leading five dancers on an artistic exploration of faith and religion called faith shift.   “faith shift is a work in progress triggered by doubt and an estranged relationship with faith,” Alvarez explains in a definition that describes both the production and her religious position at the start of the process.

Alvarez explained that faith shift began as a way for her to confront and explore her own doubts and beliefs.   While Alvarez is both the choreographer and director, faith shift is a story that belongs to her and her collaborators, Antonia Z Brown, Evan Hoffman, Jay Oatis, Kailey McCrudden, and Molly Woytowicz.  Her creative process heavily relied on conversations with her dancers.   These questions were open  some of them as simplistic as “What do you believe?”  or “How do you feel about Pope Francis coming to Philadelphia?”  Some were a bit heavier like “What is one thing you would say to a hypocritical person?” or  “Does organized religion have any relevance outside of it being an aspect of your upbringing?”   The discussions and answers fueled movement creation and appears as the text and music the dancers that accompanies the choreography.

Listening to the dancers talk about the process of discussing and confront their feelings about religion that this was more than a typical rehearsal experience. “Religious discussion can sometimes lead to dissonance,” Alvarez explains. While audiences will certainly see the dissonant moments represented, they will also witness very interdependent partnering and interaction that allude to togetherness.  These moments acknowledge that while religion and religious differences, the very things that can segregate a community, can be the thing that brings it together.

Everyone knows the warning that religion is one of the things cannot be discussed at the dinner table.  Even within homogenous religious communities certain things are beyond discussion.   With faith shift, Alvarez frees the table from the chains of censorship.   She brings it to her dancers and her audiences and says, “Let’s talk about it.”

“It has certainly helped,” Alvarez says to me as the dancers file out.  I’ve asked her if her if her faith has shifted from the beginning of the process to the dress rehearsal.  “I think doubt can be healthy,” she says.  Contrary to the popular practice that condemns curiosity when it comes to matters of faith, the exploration and conversations can be the hint of light that leads lost ships safely to the shore.  “I think that doubting can,” Alvarez pauses and exhales, “doubting can lead to something more.”

faith shift  premieres on July 10, 2015, at the Mascher Space, 155 Cecil B Moore Ave, Philadelphia.  Performances occur at 7:00 and 8:30.  Tickets are $12 for general admission and $10 for artists, students, and seniors.  They can be purchased at http://faithshift.brownpapertickets.com.   Visit http://www.bellealvarez.com for more information about faith shift and Belle Alvarez.