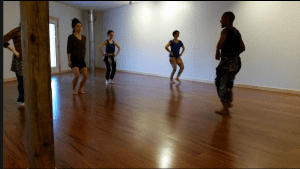 I suppose I could call Philadelphia’s newest art space a dance studio. The floors are beautiful, wooden, sprung, and rumored to be heated.  Plus, there are dancers and dance classes, and these are all things a dance studio needs. However, limiting The Whole Shebang to this classification feels a bit like calling Starbucks a cafeteria simply because I can eat there.  There is more to the space than that label allows.

Before going to the new South Philadelphia studio, I went online to check out the class schedule.  I expected to find the usual class offerings: ballet, modern, jazz, contemporary, etc. What I saw were class titles like The Diasporic Movement Practice Series, taught by Lela Aisha Jones, and Anti-Absolutionist Yoga, led by Christina Gesualdi.  I was not quite sure what to expect from such classes.  “What does one wear in an anti-absolutionist setting?” I wondered and began a series of questions that ended with “Is there required reading?”    These course titles transcend the  familiar studio setting and took me back to days at my liberal arts university.  It was in a liberal arts setting that I discovered the art of collaboration, not only between people, but also subjects.  This type of collaborative education encourages one to take two seemingly mutually exclusive things examine a relationship.  The Whole Shebang is somewhat of a liberal arts mecca  because practically every element of the studio, from the founders to the operation, incorporates some type of collaboration.

The Whole Shebang opened it’s doors in the spring of this 2015.  It was founded by performer, dancer, choreographer, and moving parts project director, Meg Foley, and Carmichael Jones, a local glass and sculpture artist.  “As collaborators and partners,” they wrote that their intention is for the Whole Shebang to be “a hub for the creative and experimental.”  In the  spirit of the class offerings, or perhaps as a guide for them, Foley and Jones crafted a mission statement that relies on words and principles like “experimentation,” “energy collision,” and “trying-out-of-things.”

In addition to regular classes, The Whole Shebang hosts workshops that are often advertised as being open to all artists of all genres.  These workshops cover a wide range of topics such as improvisation and art-making and the relationship between art and clairsentience.  They hope to conduct a small arts marketing workshop soon.

Not only does the studio aim for partnership between artists and other artists as well as artists and their various communities, but by allowing working artists to both teach and create The Whole Shebang emphasizes a blending of the different aspects of the individual artist.    It seems like many studios in Philadelphia focus their attention towards dancers of all skill and interest levels.  There is a need for that if dance is to be accessible.  However, although The Whole Shebang does have a very welcoming environment, it feels like a studio for the working artist.  According to their website, the space strives to be “home for the practices of working artists and teachers while also supporting their own careers as working artists.”  When I look at the Whole Shebang, I see an establishment that was created with the professional artist in mind.  It is as if Jones and Foley looked at their careers and asked themselves, “What would I like?” or “What do I need?”  They then set about to create a space that can boast of private dance and art studios, a diverse series of art and business workshops, and a roster of integrative classes with prices ranging from $1-$10.

When I first heard of The Whole Shebang, I wondered about the name.  Now, after a visit to the community, my questions have been answered.  The space offers, is, and promises exactly that.  The arts can be an industry of battles.  An artist’s instructor, student, and creative mindsets can be a constant fight for the limelight.  We see this same struggle between between concert and commercial dancers or performing and fine artists.   The Whole Shebang is a step in the direction of artistic unity, a step that I believe can benefit not only individual artists and art-makers, but the Philadelphia arts community as a whole.

The Whole Shebang is located in South Philadelphia at: 1813 South 11th Street, Philadelphia, PA 19148.  The entrance is in the rear of the building which is accessed through the SS. Neumann & Goretti High School parking lot on Moore Street, between 10th and 11th.   For more information visit: www.thewholeshebangphilly.com.