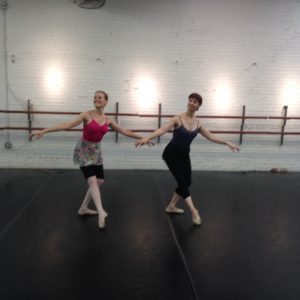 The first classical variation I remember learning was the “Bluebird” solo from  Sleeping Beauty.  I was a thirteen-year-old student attending a summer intensive.  I was wearing a black camisole leotard, pink tights, and pointe shoes, with my hair shellacked into a ballet bun on the top of my head.   At that age, we had the idea that  one day we would perform these same solos onstage as a part of a full-length and well-attended production.  There was, and I imagine still is, an unspoken piece of advice for young dancers that  went, “Learn this variation now so that you can perform it later.”

The instructor had a habit of introducing combinations by saying, “C’est la même chose.” It is a shortened version of an idiom that translates to “The more things change, the more they stay the same.”  In the context of our ballet class, the phrase noted that the combination we were about to do bore physical and technical similarities to the work we had just done, and that what we were about to do should feel familiar even though it was different.  During the afternoon variation class, this same instructor would split us up into groups,  and look back at us from his spot near the stereo.   “Bon chance,” he would say with an unworried French accent.  He would nod. The music would start.

At 27, I’ve let go of the dream that I would get a frantic call that would tell me that the soloists, understudies, and all other capable and working ballerinas were injured and that I was needed to perform the “Bluebird,” “Aurora,” “Black Swan,” or “Giselle,” variations.  I’m okay with that.  A career on pointe is not a dream deferred for me, and most of the time I don’t wonder what would have happened if I’d made a series of different choices.  Still though,  I like ballet, and one of the lesson I will keep learning is that I am allowed to like and learn ballet and ballet variations even though I do not want to and probably will never be a ballet dancer.

At Alexei Borovik’s Wednesday evening Variations class, a diverse group of dancers stretch quietly in the middle of the studio floor.  We are not pre-teen dancers, but we approach the space that way. We are dressed combinations of leotards, tights, t-shirts, tank tops, and jazz pants.  Some wear pointe shoes, some wear flat shoes.  I opt for a leotard, black tights, and ballet shoes all safely hidden beneath sweatpants, a long-sleeved t-shirt, and black socks, which feels like the dance equivalent of hiding my ballet light under the proverbial bushel. We approach stake out space at the barre with a recognizable reverence.

Borovik is an award-winning dancer in the United States and Russia.  His performance credits include title roles in major productions with Russia’s Perm Ballet, The Stars of American Ballet, Pennsylvania Ballet, and Jeanne Ruddy Dance.  He eases the studio’s tension with his relaxed demeanor and an easy smile.  He jokes with regular students and introduces new students to those of us that he knows.  Before we start, he explain’s the class format, which is a brisk warm up at the barre and then onto this week’s variation.

This week we are learning “Satanella.” a variation choreographed in 1859 by Petitpa.  Borovik approaches it much like an artist approaches a canvas.  He sets the framework and then shades  and colors it in with technical specifications and artistic details, often mentioning similarities between the movements we are now doing to exercises we’ve done moments earlier at the barre.   He tailors the choreography for the level of the class.  Offering different steps for beginner or more advanced dancers.  “Here is what you can do,” he once told a student who asked if the class would be too difficult for her.  “You can try it as it is, or you can make modifications.”  He enthusiastically accepts  both choices, and finds a way to make each option look classically lovely.

When you are young, the reason to learn variations is to prepare you for performances.  To see the steps you do at the barre movements that strengthen, morph into movements that narrate.    As an adult, I learn variations because I want to.  I make this choice without any concern for the doors this knowledge may or may not open, and I am starting to think that learning variations without the pressure of an impending performance is more fun. Borovik’s class is a safe space to learn, to try, to dance, to do all three.

When we are ready for a run of what we’ve just learned Borovik walks over to the stereo, pauses, and looks back at us.  “Just do your best,” he says with an unworried tone before he pushes play.  It feels like a familiar way of saying “good luck,” just before the music starts.  Plus ça change, plus c’est la même chose.