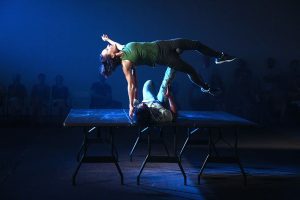 On concrete walls hung pictures from an exhibition titled “Portraits of People on the Move”. Who were these people? What were their stories? The patrons who gathered to see Silvana Cardell’s latest work, Supper, People on the Move, mulled around the lobby, which felt more like a holding cell, rather than the entrance to a performance space. Below each portrait was the biography of these Philadelphia area immigrants who chose to be a part of an oral history project curated by painter and sculptor, Jennifer Baker.

Before we were allowed in, we were told by a very assertive usher (who I later found out was a cast member – Maria Urrutia), to form one line and present a photo identification with our tickets (bummer, the one day I left home without my wallet). We were ushered in seven at a time and we each had to stop by a table upon entrance. We gave our names, showed our I.D.s, and were told on which side of the stage we were to sit. Because I didn’t have my I.D., the gentleman at the table scribbled my name on a piece of paper, handed it to me and said, “to the right please.”

Directed and choreographed by Silvana Cardell, Supper, featured guest artist Merián Soto and a group of six agile dancers who told the stories of locals, refugees, immigrants, and people on the move. These stories were told using simple props in a wide – open space. Cardell used folding tables, stools, fruits and papers copied to resemble America Visa forms; all symbolic – all referential. (The papers used were the actual forms Cardell and her family used in their process toward U.S. citizenship).

I immediately noticed the moving cameras that were set up in the space (they were filming the show which was to be shown on a jumbotron on June 26 at Independence Mall park) as I sat in one of the chairs that lined the performance space, facing the audience on the opposite side, who sat facing me.

Performer William Robinson had a soccer ball and was consumed with keeping the ball moving. He dribbled, tossed, kicked, held and ran with the ball while a lone rectangular table clung to center stage. On it was a loaf of bread, some fruit and glasses. Like David Beckham, Robinson handled the ball like an expert and was in complete control. He planted his feet firmly on the ground without locking his knees. He dragged the balled back with his dominant foot and quickly inserted the same foot under the ball. Hoisting his foot to the roof, he popped the ball into the air. With each bounce of the ball he controlled its landing on the inside of his foot. This pre-show display was similar to what I witnessed growing up in Jamaica where children played soccer in the empty lot next to where I went to school. (Cardell told me in our post performance “supper”, that the stories of children playing soccer, frequently surfaced in her research of refugee camps).

With funding from The Pew Center for Arts and Heritage and additional support from Swarthmore Project for Dance grant, Georgian Court University and the Mural Arts Program of Philadelphia, Cardell archived stories of many immigrant experiences. Stories from Cuba, Ecuador, Mexico, Columbia, Jamaica, Honduras and Argentina among others, made their way into the amalgamation of Supper’s movement indulgence. Cardell created a delicately fabricated network through which we all saw ourselves. These stories, painted the landscape from what was once home to the place they now call home. Stories of crossing borders, hard goodbyes, visa interviews, and for some, constantly navigating a world where their existence is still undocumented.

Bethany Formica and William Robinson performed several impressive duets throughout the piece, but one stood out among them. Formica’s sturdy body provided the strength to hoist herself atop a table from one leg. While standing with one leg on the table and the other on the floor, she slowly pressed into the table and lifted the dangling leg. She pulled the leg up and allowed it to rotate to her left side before placing it on the table in a crouching position. Robinson somersaulted onto the table, landing within close proximity of Formica. They carefully engaged in a tactile game of restrain and release. They were both loyal – they were both trusting.

Supper, People on the Move was a well thought out and efficaciously executed choreographic project. Cardell offered an authentic gift that was both intense and honest. She delivered a splendid work that called for us to carefully examine the paths people take to conquer new horizons. A true masterpiece, Supper was spearheaded by a bold choreographer. Leanne Grieger, Ann-Marie Gover, Adrian Plascencia, and Maria Urrutia were fiercely committed dancers, who were physically poetic as they stayed true to Cardell’s choreographic intent.

Supper kept the audience engaged, even as we were called at the conclusion of the performance to break bread with perfect strangers.