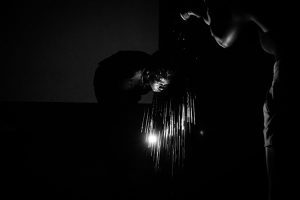 Defined by the Webster’s dictionary as “an outer part or edge,” the word border suggests restriction, restraint, limitation, and boundary.

On Sunday June 7th, performing artists Esther Baker-Tarpaga and Heidi Wiren Bartlett brought together a group of diverse performers whose works were charged politically and who crossed numerous borders. Baker-Tarpaga and Bartlett wanted the overarching theme of the evening to speak to the climate of the times, so an intimate gathering of art lovers and art makers seemed appropriate. Full disclosure, I performed on the program but I was also interested in how the other artists allowed their craft to intersect at the cross roads of social change and audience engagement.

I was excited by the diversity of race, gender, political issues and artistic medium present. From dancers to sculptors, spoken words artists to visual artists, we were all gathered in the name of art, hoping our expression would effect change.

Baltimore artists Ada Pinkston and Marcelline Mandeng performed multidimensional works that included dance, text and a strong desire to engage audiences. Pinkston’s Nation State Domination explored the many layers of identity, through commentary on gender, race and sexuality, while Mandeng’s Introduction to Philadelphia, was a ten-minute performance art piece that he considers to be in a constant state of evolution. Pinkston, co-founder of a performance art lab appropriately called “Lab Bodies” will be curating Border, Boundaries and Barricade – a two week long performance arts festival in Baltimore from June 22nd – July 4th.

She had billed Mandeng who is a graduate of Maryland Institute College of Arts and proclaims to be a sculptor whose work is predominantly based in performance. While both performances were based in mixed media, their personal voices were both strong and clear.

With the trifecta of Amanda Edwards, Emma Whitethunder, and Austin So Serious, I started thinking that The University of the Arts sent their own delegation to participate in the conversations around arts and social justice.

Dancer turned poet – who still dances, Amanda Edwards is a recent graduate of University of the Arts. Although she classifies herself as a dancer, she is starting to engage audiences through spoken word. Her works Light and Thank You, were inspired by African American history and systematic oppression. Edwards, a very passionate performer, is deeply concerned about the state of black lives in America and believes that education through the arts is essential. Also a spoken word artist, rising junior Emma Whitethunder performed a work titled Washington Redskins. Engaging and provocative, Whitethunder’s piece examined the term “redskin” in relation to its context when addressing the injustices of Native Americans in the United States – a narrative so seldom shared. Rounding out the UArts contingency was music producer and audio-visual specialist Austin So Serious. Using his platform to give a voice to the contradictions of religion, the struggles of war, and the injustices of poverty, So Serious premiered his work “Piece”, a visual kaleidoscope that forced the viewers to question their understanding of truth and perception. To harvest material for this piece, no pun intended, So Serious took samples of works from you tube and PBS shows that dealt with political issues, then added the music to create a macramé of stimulating images and sounds.

Philly based dance improviser Asimina Chremos, presented a work in progress. Delicately blending movement and shadow theatre, Chremos challenged the audience to question their ideas of perfection. Also known for her crotchet work, which was also included in the performance, Chremos’ method of discovery was approached step-by-step, move-by-move, and stitch-by-stitch. 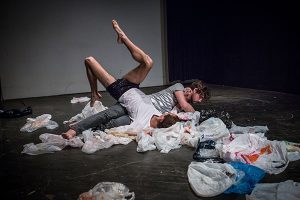 What do you get when you put together a stage filled with plastic bags, a dancer and musician? Plastique Romantique. Wittily called “dance perc,” Romantique was a duo performed by dancer Sean Thomas and percussionist Andy Theirauf. (The term “dance perc’ resulted from the combination of the words dance and percussion which is the art mediums of Boyt and Theirauf respectively.) An excerpt of a larger work, Plastique Romantique investigate the values people place on plastic and their attachment to its everyday use.

Choreographer Esther Baker-Tarpaga, interdisciplinary artist Heidi Wiren Bartlett, collaborated on a presentation that used a water cooler, beers, candles, ice, dirt, an apple, paint, a sheet, a Victorian wig, and tape. All these props helped to create the environment where they would metaphorically and abstractly decenter whiteness. With their bodies as the point of emphasis, the duo created works separately but came together in the name of experimentation. Both artists are white women who believe strongly in bringing awareness to white privilege and all that its obese hands hold.

Events that promote artists coming together to address current social issues couldn’t be more urgent. From Ferguson to Charleston, racial tension in America has made it necessary to consider our position on institutionalized oppression. Art doesn’t necessarily eradicate the problems but it surely acts as a catalyst for pressing conversations and much needed dialogue.

Imagine what could happen if we start having these conversations in our respective communities – maybe it’s wishful thinking but with sufficient discussion and exchange, perhaps we could one day exist without “borders”.