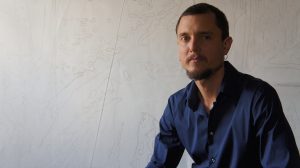 Philly – based Cuban composer Francois Zayas is premiering his yet to be titled ‘musical journey’ for 12- piece orchestra, dancers and vocalists at the Kimmel Center. The performance caps off the venue’s season long jazz residency series in the SEI Innovation Studio. At a 55-minute free preview of the work last month, many in audience stayed for a Q&A with Zayas and were particularly interested in the dance segments.

Jessica Daley, longtime Koresh dancer and Vince Johnson, hip-hop/martial arts soloist are also performing throughout the piece. The piece is a musical journey of musical cross-streams that blend jazz big-band jazz with a mosaic of sounds from Cuban rumba to Bulgarian gypsy music, just to name a few, and at one point vocalist Chrissie Loftus sings a breezy ballade as the dancer tell the story on the dance floor.

Between rehearsals earlier this week, Zayas and Johnson filled in details about the dance elements.   Johnson explained that he and Daley developed much of the choreography themselves, but Zayas also working with them on dance concepts of the piece. The dancers are able to tap into their daring athleticism in their solo sections and in the central duet their different styles ignites new choreographic territory.

Johnson said he started in martial arts when he was five is trained in tae kwan do, capoeira and other disciplines. He has a black-belt in kempo karate and has competed on the international circuit. Johnson has danced in Ron Wood’s Zen One Dance Collective and with Rennie Harris Puremovement, among other area troupes.

“Jessica and I come from two different dance worlds. She’s highly trained in classical, modern and jazz. She was a huge driving component for me. And Jess is extremely athletic and daring . I’m used to moving with another body in martial arts, but I haven’t had the opportunity to do this level of partnering, “ Johnson said.

“We worked very naturally together, we would try things, deconstruct them, or chuck them out and move on.” Johnson was used to these methods in martial arts training and Daley also was accustomed to that choreographic push – pull, working with Roni Koresh.

“Francois wants this to be a bigger piece choreographically. He knows a lot of the aesthetics of dance. He has so much previous experience with Cuban dancers,” he noted.   Zayas not only taught Johnson to rumba for the piece, but how to play the conga so he can be one of the drummers before he vaults into an explosive dance aerial that corkscrews his body horizontally.   Johnson added that it is a great opportunity to dance so close to an orchestra is “it’s intimate and I’ve learned so much feeling the connection between the steps and the full sound of the instruments…is groovy.”

After Zayas finished checking a few technical issues with band members, he was able to take five to talk about the dancers and his evolving dance-musical orchestral.

“I wanted to have a piece of music that is moving around from one place to another. Everybody taps into the history of their instruments, harmonies, scales, those things go from one place to another. It wasn’t hard because I wanted to compose something related to Balkan brass music, and Eastern European music with gypsy roots that have influenced so much internationally. Cuban and big band jazz, even symphony orchestra…are all part of this piece,” he explained.

Zayas started working on this piece late last year and he had everything orchestrated in March. Since the performance last month, there have been a few adjustments to the score as he and dancers refined the choreography.

“I compose all the time. But I write more when I have a deadline. It always gives me the motivation to keep composing,” Zayas said. He noted that working with Daley and Johnson has been “so great for developing this piece.“ Aside from deciding on a title for this large work, the composer plans to add 30 more minutes eventually and to incorporate more dancers from different idioms. He envisions hip-hop duets with a ballerina on pointe to characterize what he is doing musically .

Zayas has been in Philadelphia for nine years and in addition to being a prolific composer he leads a jazz quintet that plays regularly in the region. He is part of the new generation of jazz musicians revitalizing of the jazz scene here, which is on a definitely upswing, after many years of decline. Zayas said the jazz residency program reflects Philly’s vibrant jazz community “To bring jazz to new and bigger audiences and it’s so inspiring to work with musicians, singers and dancers from different artistic traditions.”