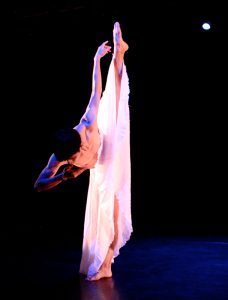 by Gregory King, Visiting Professor of Dance, Swarthmore College for the Dance Journal

Building HOME could have been just another choreographer’s showcase turned out to be a supporting laboratory where Kun-Yang Lin encouraged the dancers of his company to display another side of their artistry. With six pieces by company members and two pieces by Lin, the evening felt like a celebration of togetherness where dancers choreographed and choreographers danced.

(Two) Sanity Ceremonies opened the show with choreography by Helen Hale. A performance art piece that highlighted Hale as a solo performer, Sanity Ceremonies had props, video, and a set. Hale slowly walked downstage to the soundscape of Eleftheria Arvanitaki and Lord Huron. She wore her props – a teapot…or was it a coffee pot? She pantomimed animated gestures that presented themselves in physical face twitching and hand trembling. Her body was the magnet for the kitchen tools she carried: the metal cups hanged around her neck, spoons dangled from her arm and she pulled a flask from beneath the tights covering her thighs. Hale’s performance was laced with comedy and her physicality was evident as she embodied an Olympian in the second section of this work.

Rachael Hart and Mo Liu dazzled in a duet titled Discourse. Choreographed by Lin, Discourse offered accented gestures and quick agitated movements. Amidst these instances of intense wildness, there were moments of stillness. When they paused, I told myself they were taking the time to familiarize themselves with each other: carefully, quietly. They moved with urgency, completely in control.

Excerpts from Choreographer Jessica C. Warchal-King’s evening length piece (in)visible veins allowed dancers Belle Alvarez, KC Chun-Manning, Katherine Keifer Stark, and Marcie Mamura to brighten the space while donned in white. With body isolations, flexed feet, rotating wrists, fingers moving in succession, crawling, sliding, and legs slicing through the air in reverse rond de jambs, King’s vocabulary was profoundly simple yet crafted with an intelligent use of space. I have never been a fan of excerpts because they sometimes leave me disengaged and King’s (in)visible veins left me struggling to understand the dancers’ relationships to each other.

What do you get when you combine Awassa Astrige “Ostrich” and Jessica Lang’s “The Calling”? Kun-Yang Lin’s Moon.

A topless Mo Liu stood onstage wearing a long white skirt. Slowly rotating, he stomped, and stomped, and stomped. His arms carved through space, giving life to his back. This arm back combination was birdlike and when he jumped, the bird came to life. Fluid in his approach to the choreography, Liu captured the audience with his supple spine, his expressive arms, and his secure yet vulnerable presence. His fingers clapped, his arms rippled, and his body responded.

He played with the space as if it was a familiar friend.

He was intentional and sure.

He was shy yet savage.

Liu brought Lin’s choreography to life and reminded us why Lin deserves a spot on the roster of choreographers who make a difference by creating an impact.

Of what becomes also featured Liu in a duet with Rachael Hart. Choreographed by Hart, this duet was provocatively sensitive when they touched. They complimented each other with technical nuances that made their togetherness perfect. 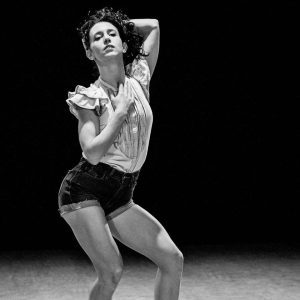 The Ripening Suite by Evalina “Wally” Carbonell was a piece I had seen previously, although it was in another iteration. Choreographer Carbonell also danced in the piece and her dancing continues to be a welcoming delight in clarity, quality, and stage presence.

Mention must be made of Grace Stern who delivered a virtuosic thrill at its calmest. She allowed the space to claim her before she accepted its comradery. Stern changed levels and direction with a peculiar specificity that confirmed the fact that she knew how to activate her pelvis. She used it to generate her mobility while remaining stable.

While I wrestled to understand Jessica C. Warchal-King’s (in)visible veins, her solo performance in The Protected was gripping. Athletic and nuanced in its presentation, The Protected revealed King in positions of defiance and strength when she stood in an open stance with her chest lifted and arms raised above her head and bent at the elbows. She was unapologetic in her demeanor as she overpowered the space with her deliberate musculature. King danced fearlessly – she was home.

The night ended with Wei Wei Ma’s Untitled, which left me wanting more. I tussled with my thoughts of the piece, only to walk away fixated on the costume. Ma wore a backless red dress that served as weapon and shield.

She wrapped herself in it.

She splayed the train, almost peacock-like, beckoning her mate.

She used the train to win him then pushed him away.

She shielded him, she dismissed him.

The red train was both calming and violent.

Building HOME was not another showcase but a peek into the creative processes of artists who continue to create a safe place they can call…you guessed it!