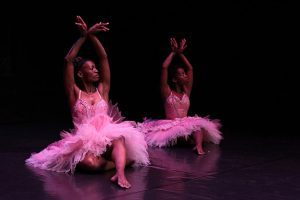 I have wrestled with whether to publish this review as it does not directly relate to the Philadelphia dance community. But at the encouragement of colleagues, I am using my editorial discretion and posting this, as our readership now extends way beyond the borders of this region. Besides Philadelphia, New York and Toronto have also become second/third homes for me over the past five years for personal and work related reasons.

On my recent visit to Toronto, I attended Mamela Nyamza’s The Meal, as part of Canadian Stage’s three-week Spotlight South Africa festival, running this month from April 8th through the 25th.

Advertised as a dance program, The Meal was in fact dance theater, or perhaps just theater, with the dance component of the program being more of a prop or thematic tool around which to weave the plot.

Upon climbing the stairs to the Berkeley Street Theatre, one finds a young black dancer (Mamela Nyamza) writing endlessly on a scroll of paper “I must not have a big bum”. This is an attempt to set the trending theme in the dance world of how a black dancer’s body is perceived and often discriminated against in the stereotypical white world of classical ballet.

As one enters the theater, an elderly white woman (Dinah Eppel) sits in absolute stillness until joined by Nyamza. Dinah’s role shifts continuously between storyteller, musician, mother figure and ballet mistress. She instructs and encourages Nyamza in the “ways of ballet”, weaving a false braid in to her hair, and in doing so forcing her to conform to the rigors of ballet “bun head”.

Nyamza dons a pink tutu with great pride to begin learning the choreography for The Dying Swan. Nyamza’s own ballet training becomes more than apparent with her beautiful lines and flowing movements, which leaves traditionalists like myself just wanting to see her dance. Her movements are quickly interrupted by the generation of birdlike “quaking” sounds, breaking the solemn nature of the piece. This interjection of humor becomes a continual reminder of the absurdity of trying to be something that we are not.

Nyamza is then joined by a younger dancer, Kirsty Ndawo, who also dons a pink tutu and under her tutelage begins to learn the classical steps necessary to become a ballet dancer. Increasingly, indigenous movements and native chants in Xhosa, one of the official languages of South Africa, are woven in to the dance. At first comical in nature, the movements, poses and words turn to underlying anger, shaking fists, tears, hurt and despair. Here the theme appears to move away from an examination of the black dancer’s body to a confusion of messages – the defiance and pain suffered by countless South Africans in overcoming apartheid and colonial thinking, the pain of being something one is not, and a reclamation of one’s own heritage.

To this end, choreographer Nyamza creates what could have been a poignant ending. Set to the musical finale of Swan Lake, the two dancers intertwine and lock in a tight embrace, with the younger Ndawo removing the braid from Nyamza’s head, freeing her to return to her true indigenous appearance and self.

After this crescendo, we are brought back to a series of violent, transformative convulsions on the floor, leading to the covering of the tutus with native blankets and the preparation of a meal over a smoking flame. If the metaphor of the meal, as described in the program, is to be an examination of a the division between the creator and those being served; or even the examination of the process in which the eater becomes one with the meal, it is completely lost at this juncture of the program and appears to be a superfluous interjection at best.

As if two endings were not enough, a third is offered as all members of the cast join hands in song, indigenous dance and chants, with a rather cliché message of the importance of being oneself, while offering up a notion of healing and paying homage to fellow South Africans.

After an evening of dining on The Meal, I found the individual components to be full of flavor but somehow the ingredients just never combined to give me a fully composed dining experience, leaving me in the end still hungry.