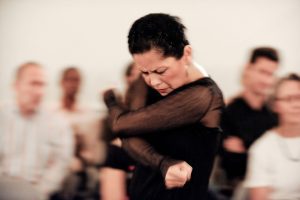 On April 10th, the Leonard Pearlstein Gallery at Drexel University was transformed into a city, allowing its residents to travel from town to town, experiencing flamenco against the backdrops of the large-scaled paintings of Lithuanian artist Ray Bartkus. Like gypsies, musicians, dancers, and singers claimed the space of the gallery by taking the audience on a journey that explored femininity. Directed by Elba Hevia y Vaca, performers of Pasion y Arte, presented “Cosas de mujeres” (Things of Women). The wooden platforms, the dancers, the complex footwork, the downward glance of the performer’s gaze, and the aftershock of the working leg effervescently walloping the floor, were all foregrounded while the oversized paintings shrunk in the background.

FLAMENCO IN A SONG

Her voice soared with affirmation – joy

Her voice quieted with acceptance – peace

Her voice stung with determination – defiance

Her voice broke with despair – sadness

Her voice bled from memory – regret

Her voice rejoiced with sincerity – truth

Her voice delivered a blend of resilient vulnerability – woman

A tripartite art involving singing, dance and guitar playing simultaneously (as well as hand clapping and vocal cheering), Flamenco is a Spanish folk dance used as a musical outlet. Barbara Martinez’ voice permeated the air space as she told many stories through songs, riding on the sounds of Guitarist Ricardo Dias and percussionist Francisco Zaya. Each used their instrument to harmonize with the sound of the throbbing floor, creating a Spanish blend of history and her-story.

FLAMENCO IN AN “ABANICO” (fan)

Covering her face, the fan shifted from side to side.

It became a mask, a facial apron

The fan closed then opened

Something to hold, it held something

But what did it represent?

What symbol held its meaning?

Splayed out in red, itself an instrument.

Making sounds as it connected with the hand.

The suddenness of the closing fan is abruptly urgent and urgently abrupt.

Dancers Alexa Miton, Amelia Hernandez, and Elba Hevia y Vaca rapidly pound the wooden squares on the gallery floor. With each circle of the arm and loop of the wrist, they presented strength in their carriage. A sensual display of rhythm in motion, these dancers macerated the space with whisking feet.

This site-specific work allowed each dancer to harness her womanhood by bringing to life the feminine objects that are often used in flamenco.

FLAMENCO IN A SHAWL

Fringes lingered as it hung from her still form

Her back spoke to me.

A covering, a prized possession, an offering

She carved the space that directly confronted her

Modern Dancer KC Chun-Manning added a layer of contemporary smoothness to the already strong legacy of flamenco as a classical form. Her bare foot was a surprising juxtaposition to the traditional flamenco shoes that housed nails in the sole on the toe, the balls of the foot, and heels, to bring out the sound with footwork ablaze.

This weaving of forms acknowledges the blending of styles that anchor the old but welcomes the new.

Her legs directed the flow of this full-bodied organism

Never still, it awaited the command of its master

This flowy appendage carefully swept the floor with ease

This vineyard of fabric was both willing and willful

Saying yes to being tamed

Germaine to the earthiness of the form,

This worn instrument was potent in carriage

But became drunk from being maneouvred

It followed the master

stomped their feet, allowing their pelvises to vibrate.

With each vibration, their bodies echoed from within.

Their soulful dictations of untamable vigor shouted throughout the gallery as

Their bodies ravaged the space.

No one was untouched, no one unmoved.