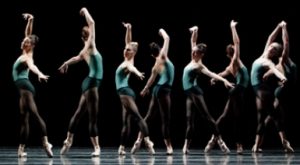 Philadelphia dance audiences will have the welcome opportunity to see “The second detail,” choreographed by William Forsythe, when the Pennsylvania Ballet presents a company premiere of the work on a triple-bill in early June. The piece is set to a score by the contemporary Dutch composer Thom Willems, a frequent Forsythe collaborator.

William Forsythe is an American choreographer who trained at the Joffrey Ballet School in New York and then danced briefly in the Joffrey corps before joining the Stuttgart Ballet in 1973, at the age of 23. He began choreographing in Stuttgart and eventually became the company’s resident choreographer. In 1984, he was appointed director of the Frankfurt Ballet, where he went on to create a body of groundbreaking works.

“The second detail” is one of Forsythe’s earlier dances, choreographed in 1991 for the National Ballet of Canada. During this period in his career he made a series of what he refers to as “ballet ballets.” These works are stripped-down, non-narrative ballets performed in practice clothes, inspired by the choreography of George Balanchine.

In a 2012 interview (Movement Research) Forsythe explained that when he was a dance student in New York he went to see the New York City Ballet “for a dollar every night.” He was transfixed by Balanchine’s dances, and couldn’t understand how they could be at once so simple, and yet so complex.

In his very first attempts at choreography, Forsythe said that he endeavored to make ballets like Balanchine, and was “absolutely murdered” for being imitative. He thought, “Balanchine is the best! Shouldn’t you try to imitate your models?” As he continued to grow as a choreographer, he eventually realized that rather than imitate, an artist must create his/her own model before being “allowed to enter the conversation.”

Indeed, as his career progressed, Forsythe pushed beyond Balanchine’s choreographic innovations to create something completely new. In a 2009 interview (Sadler Wells), Forsythe recalls a breakthrough he had in 1981 when he was choreographing “In the middle, somewhat elevated” for the Paris Opera Ballet: He showed a ballerina a movement he wanted her to do and she burst out laughing, saying “You can’t do that, it doesn’t exist!”

“She recognized it wasn’t in the canon…everything was legal…it was a combination of a pas de chat and contretemps at the same time. She immediately realized that it didn’t follow the rhetoric of ballet,” remembers Forsythe. “And that was a sort of turning point. I realized “Oh my goodness gracious,” and then I really went for it!”

Forsythe was making these discoveries at the same time that Deconstructivism as a post-modern art movement was emerging in the late 1980’s. The movement had already revolutionized the field of architecture in the 1970’s, when deconstructivist architects sought to break apart the concept of classical order and space. The Frank Gehry designed Guggenheim Museum in Bilbao, Spain is one of the widely recognized examples.

Deconstructing features a lot of chopping up, layering, and fragmenting – thus disrupting our conventional ideas about form. Deconstructing is about deforming conventionally structured spaces so that the elements within that space are forced into new relationships.

In “The second detail” Forsythe employed similar techniques to take apart and then put back together the classical order epitomized by the choreography of Balanchine, who Forsythe considered “the best.” Working from within the classical ballet tradition, Forsythe questioned the established “rules” of ballet, thus revitalizing and opening up new possibilities for ballet to move forward.

“The second detail” is a jazzy and playful dance. It features recognizable yet exaggerated ballet positions, hip thrusts and gyrations, flexed hands, crisply articulated and robust movement – all delivered at a lively pace. It is visibly evident to the ballet watcher how Forsythe has taken apart the usual ballet steps and then reassembled them in new, unexpected ways.

The anticipated flow of ballet steps, one into the other, is interrupted. Established transitions between steps are purposely omitted, so that movements seem to materialize out of nowhere. Sometimes it looks like the steps are being danced backward, as if the dance is turning itself inside out. Pedestrian activities such as walking, running or lying on the floor suddenly explode into full-tilt dancing, without any form of preparation.

The focus of the dance is diffused, as choreographic structures come together only to dissolve as quickly as they have appeared. There is a lot to see in every moment: solos, duets, and background groups are juxtaposed and layered according to Forsythe’s unique exercise of visual and rhythmic counterpoint. The overall effect, however, is not chaotic, but invigorating – like a breath of fresh, cold air after being closed-up in a warm, stuffy room.

Indeed, the NY Times dance columnist Rosalyn Sulcas remembers the “shock and excitement” she experienced when she first saw a ballet by William Forsythe. “It was certainly ballet…but in such a radically new context that I could scarcely believe what I was seeing…after years of feeling bored by, yet still drawn to ballet, I had seen something that made me want to renew my connection to the art.” (William Forsythe: It Starts From Any Point)

Over the past five years, the Pennsylvania Ballet has been steadily adding William Forsythe’s “ballet ballets” to its repertoire. “The second detail” joins these other works as a propitious exploration of how traditional of ballet, which grew out of the Renaissance courts of the 15th and 16th centuries, can move with relevance into the 21st century. And that is surely something for ballet fans to celebrate!

Originally from the west coast, Jane Fries pursued undergraduate studies in dance at San Diego State University, where she got her start writing about dance for the student newspaper. After an escapade as a correspondent for Dance Magazine in the south of France, she went on to earn her MA in dance from Mills College in Oakland, California. Jane's subsequent explorations in non-theatrical dance forms led her to take up the practice of yoga. She has lived in the Philadelphia area since 1996, and has had the great pleasure to study Iyengar yoga with Joan White. Jane's writing reflects her background in dance history and interest in documentation and preservation.