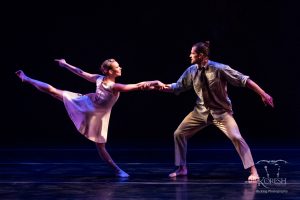 Koresh Dance Company is always in the midst of heavy touring before their hometown spring performances at the Suzanne Roberts Theatre where choreographer Roni Koresh usually presents new work. It is impressive even for the prolific Koresh to create “Aftershock” a 90 minute opus about the cultural dynamics of emigrating from Israeli as a young man. The 13-scenes of Aftershock muse on variations of the theme of being at home ’in your own tongue’ however far from you are.

With narrative philosophical cues in voice over poetry by Karl Mullen, the words inspire lots of Koresh‘s choreographic signatures, remembrances of dance past, but his most potent sections in Aftershock and the most evocative, are the new choreographic territory Koresh continues to explore.

The gripping opening ‘Then’ scored a fated chorale from Mozart, laced with Mullen’s verse, is a cinematic tableau of Roni’s military service in Israel, a scene-de-actione of the somber corruption of youthful esprit interrupted by violence. The configurations, rhythms and pulse, tap a new vein in Koresh’s vocabulary.

‘All Is New’ depicts the cultural shocks of an émigré’s adjustments in an adopted country, with expressions of the drill of a stranger in a strange that but also implies a chronicle of this being a lifelong experience for many.   The trio ‘Change’ illustrates this as Asya Ziatina, Devan Sullivan and Fang-Ju Chou Gant keep readjusting the their dance commanding each other ‘change’ and cope with being dictated to by an arbitrary dominate culture.

The full company comic interlude ‘Gare Des Etreintes‘, has the dancers lined up ala a Chorus Line, mugging to the audience and breaking out in jerks and spasm to a musical burlesque by Henry Torgue and Serge Houppin. Soon they are moving in calmer waves, but Jessica Daley goes into a meltdown and Joe Cotler looks like he was catching fireflies in the asylum day room.

Meanwhile, what is life without romantic relationships to consider. At one point, the men are in a ritualized circle with Hassidic movement expressing male bonding and community, the women on the other side of the stage in a more freestyle dance (This section is one that begs for expansion). As Roni expresses issues of multi-culturalism, there are autobiographical duets of love lost and won, with the dancers portraying moments and qualities of the relationships.

‘Hope Avenue’ with Joe Cotler and Krista Montrone in young couple street clothes and looking like they are just starting a beautiful life together, but Koresh soon has them in crunched body tangles and repeated motions and even though they kind of skip off arm in arm, it soon might a solo dance.

‘Chameleon’ danced with the sensual aura of a Truffaut film has the lithe and witty couple Robert Tyler and Jessica Daley, in a sensual foreplay of a dance, without a care on a long ago summertime tryst at the beach. ‘Alive’ with Melissa Rector and Micah Geyer is a somber revisit, but suggests that this couple is deeply in love and that it is difficult. Frequent partners, Rector and Geyer untangle the crowded phrases and their clarity of movement is hypnotic.

A stunner of the closing vignettes features Asya Zlatina in the primal dance scream solo ‘Who We Really Are’ and in the final section titled ’Aftershock’ there is a cathartic meditation as Rector and Bramham draw around each other recoil on the floor against a galaxy of stars.

‘Aftershock’ is an ambitious long-form work, danced with conviction and passion. Some of lengthier sections hint at filler and should be tightened or edited. But whatever adjustments are made, this is destined to be vintage Koresh.

The concert opened with the spirited Koresh Youth Ensemble dancing choreographer Melissa Rector‘s cool configurations of ‘Forward.’ Rector has been slowing down her breakneck style for her young dancers lately and the tempos are making the troupe look all the more impressive.