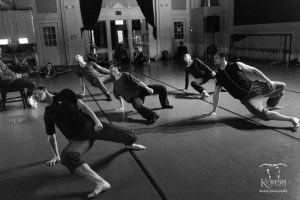 There are tastes, sounds, smells, and feelings that you become accustomed to because they rewire a memory that warms you.

These memories are anchored in sound perfection, never to be altered. Changing them would shift the pleasure they bring and modify their effect on your senses.

When you go to the theater to see the Koresh Dance Company, you know what you’re going to get; Great dancing, intricate choreography that combines raw athleticism with classical ballet, percussive sounds that include vocalization and body slapping to create complex soundtracks, and without fail, a pleased audience.

But there is a fine line between expected pleasure and satisfying predictability.

After seeing the Koresh Dance Company more than a few times, I have grown to appreciate the aesthetic of the company. Still, I often wonder what the dancers would look like moving in a different way, with a different sensibility, to a different sound.

On Thursday March 26th, Koresh’s Aftershock premiered to a full house at the Suzanne Roberts Theatre.

Clawing at their bodies with intense stares.

A reach, a jerk, a slap of the thigh.

An outburst, a gesture.

A walk, a chug, a battement.

Contracted bodies that react to the intensity of the music then vicissitude to display an elegant classical lines.

The Koresh Dancers do all of this incredibly well.

But although Aftershock offered the satisfaction and pleasure of familiarity, I wanted a hint of surprise.

Aftershock had thirteen sections demonstrating various experiences with migration. Oral texts built into the soundtrack, helped guide the viewer and amplified a journey that gave insight into Koresh’s own passage.

As an immigrant, I searched to find myself in Aftershock. I wanted the stories of leaving one country and moving to another, to shed light on the universality of migration, but I came up short. Although the first section THEN, flawlessly captured the urgency to migrate, some of the other sections weren’t as successful in giving insight as why he named the show Aftershock. THEN offered a whimsical soundscape that included a poem by Karl Mullen. Eased into an arrangement by Mozart and including the clicking of a typewriter, THEN was task oriented and action driven.

Trios and duets paraded the stage with urgency. They slithered, marched, and crawled as if crossing borders, swimming seas, and creeping across fields.

The dancers macerated the space until they formed a line downstage while facing upstage. A duet ensued.

This allegorical barrier served two purposes; first, the dancers in the line were spectators observing the duet. Then the dancers became a gate, distancing them from the audience.

A duet in GIVE IT ALL UP showed the methodical sturdiness of Micah Geyer and the quiet trusting nature of Shannon Bramham as she cautiously approached him with the skilled awareness of her trained body. With music by Taksim Trio and spoken words by Shane Dodd, this reflexively earnest duet had moments of controlled eroticism. I took a snapshot of the moment Geyer hiked Bramham’s hips with his foot before he judiciously led her through the space until he prudently lowered her onto his thighs. This duet was a thrilling reminder of why Koresh is a master of making dance.

HOPE AVENUE was performed by Joseph Cotler and Krista Montrone. The soft, breathy quality of this duet was a welcomed change after the robust crux of the former sections. Stamina and endurance were replaced by elasticity and poetry. Canvasing the space with placid transitions and a keen physical intellect, Cotler shone as a partner and as a soloist. Montrone exhibited tremendous technical adeptness as she owned the stage. She engaged with Cotler, using him but not needing him. The two were beguiling and steadfast as they breathed into each other, being careful not to detach.

CHAMELEON was among the least successful sections as I kept examining the duet for a connection between the choreography and the title. Contextually, I understand how cultural transformation can be inevitable when calling a new place home, however, this idea was not fully conveyed and I was left in a state of confusion. Dancers Jessica Daley and Robert Tyler added humor to the duet with their animated gestures and playful execution which did very little to dislodge my perplexity.

Mention must be made of Melissa Rector and Asya Zlatina, whose presence pierced your memory. They executed Koresh’s choreography with exactness, earnestness and proficiency.

Pleased and satisfied, the audience exploded in an ovation that revealed that there maybe truth to the old adage, “if it ain’t broke don’t fix it.” This proved that Koresh’s expedient familiarity could become that cozy blanket for the people of Philadelphia. 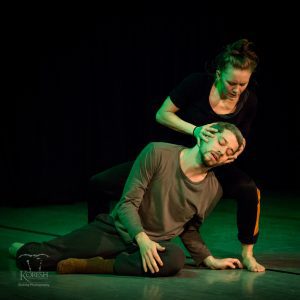