BalletX is, to put it frankly, on fire.  Their winter series, which features the contemporary, quirky choreography for which the young company has become known, runs through Sunday providing Philadelphian’s with the perfect antidote to the winter blues. 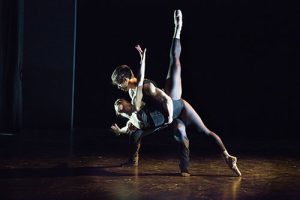 Starting the evening off is a world premiere by the pint-sized Filipino choreographer Norbert De La Cruz III.  There is nothing small about Talsikan, however.  The ensemble work tackles themes of constriction and artifice, so central to classical ballet.  The dancers appear in black corsets with long channels of boning sticking out; they manipulate them into different shapes throughout the piece, suggesting wings, tutus, tails, jump ropes and everything in between.   Under Cruz’s investigation, the point shoe becomes everything it is not supposed to be: an instrument of percussion and the work reaches a spectacular crescendo that’s part Stomp, part Momix, and part feminist literary theory as the curtain descends, obscuring the dancer’s torsos as they begin tapping out polyrhythms on the stage with their discarded pointe shoes.  An original score composed and performed by Ben Juodvalkis heightens the drama of the work by combining exotic rhythms with techno-eqsue beats and dancer Andrea Yorita was particularly captivating.  I can’t wait to see what Cruz creates next. 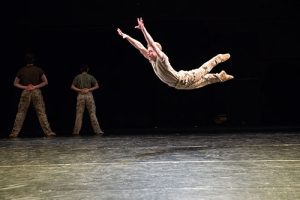 Triptych, choreographed by Val Caniparoli and inspired by a series of photographs featuring British soldiers before, during and after deployment to Afghanistan, was less successful.  The company was exuberant as always, lighting circles around the stage in a series of well-timed leaps, but the military references were too obvious: army fatigues, salutes, lines of dancers standing at attention with hands clasped behind their back, and the choreography never seemed to match up to the clichéd gestures and ambitious theme.  Then again, war is always a tricky subject to choreograph and I did appreciate the restraint in glorification. 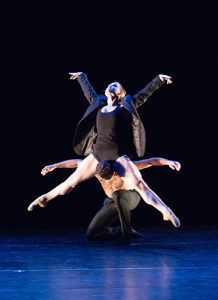 Next up was a revival of Amy Seiwert’s It’s Not a Cry, which I reviewed when it premiered in 2011.  Back then, it was performed by Chloe Horne and Barry Kerollis; this time around it’s Chloe Felesina and Richard Villaverde, who “twist and tangle” as a I wrote back in 2011 to a Jeff Buckley cover of Leonard Cohen’s Hallelujah.  The exacting pirouettes and perfect arabesques are still there and Felisina’s blazer serves to both connect and constrict the couple.  Though short, the duet manages to encompass everything that is ugly and beautiful, commonplace and extraordinary about love. 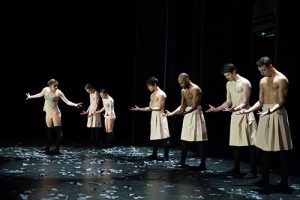 The highlight of the evening comes with Cayetano Soto’s Malasangre, a US premiere set to the music of Latin jazz sensation La Lupe.  The Spanish choreographer walks the delicate line between appropriation and inspiration, between creating pastiche and paying homage, with maturity and perfection, ignoring the temptation to fill the stage with theatricalized, ballet-ified salsa and instead creating a throbbing movement vocabulary that fuses Fosse with the occasional flamenco-esque port de bras.  The five male dancers and two females perform in knee socks, but it’s the men who wear the skirts and the women who wear the (very short) pants.  Skyler Lubin was especially infectious and Gary Jeter II’s exaggerated eye movements move the audience first to joyous laughter and then to a well-deserved standing ovation.

Performances will continue throughout the weekend, including Sunday night.  On Saturday afternoon, fans can head to the Wilma for the company’s “A Pie, a Pint and the Process” featuring a discussion with Artistic Director Christine Cox, choreographer Norbert de La Cruz III and PA Ballet Principal Dancer Lauren Fadeley.