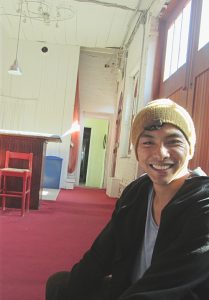 To Dance or not to dance? That question many dancers face after many years performing as they mature and face aging, But for Filipino-American choreographer Norbert De La Cruz III, it was a question pondered from the beginning of his career.

In 2010, de la Cruz was finishing his dance training at Julliard, De La Cruz knew he wanted to work with BalletX after seeing pieces that BalletX artistic director Matthew Neenan created during his artist residency there; he even auditioned for the company. He didn’t end up dancing for them, but Flash forward to 2015 as de la Cruz’s ballet ‘Talsikan’ which will have its premiere on BalletX’s Winter series. Also on the program are works by choreographers Val Caniparoli, Cayetano Soto, and Amy Seiwert

In an interview earlier this in between rehearsals with BalletX dancers at the Performance Garage, De La Cruz recalls that decisive time when he was just starting out professionally.   He said he had been already studying choreography and composition on his own time, but “At Julliard it was never in my mind to pursue choreography, I wanted to be a dancer.”

But fate (& performance butterflies) intervened, when the De La Cruz showed his own choreographic work as part of his senior dance presentation and was noticed by Tom Mossbrucker and Jean-Philippe Malaty, co-directors of Aspen Santa Fe Ballet, who happened to be in the audience. Afterward they approached him about creating a new work with their company and they “got the ball rolling for me,” De La Cruz said. .

After graduating, Norbert was also carving a fast career as an in-demand dancer, performing in Aspen Santa Fe Ballet, Metropolitan Opera House and Complexions Contemporary Dance, but he said that he never felt comfortable on stage, that for him, in fact, it was fraught with anxiety. Whatever personal doubts he may have had as a dancer, they were not apparent onstage. He possessed powerful lyrical technique and strong partnering skills. Despite his early success, he decided to quite performing to become a full-time choreographer.

“I felt that the stage wasn’t for me. I was very insecure as a dancer. I felt I had more to say through my choreography. It actually was a very easy transition to choreography, “ De La Cruz remembers. Now, he says, “it’s really been fantastic to work with dancers who can embody my movement as well,” he said.

He is also cited for his strong spatial composition on the dance stage, developed in part along side his visual aesthetic working as a portrait, landscape and dance photographer. His choreography approach is to achieve clarity of movement and to make “dance that’s not dismissive to the audience, but not desperate in presentation.” 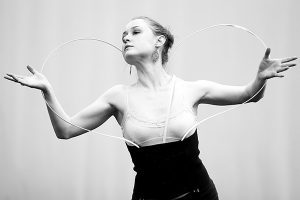 At 26, De la Cruz has received impressive recognition for his work, including the Princess Grace Foundation Award and the Jerome Robbins Foundation NEW Essential Works Grant. He has created ballets for Hubbard Street 2 and Tulsa Ballet II and has now had two acclaimed commissions for ASFB.

De La Cruz said he instantly connected to the dancers and the environment they nurture for guest choreographers. “Such a healthy creative environment here. Communication is clear they give the choreographer so much freedom,” he observed.

BalletX is an ensemble of five men and five women, all with classical training, and they are more and more returning to new choreography with women on pointe. Co-artistic director Christine Cox made that request that De La Cruz choreograph a piece with pointe shoes.

His title ‘Talsikan’ roughly translates from Tagalog, the main language of the Philippines, as meaning the leap of sparks, a splash of water, splattering, for instance “but essentially what I’m getting to is an abrupt lift in the air,” De La Cruz said. 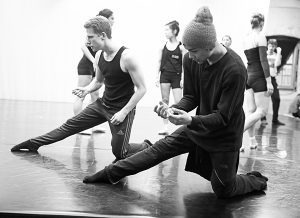 It is his first time creating on pointe choreography and he admits that it was “challenging because I didn’t know the mechanics or what it feel like to dance. So I bought a pair of shoes just to feel what the traction and center of gravity is like. To put women on point, to me, is such a commitment for them. The main question is choreographically, why must one levitate on pointe? What is the need for it? The hyper-mobility, legs in space, the prettiness, I’m not a big fan of flaunting these ideas, but I do like to find the answer to why this aesthetic exists in dance. The pointe shoe exists in the piece as a way to create sound, describe weight a way to propel into flight and different elements based on these shoes,” he explained.

The sounds of the shoes figure in the score by San Francisco-based composer Ben Juodvalkis.

In the months leading up to setting the ballet on the dancers, De la Cruz worked with the Juodvalkis who composed for sections for piano and percussion and De La Cruz suggesting certain sounds be folded in- samurai sword effect, scratching on paper, seeds falling on a Taiko drum- among others, some acoustic and other synthesized effects.

De La Cruz also was working privately with dancers in San Francisco “to generate material that I might use for this work once I got to Philly, then I would rearrange that, based on feedback I got working with the dancers here. From the first day, it was very easy to relay information. BalletX dancers are all soloists, but their quality of moving together in a same heartbeat is striking.” Maybe even Talsikan.

BALLETX WINTER SERIES | February 18-22 at The Wilma Theater, 265 South Broad Street, Philadelphia. Tickets start at $22 for students, $30 for seniors, and $35 for adults