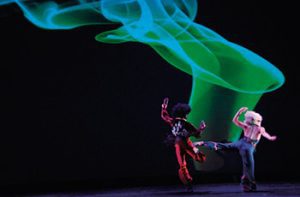 Swarthmore College and the William J. Cooper Foundation present David Dorfman’s PROPHETS OF FUNK on Friday, February 20, 2015 at 8PM in the Lang Performing Arts Center’s Pearson-Hall Theater. Rhythm, groove, and love: PROPHETS OF FUNK is a “dynamic engagement of movement driven by the popular – and populist – funk sounds of Sly and the Family Stone.” Ahead of their time, Sly and the Family Stone is one of the first racially and gender-integrated bands in American music history and solid purveyors of social consciousness. David Dorfman Dance (DDD) celebrates the band’s groundbreaking, visceral, and powerful visions of prophetic love that continues to shine on despite everyday struggles. PROPHETS OF FUNK lifts up the spirit of Sly: that in the face of the funk of life, there are still hopes and aspirations that reside in all of us. DDD will also host a Master Class in dance technique on Thursday, February 19, 2015 at 4:30PM in the Lang Performing Arts Center’s Troy Dance Studio (LPAC 2).

Since its founding in 1985, David Dorfman Dance (DDD) has promoted the appreciation and critical understanding of dance by realizing the creation of new works by choreographer David Dorfman and his artistic collaborators. In advocating his mission “to get the whole world dancing,” Dorfman’s work has enjoyed broad and diverse audiences nationally and internationally. Dorfman creates dance that seeks to de-stigmatize the notion of accessibility and interaction in post-modern dance and add a positive challenge to audiences. By sustaining a vision to create innovative, inclusive movement-based performance that is radically humanistic, DDD maintains a core commitment to examine and unearth issues and ideas that enliven, incite, and excite audiences in dialogue, debate, and social change.

DDD has performed extensively throughout North and South America, Great Britain, Europe and in New York City at major venues, including The Brooklyn Academy of Music, The Joyce Theater, The Kitchen, Danspace Project/St. Mark’s Church, La Mama Theater and The Duke on 42nd Street. DDD is Company-in-Residence at Connecticut College, has its own Summer Intensive at the college, a Winter Intensive in NYC, and appears annually at the Tisch School of the Arts Dance Summer Residency Program at New York University.

The production of PROPHETS OF FUNK was made possible by generous support from The Andrew W. Mellon Foundation, the National Endowment for the Arts, The Harkness Foundation for Dance, The New England Foundation for the Arts, National Dance Project with funding from the Doris Duke Charitable Foundation, The Fan Fox and Leslie R. Samuels Foundation, New York State Council on the Arts, The Jerome Robbins Foundation, and Friends of David Dorfman Dance. Choreographic material for PROPHETS OF FUNK was developed, in part, during residencies at the Tisch Dance Summer Residency Program at New York University and as company-in-residence at Connecticut College.

PROPHETS OF FUNK is the central performance of a three-week residency from February 9 to February 27, 2015 at Swarthmore College titled RADICAL DEMOCRACY AND HUMANISM: INTERSECTIONS BETWEEN PERFORMANCE AND ACTION. Conceived by Professor Sharon Friedler and led by Swarthmore graduate Kate Speer ‘08, the residency centers on engagements with DDD and is supported by critical discussions, workshops, classes, and lectures. Participants and leaders will address a spectrum of positions and assumptions regarding intersecting issues of race, class, gender, sexuality, religion, politics and the environment.