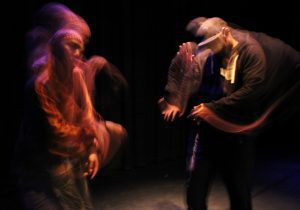 Philadelphia choreographer Rennie Harris isn’t onstage much anymore, but he never officially retired from performing- he just was preoccupied with running his company Puremovement, choreographing and teaching dance in Philadelphia, Los Angeles and Colorado. When butoh artist Michael Sakamoto asked him if he would perform in Flash, an interdisciplinary work they would write, choreograph and develop as hip-hop/ butoh dance theater ‘work-in-progress’ performance, Harris said yes.

They premiered the ‘work-in-progress’ two years ago at the Highways Performance Space in Los Angeles, where Harris admits to having last minute second thoughts, not about performing but wanting mostly to avoid doing any concept of dance ‘juxtaposition.’ Those fears vanished, Harris said, as soon as they hit that stage as their collaboration traversed the porous aesthetic borders between Butoh and hip-hop language and expression.

Sakamoto and Harris talked about their collaboration recently as they prepared for two performances of Flash in mid-December at the Painted Bride Arts Center. Both Harris and Sakamoto have many accolades for their dance-theater work; both are full time professors and choreographers. He is also a full time teacher, in addition to performing and choreographing all over the US and abroad.

“We did the original performance in LA in a shorter version. Each time we perform it we tweak. We did Vancouver, International Dance Festival in March and University of Wisconsin, Madison in April, now the Bride and future dates are being discussed,” Sakamoto said, adding that the work continues to evolve. “It sounds simplistic to say it’s a never ending piece,” Sakamoto explains, “but my attitude is it’s always transforming to what it needs to be.”

Harris jumps in “this is a living work…when there are two different styles coming together, there can be a false idea of’ juxtaposition.’ But really the juxtaposition is only from an external point of view- aesthetic, theoretical, culturally, both movement styles, we’re coming at it the same way,” Harris observes. Harris’ second thoughts about performing Flash was his experience in the concept of ‘juxtaposed’ dance forms and what that implies vis-a-vis audience expectations or perceptions of the particular genres.

Butoh emerged in direct artistic response to the profound nihilism caused by US atomic bombs that destroyed Hiroshima and Nagasaki, at the end of WWII. Harris reiterates that Flash isn’t directly editorial to the times but in a general sense concerns “The body in crisis.” The work is conceived as a “conversation” between the artists’ respective aesthetics.

“If you put a sociological lens on what we are doing those are the frames you could use- post-war Japan and post war urban America. This also boils down to our completely subjective personal narratives.“ He makes the further point that Flash is their “subjective take on what hip – hop and butoh, because to a certain extent we have, I think, a different take than other artists in each of our respective genres,”

Sakamoto met Harris in the early 2000s and recalls “When I went to Graduate school at UCLA there were two people I wanted to meet (opera director) Peter Sellers and Rennie Harris. I knew from dance reviews and articles Rennie was a hip-hop artist who loved Butoh and I was a Butoh artist who loved hip-hop,” he said. “So it seemed we had this parallel language of the body, of movement, of crisis and cultural marginalization.”

Sakamoto said since his early days as a dancer he had the self-awareness through hip-hop he had the ability “of altering space and time with my body,” he recalls. Harris chimes in “Michael was taking a ‘house’ dance class from me at UCLA and that was apparent.” But Sakamoto recalls, “well I did, but, you know, really poorly,” he admits, “if I went to the club, I’d have been eaten alive.”

Harris was introduced to butoh artistry by dancer-choreographer Roko Kawai. “Roko and I were friends and we were collaborating. She was teaching a Kabuki class to the women in my company and we started talking about Japanese art. She showed me a book with photos of butoh and when I first saw it in performance I immediately saw that the dancer was “popping” thinking from the inside out, I connected to that,” Harris recalled.

“I was into ‘quote, unquote’ Asian culture and he was into Black and Latin culture. Two different bodies, mindsets and experiences that are greatly affected by each others’ ethnic identities,” Harris said. “The popper is thinking internally and how to illustrate that on the body. When it becomes performance, it becomes a whole different thing. Same with butoh movement, I immediately identified with that internal-external dynamic.”

Sakamoto interjects “Hearing Rennie now, I think I was already understanding how to internalize like the hip-hop dancers when I was a teen, it was one of the things that allowed me to develop quickly as a butoh artist,” Sakamoto recounts.

“After that my main performance teacher was Rachel Rosenthal, she came out of the modernist Western European tradition and she was also a Cunningham student. For her it was all about creating your own voice. I put that together with what I was getting from hip-hop. Rachel also took me to see Kazuo Ohno when he was 86, dancing a solo piece, after that experience it all clicked for me.” Kazuo Ohno was the legendary Japanese dancer and progenitors of butoh aesthetic and performance.

The intersection of experiences of a Japanese-American artist and an African American artist speaks to that “chaos, contradiction and crisis” of butoh and hip-hop. “So anything we do that is expressive in our own lives is going to be relative to what’s happening socially, economically and politically in the country. We realized that we both have a more philosophical approach, “ Harris notes.

It was time for Harris to prepare to leave for the airport and he was trying to remember the last time he was onstage in Philly. “I basically feel like those days are over, but I don’t feel like I retired, it’s just that no one was asking me,” Harris said. “So when Michael asked I just thought OK, in many ways it was a performance rebirth for me.”

Sakamoto said that he wasn’t’ aware that Harris had not been performing. “I was just nervous because I’m asking Rennie Harris to perform with me,” Sakamoto was assured that Flash as a concept and in performance would work. “I don‘t mean to say that confidently, but because that was my instinct and desire,“ he assured.

As for any apprehensions on Harris part he was convinced “after the first ten minutes, the synergy onstage was completely connected. Not only are we parallel, but the audience was also instantly part of it.” which Harris believes makes all the difference.