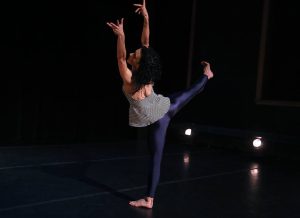 by Kat Richter for The Dance Journal
photos by Bill Hebert

For the past eight years, the ETC. Performance Series, founded and initially directed by Charles Tyson Jr., has provided local dancers with a supportive environment in which to experiment, try out new ideas and strut their stuff.  Although Tyson has handed the reigns over to dancers Lauren “Ren” Williams and Antonia Z. Brown, this past weekend’s performance, which took place at the Community Education Center in University City, upheld the tradition of camaraderie and innovation.

In Elvis Has Left the Building, Philadelphia newcomer Sean Thomas Boyt clomped onstage in a pink lacy dress and heels.  He bopped along to a cover of Kylie Minogue’s “Can’t Get You Out of My Head,” staring at the ground as he teetered from one stiletto to the other.  A change in music and costume unleashed his true prowess as a performer: index fingers extended, he lunged forward like a cartoon version of a matador dancing a fandango, pirouetting on his heels then slicing his arms through the air.  The work’s narrative arc could have used some further development—it read as three barely connected pieces—but Boyt’s impeccable technique was evident and I’ll look forward to seeing more from him in the future.

Double Double This That, choreographed and danced by Kalila Kingsford and Grace Stern was a delightful romp, full of percussive notes and witty choreography.  In black and red, the dancers clapped, stomped, kicked and rolled, alternating levels and downbeats.  Their polyrhythms were a bit off towards the end of the piece but it was joy to watch and showed enormous potential.

Evalina “Wally” Carbonell displayed impressive technique in You Can’t Eat Hope, carving a beautiful rond de jamb en’lair which then spiraled all the way to the ground.  Although the intent behind the work was unclear, it’s juxtaposition of frenzied cheerleader-like moments with slow extensions made for an entertaining performance.

Carbonell later returned to the stage in Coats, a zany sextet choreographed by Meredith Stapleton.  The work had an improvisatory feel, with each dancer taking on a different personality.  Sunglasses and a pair of Crocks upped the comedic ante although I would have liked to have seen the dancers’ personas carry throughout the work.

The program also featured several student performances ranging from Classical Indian dance to tap, which brings me to my final remarks.  Anyone who thinks tap’s heyday has come and gone needs only to take a look around the City of Brotherly Love.  Reggie “Tapman” Myers was an audience favorite with his rapid-fire trick steps and Robert Burden’s signature a cappella choreography shook up the second act.  Comprised of ten student dancers plus Burden, Tap Times featured simple staging but complicated rhythms that changed nearly as soon as they got started.  Each of the students also performed a tiny solo; they were all great but Sean Chilton’s was especially fast and tight without missing a beat.

Applications for the next ETC. Performance Series, which will take place on January 3rd and 4th are now being accepted.  Further information can be found at etcseries.org/wordpress

Kat Richter is a freelance writer and professor of dance and anthropology.  She blogs at www.fieldworkinstilettos.com