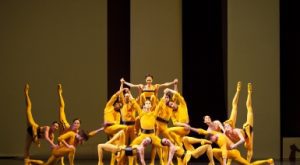 Pennsylvania Ballet’s 50th season was a triumph for the company, both here in Philadelphia, on PBS and at the Vail International Dance Festival, but the resignation of Artistic Director Roy Kaiser, coupled with the retirement of Principal Dancer Julia Diana from the stage and several other changes in the company’s artistic and administrative staff, left fans of the company wondering what the 51st season would bring.

Enter the internationally renowned Angel Corella, former Principal Dancer with ABT, Artistic Director of Barcelona Ballet and sought after guest artist.  The Madrid native began coming to Philadelphia back in the 1990s when his sister Carmen danced for Pennsylvania Ballet; in an interview with Lew Whittington, he remarked about the accessibility and approachability of both the city and the company, and his desire to do more repertory.  Friday night’s Press Play at the Academy of Music suggested that he has found the perfect home, and that the company has found the perfect leader to usher in its next 50 years.

The program included an impressive array of choreographer/composer pairings: George Balanchine to Tchaikovsky, Christopher Wheeldon to Arvo Pärt, Jerome Robbins to Chopin and Alexei Ratmansky to Stravinsky.  The final work of the evening, Ratmansky’s bold but playful Jeu de Cartes, was visually intriguing with large white set pieces, a triangular shaped ramp and dancers changing from purple leotards, tights and shoes into yellow as the work progressed.  They danced the zany choreography with gusto but the lack of precision in several places gave the larger-than-life work a sloppy feel.

This, however, was my only quibble.  Other Dancers, choreographed by Jerome Robbins, comprised a sweet and lilting duet danced by Lauren Fadeley and Ian Hussey.  Fadeley was, as always, charming and picture perfect in a soft blue gown.  Hussey picked up the comedic notes of the piece, getting “dizzy” after a few turns and pausing as if he’d forgotten the steps.  The choreography referenced a number of character dances but stopped just shy of satire, making for a somewhat confused but well executed work.

It was program’s other pas de duex, Wheeldon’s Liturgy, that really shined.  In keeping with the company’s tradition of giving dancers of the corps de ballet their chance in the spotlight, the work paired Elizabeth Wallace with James Ihde.  Motifs of hooked elbows and repetitive port de bras grounded the work, balancing the acrobatic feats made possible by Wallace’s extreme flexibility and Ihde’s control.  Dressed in form fitting blue and white, Wallace seemed to represent bone, while Ihde, in dark red, was muscle; their contortions seemed like an anatomy textbook come to life, beautifully and brilliantly in what was definitely a high point of the evening.

The greatest triumph though, at least in terms of technique, was the evening’s opener, Balanchine’s Allegro Brillante.  I have often found fault with the company’s lack of unison but the ten dancers who performed Friday night laid this particular complaint to rest.  From the moment the curtain rose, revealing four couples in grays and pink already weaving across the stage, to the final pose, which left them in perfectly held arabesques, the dance was everything that a good Balanchine work ought to be: precise, energetic, and rhythmically challenging with intricate canons setting dancers just one or two counts off of one another and difficult patterning that had Evelyn Kocak performing one attitude turn after another.  Thanks to its founder, Pennsylvania Ballet has long history of performing Balanchine’s work and although Corella’s tenure has just begun, last night’s program suggested that it’s going to be an excellent one, with older works done even better than before and newer works with newer dancers leaving audience entranced.