While buying time for a quick costume change at the Philadelphia Museum of Art last night, Christine Cox, Artistic Director of BalletX, shared a story about the company’s residency at the prestigious Vail International Festival of Dance this past summer.  “After we performed,” she told the audience, “People started talking, saying they wanted to dance for BalletX.”  She relayed her surprise, exclaiming “But we’re just a small company from Philadelphia!”

Well, small or not, the company has presented over 50 new works in just nine short years and last night’s bill, which featured eight dancers, encapsulated the company’s signature combination of strong technique and quirky choreography. 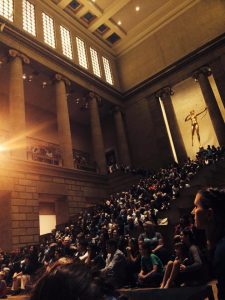 The program began with orchestral trio Murmuration.  Two of company’s dancers soloed alongside the musicians, weaving in and around them in circuitous improvised phrases.  Given the proximity of the stage to the audience, an added source of amusement was watching the many children in attendance as they watched and often tried to follow the dancers.

After a short break,BalletX returned to perform an ensemble work called Slump choreographed by Joshua L. Peugh.  With hunched shoulders and looks of exaggerated boredom on their face, their entrance was conspicuously nonchalant but the dancing was anything but.  Part mariachi at time and part mambo at others, they matched the score beat for beat, sometimes stomping their feet or dropping into deep second position plies while circling their hips with a sort of ambivalent but nonetheless self-aware sexiness.

Dressed in bright colors, complete with fluffy crinolines for the women, they referenced social dance forms from the Charleston to the waltz (the latter of which was literally turned on its head as the men lifted their partners, turned them upside down and whirled around the stage as if it was the most normal thing in the world), interspersing these familiar movements with vigorous floor work and zany love-sick duets.

The excitement of Slump left me wanting more from Peugh’s Valentine’s Day pas de deux but Andrea Yorita performed the work beautifully, holding a number of tricky positions while her partner slithered underneath her.  A second pas de deux, choreographed by company founder Matthew Neenan for his evening length ballet Sunset, o639, which premiered to critical acclaim at The Wilma last July, had more changes in dynamics; it succeeded in being both ethereal and dreamlike but visceral at the same time.

Concluding the evening was one of the company’s staples, also choreographed by Neenan to the music of Beirut.  It was one of my favorite pieces when I first saw it performed several years ago and last night’s rendition, which featured company veteran Chloe Felesina in the lead role, reminded me of why BalletX has become such a popular and important fixture on Broad St.  The work is carnivalesque and circus like, juxtaposing two coquettish ballerinas in bright pink pointe shoes with a host of other characters dressed in lavenders and light blues.

The work reads better on a proscenium stage but the birds eye view offered by the steps of the art museum highlighted Neenan’s use of strong diagonals throughout the piece.  As it reaches it crescendo, four couples carve across the stage, the men performing syncopated torso isolations as the women float around them, adding a polyrhythmic texture to the dance that reflects the rich score.  The company received a well deserved standing ovation.  It’s fall season will kick off on November 19th with the East Coast premier of Neenan’s Increasing in addition to works by Jorma Elo and Olivier Wevers.