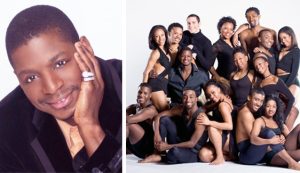 My re-introduction to Philadelphia met me with the many strains of dance that has infiltrated the scene. Old and new companies work hard to either stake a claim or maintain their presence. Independent artists hustle to steer their projects toward the next funder and audiences travel from one performance to the next, always appreciating the buffet being served.

This was dance in Philadelphia and I had a lot to choose from.

Prior to moving to The City of Brotherly Love, I presented a work in Boston and it was my intention to collaborate with an artist in the Philadelphia area to re-stage the piece. I needed eight men of color and was optimistic that I would find them with ease.

Facebook presented me the ultimate networking possibility as I reached out to Shawn-Lamere Williams, Artistic Director of Eleone Dance Company to engage in a conversation about the intended collaboration. The initial exchange was brief but I was abuzz with excitement.

I was invited to the site that housed both the school and the company at 321 S. Juniper Street and I was made aware of the scheduled audition for the second company that was already in progress.

It is important to note that The Eleone Organization umbrellas a school, a second company and a first company – each with its own name but parallel mission.

I received a tour of the facility and then gladly accepted Mr. Williams’ offer to watch his new breed of dancers.

The studio was packed to capacity and the expected nervousness was visible as the young dancers sized up their competition while trying to stay focused. They were given movement sequences from the repertoire and before long were asked to perform in small groups. These young dancers (most of whom are trained at the school), ignited with passion as they took on the task of proving why they deserved to be a part of his group. A beautiful combination of technique and fervor made me smile as I watched the dancers embrace the space with youth, pride, and enthusiasm.

Immediately following the audition, the first company took to the space to prepare for the audition they would host for the main company the following day.

I got to see a more mature group. Alums and current students from Temple University, University of the Arts, neighboring schools, and Eleone itself, followed the directions of Rehearsal Director Dara Stevens-Meredith as she went through movement phrases in preparation for the audition.

The company exuded a dramatic intensity that combined the youthful energy of the dancers and the full-bodied excitement of the repertoire. There was a common unspoken language that permeated the room. They grabbed on to choreography of Stevens-Meredith as it challenged them to use their trained bodies, reminding me of why I started dancing in the first place. The dancers were alive but I was hounded by the fact that for such a strong collective of dancers, the company had not achieved the recognition it deserved.

What was it that held the Eleone Dance Company in the shadows of Philadanco, Koresh Dance Company and Kun-Yang Lin Dancers? Created in 1995, The Eleone Dance Company has garnered a reputation of performing works that challenges traditional boundaries. The Company embodies an artistic and spiritual profoundness that is expressed through the technical ability of the dancers. Through education and entertainment, audiences appreciate the contemporary dance theatre that is demonstrated using multicultural themes.

Here was a company that exhibited all the makings of a solid, competent institution and holds strong to the mission of ushering in the next generation of dancers. They had a sturdy connection to the community and the diverse repertoire that catered to all ages. Their dancers have gone on to have careers that include dancing and choreographing for The Alvin Ailey American Dance Theater, Complexions and international celebrities like Beyoncé, and Katy Perry.

So what has kept the company from achieving the status it deserves? Does the company need a restructuring of their administration? Could a fresh batch of contemporary choreographers re-energize the institution? Maybe new repertoire would attract a new audience? Or maybe it’s just a matter of funding? Most companies struggle with a lack of funding and I’m sure Eleone is no different.

As the rehearsal wrapped up, I felt confident that this was where my next collaboration lived. I held on to the fact that my Saturday evening afforded me a sneak peak at the carte du jour of dance that my new city afforded me. Appetizer, main course, or dessert, the Eleone Dance Company is on the menu and is definitely worth tasting.