In its fourth year and biggest year yet, GayFest! Festival fills in the spare stage offerings of August with an array of theater focused on GLBTQ themes. In the third festival appearance The Bang Group was back, in tails no less, with their show Head Over Heels, a commission from Joe’s Pub in New York that premiered on Valentine‘s Day. It is a song and dance revue conceived by Jeffrey Kazin and David Parker, longtime dance partners on and off stage. Their show is a whimsical look at love, specifically now that there is marriage equality, what changes now, aside from a cache of civil-rights benefits, in the private lives of longtime spouses?

The show is much more dance driven than their last here, 2012’s Misters and Sisters, which had more narrative, but this time they keep it dance driven and Parker‘s choreography has a ligther theatrical arc. The music is a mix of recorded pop and classical music tracks and live keyboard accompaniment by Anna Ebbesen. Kazin and Parker also sing a few songs from old musicals.

The show opens with a tango-waltz number with Kazin and Parker and fellow Bang Group dancers Amber Sloan and Nic Petry, all four smartly dressed in black tuxes and tails. Parker’s weaving couples patterns are punctuated with smoldering stares and comedic partner switching. This is the dance overture to the show‘s themes of a couple getting older together, the occasional wondering eye, for instance, not to mention all of those favorite moves that risk becoming stale.

Parker is most inventive with a tap number by Petry and Sloan have them pounding rhythms in bare feet, and playfully slapping each others arms, backs, and asses, as beats get denser, it skirts the edge of slap-happy and aggressive. Actually, they are the ‘body music’ instruments playing a driving score by Steve Reich.   Not as effective is the couple’s duet to ’Scarborough Fair’ where they express relationship angst. Similarly, a Parker and Kazin duet to a Rossini aria that moves them in rote dance positions while vocalizing catty ‘meows’ is a one note exercise. 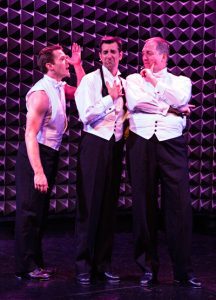 In contrast, the snarky number ‘Moving Right Along’ has the three guys coldly assessing available men singing lyrics like – Too dumpy, too frumpy, too Forest Gumpy or Too peppy, too preppy, too Johnny Deppy– turns into a soft-shoe showstopper. Parker even flies into a ballerina position an his beefy arabesque is manually craned around by Parker and Petry. Settling the question (for the moment) about how size matters in classical ballet- i.e. if Parker does not mind the laughs, it doesn’t matter. Parker also choreographs a classical dance comedy buffo set to Tchaikovsky that has Sloan and Petry hitting the deck hard with ballet pratfalls. Moments later, Petry is picked up by Kazin for a duet that keeps spinning to Tom Jones singing ’What’s New, Pussycat.’

But it is with tap idioms that Parker really shows his choreographic strengths. Parker teases Kazin “Do you still remember any of my old routines?” and Kazin replies, “I not only remember them, I know them better than you!” which sets up a wily tap challenge. They are veteran hoofers and still have fleet feet and precision. Side by side, they illustrate how different they are as dancers. Parker has an old-school intricate patterning and Kazin has lithe, floaty footwork, and when they lock in those exacting unison phrases, they dazzle.

Even with some indulgences, Head Over Heels has a big heart and The Bang Group is tap tight and a steely tap a cappella number has them a tap circle expresses the esprit of this troupe. The show’s finale is a witty and crisp traveling time-step vamp to ’I Want You Back.’ And so did this GayFest audience.