If you are looking for summer dance while on vacation and can’t find any performances to attend, here are two new and notable alternatives- Lucy Moore’s biography Nijinsky, released in Britain last year and now available in the US by Profile Books ($17.95) and Opus Arte’s DVD of Notre-Dame De Paris ($35.95 Blu-ray) by choreographer Roland Petit, in a 2013 revival by Ballet and Orchestra of Teatro Alla Scala. 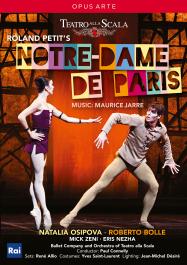 Choreographer Roland Petit brought narrative realism to the dance world in the mid-20th century, with his ballet version of Carmen, and in such artistically gritty works as Homme el la mort. One of his most dimensional ballets is his 1966 adaptation Notre-Dame de Paris, based on Victor Hugo‘s novel The Hunchback of Notre Dame. Two years after Petit’s death in 2011 at age 87, the ballet has been faithfully restored by Ballet Company of Teatro Alla Scala and is a vibrant homage to the choreographer.

The ballet score by Maurice Jarre fits handily for a screen version of a live ballet performance. Jarre is famed for his music in David Lean classic films Doctor Zhivago and Lawrence of Arabia. Petit makes full use of Jarre’s cinematic orchestrals in his choreographic lines to tell the story. The new production was directed by Mahar Vaziez and conducted by Paul Connelly. The original designs were kept, with sets by Rene Alio, featuring abstract Paris vistas and noir interiors. The costumes, by Yves Saint Laurents, keep giving with colorful mod -medieval skins for the Parisian citizens and dark tone couture for the main characters.

Like much of his other work, Petit’s version of the story delves into the psychosexual implications of the characters in Hunchback, as well as Hugo’s broader themes of human capacity for both cruelty and empathy. Quasimodo, who rings the mighty bells of Notre-Dame Cathedral, is treated with horror and mockery by the rabble because of his physical appearance. As the rabble mocks him, the Hunchback, danced by Robert Bolle, is not costumed with back padding, or made up with facial tumors but his angled limbs convey his physicality and its limitations.

Meanwhile, the beautiful gypsy woman Esmeralda captivates the mob with her dancing as she fends off men. The tyrannical priest Frollo is tormented by her beauty as well. Frollo’s violent nature is expressed by his hands moving frantically (cued by a driving tambourine) and his ability to put people under a spell to do his bidding. When she is sent to the gallows for trumped up crimes, observing from the shadows, Quasimodo saves her and shields her in his bell tower.

Petit brings forth Hugo’s theme of about what is considered physical beauty and grotesque. Of course, the kindness of Quasimodo toward Esmerlda, is more meaningful than any physical beauty.

Eris Nezha’s makes Phoebus a lusty, aggressive warrior, but otherwise lyrical lover with gallant aerials. Mick Zeni’s Frollo is a great villain, dressed in priestly black he is a fast and lithe jumper and has expressive port de bra, punctuated by frenetic hand gestures. Esmerlda’s dramatic entrance has the feel of the sequel to Carmen’s famous central pas de deux, but this has so much more to it, especially as danced by Natalia Osipova. Osipova’s impeccable balletic line, fluid point work and thrilling pirouette runs, for starters, just entrance. Aside from her luminous stage (and screen) presence, Osipova’s classical technique is masterful.

Some of Petit’s mechanics for the crowd scenes have an ‘edgy’ look that by now just looks cliché. But not looking dated is Petit’s character choreography for Quasimodo. Bolle, who usually plays princely roles, owns this part emotionally and physically, conveying a body which has endured so much pain, that his ’so called’ deformities are portraits of strength. Many books have resurfaced about Valsav Nijinsky, in observance of the centenary of his landmark ballet Le Sacre du printemps (The Rite of Spring) which, along with Igor Stravinsky’s score, changed two art forms in one night.   Lucy Moore’s new biography of Nijinsky is one of the most comprehensive to come along. As famous as Nijinksy was in his lifetime, he was as mysterious as his characters on the dance stage. Nijinsky in fact spent much his life a recluse, overwhelmed with his legend as a dance god and dealing ultimately with ranges of madness.

Moore begins the book backstage at the premiere of Nijinsky’s ‘Le Sacre‘ which has so many stories hanging on it, they all stick, true or not. Moore throws us into the nail-biting moments before the curtain goes up, with backstage doom impending and a nervous Nijinsky jumping out of his skin waiting for the curtain to go up on an already volcanic creation. Moore leave us there, at chapter’s end, to flash back to Nijinsky’s birth.

It is always the mark of a great biography if the author can make relatives central to the story. Nijinsky’s parents were madly in love, itinerant dancers on what would be the equivalent of a Russian vaudeville circuit, outside the privileges and strictures of the Imperial Ballet world of tsarist Russia, where performers were viewed as servants.

Vaslav was recognized, from the start as a prodigy and he soon was a student at the Imperial Ballet housed in the Mariinsky school. He was bullied by the other males for his poverty and femininity, but was soon enough proving himself on the professional stage, where he was quickly becoming a ballet star. He also artistically assimilated pantomime that he learned being around the circus with his parents and he was greatly influenced by Isadora Duncan’s performances in Russia, which he attended while still a student dancer.

Nijinsky’s artistry catapulted him to the forefront of the Mariinsky Theatre hierarchy he enjoyed patronage from his first male lover Prince Pavel Lvov, who encouraged his professional (and personal) relationship with Ballets Russes Impresario Sergey Diaghilev who was about to present his first season of dance in Paris. Diaghilev seduced him and presented Nijinsky as his star, shifting the attention from prima ballerinas, who till then the male dancers were to be considered secondary and certainly not overt objects of desire. Nijinsky alone changed the status of men in dance, who were relegated to roles always in support of the ballerinas. He completely sexualized the male dancer onstage.

Meanwhile, Nijinsky was taking his dancing into a new realm and his choreography for Afternoon of a Faun, which required hundreds of rehearsals over a year, introduced groundbreaking concepts of abstract expression in dance. It was the dance equivalent of cubism in painting and the apotheosis of primitivism and modernism. Moore, until this book not a dance writer, here too, writes with scope and depth about the artistic impact of Nijinsky’s talents and problems as a choreographer.

Much of the book covers Nijinsky tumultuous relationships, his problems with deal with his emotions and sex. Nijinsky made a conditional deal with Diaghilev and loved him as long as he behaved. They were sexually incompatible and Moore reports that Nijinsky didn’t like to have sex with him, but that he was also repulsed by the idea of sex in general. Nijinsky starting rebelling against Diaghilev’s control, embarrassing him in public and picking up female prostitutes to experiment sexually.

Moore fills in so many vague areas of Nijinsky’s private life, without judgment. The fluid nature of male sexuality, for instance, is saliently examined vis-à-vis the mores of the time. Even as Moore proves that Nijinsky willingly entered into a full relationship with Diaghilev, she makes the most plausible case that he pimped himself out for art and to continue to help his family financially. Romola is portrayed throughout as having a delusional, possessive nature and a clear agenda, initially making a career of first getting Nijinsky away from Diaghilev. They married as virtual strangers while on tour in South America and even though the marriage was dysfunctional, with periods of separation, they raised two children and Romola, in her way did what she could to take care of his interests.

Nijinsky was devastated when Diaghilev dismissed him from the company. He also started to exhibit not only signs of emotional strain but such erratic behavior that it was impossible for him to honor his professional commitments. After disastrous tours of the US and, back with Diaghilev, Nijinsky was paranoid and exhibiting signs of schizophrenia.

Moore magical theatrical worlds of Paris, Moscow and London of the time. The specificity of the trappings of this lost world is a deep field study unto itself and Moore’s   imagery of architecture, theater interiors, city streets, clothing that is vivid conjured.