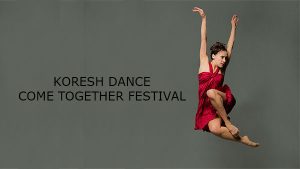 Koresh Dance Company will connect established companies, new faces, repertory favorites, and fresh choreography this summer when it presents two dozen local and regional dance companies in its Come Together festival at the Suzanne Roberts Theatre. The festival, which began in 2013, celebrates the diversity, creativity, and technical excellence of Philadelphia’s dance community. From July 23rd to the 27th, its mixed programs will stage modern dance alongside tap and contemporary ballet, juxtaposing distinct styles from the hip hop of Rennie Harris Puremovement to the acrobatic physical theater of Brian Sanders’ JUNK.

Koresh Dance Company, a city staple since its 1991 debut, constantly seeks new life for Philadelphia dance. Artistic Director Ronen (Roni) Koresh values collaboration with regional companies and choreographers, and launched the Come Together festival last year to provide a platform for networking and mutual support in the dance community. This year’s roster includes returning favorites BalletFlemming, Kun-Yang Lin/Dancers, and the Rock School for Dance Education, as well as 21 other companies representing a wealth of dance styles, traditions, and voices as diverse as the city itself.

Philadelphia is a city that moves, and a city that takes pride in its dancers. In presenting Come Together, Koresh Dance Company not only unites Philadelphia’s powerful choreographers and spectacular performers; it also joins public art programs like SEPTA Art in Transit and the Mural Arts Program in celebrating dance as an integral part of Philadelphia life. Hip hop artist, photographer, and filmmaker Raphael Xavier, who returns this year to perform in his second Come Together, calls the festival “a great opportunity” for dancers with diverse areas of expertise to motivate and learn from one another’s craft. “I was inspired by other artists’ work,” Xavier comments. “It made me realize I have to keep pushing towards a high standard of performance art and dance.”

Koresh embraces the mission of highlighting local dance and cultivating new dance audiences, and developed the concept for the Come Together festival as an outgrowth of its ongoing Showcase series. Koresh Artist Showcases offer an affordable night of stellar dance several times a year. They also provide a professional performance venue at no cost to small and emerging companies. Recent Showcases have featured traditional Indian dance, ballet, salsa, contemporary, spoken word, and tap in the black box theater at 2002 Rittenhouse Square. The company renovated and moved into this studio building last year, and is currently conducting final fundraising to complete the purchase of their new home.

Since emigrating from Israel, Roni and his brother Alon Koresh, the company’s Executive Director, have been active in the Philadelphia dance scene for nearly 25 years. They both recall the generosity and artistic solidarity that furnished their early opportunities in the city—the foundational steps that led to the founding of the Koresh Dance Company and School. The Koresh brothers feel that it is their turn to contribute performance opportunities to the city’s young and innovative choreographers, and to bring its luminaries together for five dazzling nights of dance.

For the full schedule along with more information on Koresh Dance Company and participating companies, visit www.koreshdance.org.

About the Koresh School of Dance, Outreach, and Community Development
The Koresh School of Dance, established in 1993, welcomes over 20,000 students every year to classes at all levels and for all ages. In 2013, Koresh Dance Company reaffirmed its commitment to Philadelphia by purchasing a property in the heart of Center City. There, the school extends dance education and performance resources to its community by presenting emerging artists in bi-monthly Koresh Artist Showcases and providing professional training and performance opportunities to the exceptional dancers of the Koresh Youth Ensemble. In 2013, Koresh launched the now annual Come Together Festival, which in its first year presented 27 companies in 11 performances over 9 days. Koresh Dance Company is committed to community-building and outreach. While on tour, the company provides post-performance discussions, residencies, open rehearsals, lecture demonstrations, master classes and video discussions to its audiences. At home, Koresh Kids Dance brings arts education to economically disadvantaged elementary-school students by partnering with Philadelphia public schools to provide free weekly dance classes, promoting children’s creativity as a conduit for non-violence and life goals.