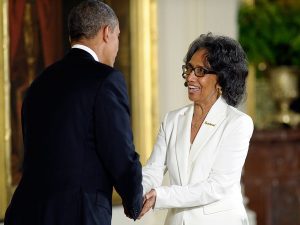 It was Diversity of Dance day at the Barnes Museum on the Parkway on June 1 and dance fans and art lovers converged, filling the Annenberg Court for some authentic Irish dance by The Coyle School of Irish Dance and later joining two couples from the Estilo Dance Studio for basic patterning instruction in salsa and mambo.

A smaller crowd stayed for a lecture about Matisse’s dance studies with the works of art themselves hanging in the gallery and followed by an expertly moderated discussion by KYW cultural reporter Cherri Greg with Dr. Brenda Dixon Gottschild and Philadanco founder and artistic director Joan Myers Brown about the history of dance diversity (and the lack thereof) in Philadelphia. Dixon-Gottschild’s most recent book The Audacious Hope of the Black Ballerina, is a bio-history of Brown, Philadanco and the legacies of African American Dance in Philadelphia.

For Brown and Gottschild, this isn’t just about a legendary past breaking barriers, it is a vital ongoing discussion, as many of the same issues Brown faced trying to establish herself in classical ballet, are relevant now in a still predominantly white, Euro aesthetic world.

Brown got right to it commenting “Look at the cover of Pointe Magazine this month, they’ve got three (black) ballerinas looking like they are ready to doing Beyonce, they still don’t (visually) proclaim that they are ballerinas, they aren’t in tutus, so to me that is offensive, it‘s still not open, I‘m 82 and I‘m wondering when it‘s going to change.”

Joan Myers Brown recounted how she got started as a dancer in Philly. “I got interested in high school in West Philadelphia. My gym teacher was with Littlefield Dance, so she encouraged me to come after school and be part of the company. For two or three years I was the only black student.” Later, Brown’s mother enrolled her in the Sydney School on South Broad St. “but when I got there I had learned so much from my gym teacher, that I started teaching at 17.

Greg spoke to the “rigidity” of ballet training for black dancers used to dance disciplines in black culture and Gottschild clarified that perception, explaining, “The rigidity of ballet and race are two different issues. There was and is no reason why that dancers from the African American Diaspora wouldn’t be able to be ballet dancers. And there are so many well trained ballerinas of color…ballerinos (her updated term for male danseurs) of color.”

Gottschild recalled what black dancers faced when in the last century. “You can imagine what the race and cultural landscape was then, even in Philadelphia, which was referred to in black communities as ‘up South.’ There were very harsh lines of segregation. But, there were incredible people who knew that “we could do that.” She cited the African American and Latin dancers and teachers found ways to break down the barriers, even when they knew it was not going to change the entire field.

“A turning point for JB was her associations with Anthony Tudor; the wonderful English choreographer was choreographing in Philly before he went to New York. But you know, he choreographed La Sylphide here and put JB and another black dancer in the corps,“ she said. The reviewer for the Bulletin referred to them in racially derogatory terms and essentially saying their presence ruined the performance.

Whatever the realities of segregation and racist circumstances Brown refused to be shut out of training or performing. “I always took ballet classes. I went to every school on Chestnut and Walnut Street trying to get a ballet class and was told ‘we don’t teach black dancers.’“ The first time I was able to take a ballet class in a white world was at the National Ballet of Canada. “New York was a little more open than Philadelphia. I had a scholarship for dance and went to the Katherine Dunham school in New York.”

Brown talked about her whirlwind years that Brown danced in shows and revues with legendary black performers like Cab Calloway, Pearl Bailey, and Sammy Davis, Jr. playing to segregated audiences in many towns.

“Every time I got a job in a show, they would say “she the girl who can dance on pointe” so I always had a solo part. I had, you know, feather coming off a skimpy costume, that was show style, but I was on pointe. So that’s why when I see those girls on pointe dressed like that I think ‘that’s me… then.’ So I want to send Pointe my picture dressed like that then, and ask them what’s different now? It’s not.”

Dixon-Gottschild asserts that it reflects ongoing systemic racism. All of the illusion of a post racial era after Obama became president,” she said. Gottschild said that Philadanco dancers are ballet trained a point that is missed in much of the perception and press coverage of the company over the years.

‘This year, my school is 55 years old and my company will be 45 years old. I started kids six, seven and eight, and after the first ten years, I sent my first students to New York or Pennsylvania Ballet and they bounced back to me saying ‘there is no work for us, they don‘t want us.” JB started her company because of that ongoing hardship for black dancers at the time hoping to change entrenched racism in ballet, modern and theatrical dance.

Those dancers stayed with me and then moved on the Ailey Company, the Dance Theater of Harlem. Here we are 45 years later moving on to top jobs out of Philadanco. I always told them if you are going to leave Danco move to something better.” and by that she means, for their specific career goals.

“I always say when people compare me to Ailey, I say why don’t you compare me to Paul Taylor, or Hubbard St. why do you always compare me with Ailey…well mainly because it’s predominantly African American, but I can’t talk about prejudice if I have an all – black company. I have to have a company that represents out culture, our city and I think that’s healthy. I have auditions next week and I’m sure that 40 percent of those dancers will not be black.”

“But mostly I’m looking for people who can do my work, I don’t want to be called a black company, I’m an American Company,” Brown said, spurring wide applause from the audience.

Diversity in dance is here, except when it’s not

Dixon-Gottschild elaborates, “JB has a vision that we all wish for. Dance is a measure of culture, a barometer of society. We are a microcosm. Race issues that still exist in America are going to exist in the dance world.”

Brown jumped in “I’m not beating up on Pennsylvania Ballet, but after 50 years, they just have one African American dancer. A month ago, there were auditions at ABT ( American Ballet Theater) and Arthur Mitchell called me up and said, make sure you send black kids to the auditions because they say they can’t find them. I say they don’t look. “

An audience member asked Brown what her assessment of the field was now “The opportunities to studies have opened, so that is something that I was always concerned about. I want them to have the opportunities the best teachers. I’d like the ballet to represent the city. We have a city that is 60 percent black, also the Latino community, the Asian community, should all be part of what we’re saying as a city as our ballet company.”

“Training has changed because of the colleges that have more programs, but as far as finding work… I’d like to find work for my company, that doesn’t always pigeonhole us as a black company,” she notes. Brown expresses her frustration at various venues that book ’Danco’ less frequently than predominantly white companies, because they are viewed as artistically limited. Brown is looking for equality in “training, work and exposure.” she said, adding, “we get more opportunities in Europe than we do here.”

Awards are nice, but….

Brown spoke jokingly about being awarded a 2012 National Medal of Arts by President Obama, “people keep asking me what was it like getting an award from Obama, and yes it was quite an honor. But, when I was there, I still wanted to ask him…ah, where‘s the check? You know we still don’t get any money from the city of Philadelphia, if it wasn’t for New York, there would be no Philadanco,” Brown reiterated.

No matter what the challenges, fiscal and otherwise Brown, at 82, has no plans to quit yet. She is making plans though to assure the continuation of Philadanco and her other organizations including the International Conference of Blacks in Dance which Brown founded in 1991. “My two daughters will continue the school. I’m looking to change the name of the school, that will be part of creating an international center for African American Dance,” Brown said.

Toward the end of the interview, an audience member, George Stephenson, who she recognized but hadn’t seen since he was a student in her school. “Aunt Joan you know where I come from. I just want to tell you thank you for those experiences. What the school taught me is that men can do these things as well, have confidence and things that affected areas of my whole life. Things I instill in my kids.” Brown seemed visibly moved by his statement. .

She was asked about men in dance and Brown spoke to there still being a cultural issue for straight men about wanting to dance. “A lot of times who come to me wanting to dance, but their dads want them to play football. But they come later. No matter what, I always have eight women and eight men.”

“Let me tell you, we’re still in the hood,” Brown assured.