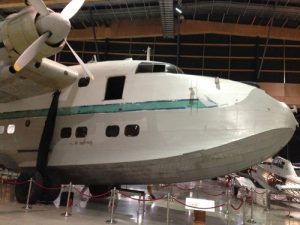 On January 2, 1938, American pilot Captain Edwin Musick embarked on a seemingly insurmountable journey. Pushing the limits of his aircraft and crew, he traversed 4,000 miles of open ocean, completing New Zealand’s first airmail delivery to Hawaii only to perish tragically on his dangerous voyage home. Captain Musick’s story provides the framework for a ballet that celebrates innovation while exploring themes such as the spirit of risk, sacrifice, and cross cultural exchange. Says Neenan, “Captain Musick was on a mission to deliver mail to an isolated region of the South Pacific during a time when mail was the only connection people had to their loved ones. His bravery in the face of such extreme danger, set against the magical backdrop of the South Pacific, are major inspirations for Rosie and me in the creation of this ballet.” 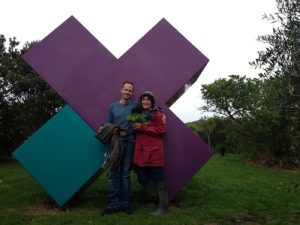 Neenan originally became captivated by Captain Musick’s story through conversations he had with his friend, composer and native New Zealander Rosie Langabeer. Preparations for Sunset, o639 Hours began in 2013 when he and Langabeer spent three weeks in the summer traveling throughout New Zealand gathering information on Captain Musick and researching Pacific and Maori culture. The duo made audio recordings of natural and urban sounds that would eventually be incorporated into the ballet’s score. They took photographs of the landscape to provide inspiration for award-winning Philadelphia artist and set designer Maiko Matsushima and New York City based costume designer Christine Darch. Neenan studied performances of traditional Maori dance to use as choreographic elements throughout the ballet, and even took vocal lessons to be able to participate as Langabeer created a sonic world for Sunset, o639 Hours that employs the dancers’ voices.

With Sunset, o639 Hours, Neenan and Langabeer will create for audiences the experience of being transported to a distant and isolated land as they follow a fictionalized account of Captain Musick’s final journey. The ballet begins the moment you step inside The Wilma Theater. Audiences will travel back in time and follow Captain Musick’s journey as it begins in the USA, continues on to New Zealand, Samoa and Hawaii, and ultimately ends in a world filled with the spirits from the tragic crash of the Samoan Clipper. A distinctive soundscape that combines traditional sounds from each of these lands with live recordings will fill the theater. To break down the traditional lines between the dancers onstage and the musicians in the pit, Rosie Langabeer and her ensemble of four musicians will play live on stage, interacting with the dancers who will also vocalize and sing. The dancers will embody characters central to the story, like the Captain himself and his aircraft, as well as majestic birds and other natural elements that are unique to the South Pacific. Celebrating risk and innovation, both in plot and through this unique collaboration, Sunset, o639 Hours promises to take audiences on an emotional and sensory journey unlike anything they have experienced before.

Sunset, o639 Hours marks the second time Neenan and Langabeer have collaborated on a project. In 2011, they worked together on Neenan’s first full-length world premiere for BalletX, Proliferation of the Imagination, a vaudeville ballet that was co-produced by The Wilma Theater.

Hailed by The New York Times as having “one of the most appealing and singular voices in ballet today,” Matthew Neenan co-founded BalletX with Christine Cox in 2005. In addition to his work with BalletX, Neenan is also the Resident Choreographer for Pennsylvania Ballet and is a highly sought after choreographer who has been commissioned to create work for The Washington Ballet, Colorado Ballet, Ballet Memphis, Milwaukee Ballet, Oregon Ballet Theatre, Tulsa Ballet, and Sacramento Ballet, among others. BalletX has toured and performed Neenan’s choreography in New York City at The Joyce Theater, Vail International Dance Festival, Jacob’s Pillow, Laguna Dance Festival, Spring to Dance Festival in St.Louis, and internationally in Cali, Colombia. His work has been praised in The New York Times, Financial Times, The Philadelphia Inquirer, Philadelphia Magazine, among others. BalletX’s 2013 performance of Matthew’s The Last Glass at The Joyce Theater in New York City was selected as a “Dance Favorite for 2013” by Alastair Macauley of The New York Times.

Collaborator Rosie Langabeer is an award-winning New Zealand-born composer and performer. She directs her own musical ensembles, which accompany a variety of genres including theatre, film, circus, and dance. She performs on a wide range of instruments including piano, accordion, synthesizer, voice, banjo and clarinet. Langabeer is currently based in Philadelphia, where she plays in numerous bands, is a member of No Face Performance Group, and works with Pig Iron Theatre Company. She has collaborated with Subcircle, The Wilma Theater, Bowerbird, and The Agave Opera Company. Langabeer has performed throughout New Zealand, as well as in New York, Philadelphia, and San Francisco. Sunset, o639 Hours marks her second collaboration with Matthew Neenan.

Summer Series 2014 will see the continuation of The X-Process, an audience enrichment initiative. During each Series in the 2013-14 Season, The X-Process features both an interactive lecture (A Pie, A Pint & The Process) and a Q&A event (Conversation with the Artists), both led by esteemed New York City based dance critic and author Elizabeth Zimmer. A Pie, A Pint & The Process for Summer Series 2014 will explore dance from the perspective of the choreographer. The X-Process is made possible through Engaging Dance Audiences administered by Dance/USA with generous funding from The Doris Duke Foundation.

For additional information and to purchase tickets please visit www.balletx.org.