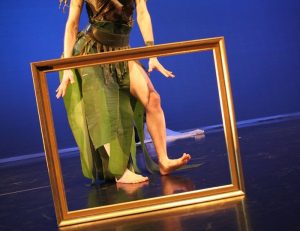 by Katie Moore for The Dance Journal

On Friday March 28th and Saturday March 29th, Temple University, MFA graduate student, Marion Ramirez will perform her thesis concert entitled “Musa Paradisaca” at the Conwell Dance Theater.  I was fortunate enough to meet-up with Marion to learn more about the forces at play behind her creative process.

Musa Paradisaca is the scientific term for the plantain, a fruit of one of the cultivated varieties similar to the banana.  Since Marion was a little girl, her mother would tell her she had “plantain feet” as a nickname for how her feet were misshapen. The nickname created imagery, which made her feel disconnected to this part of her body. When she began to have an interest in dance, she carried this association to her experience in technique classes. Due to the structure of her feet, she did not feel as though she fit the typical ballet dancer “line”, which is a significant element in the traditional style.

On the other hand, the plantain is honored as part of the culture of Puerto Rico, where Ramirez was born and raised. Marion explained that plantains in Puerto Rico are eaten three times a day, prepared in a variety of ways to create multiple flavors and dishes.  Being a predominant part of the Puerto Rican diet, the plantain also has social-political significance. Puerto Rico has a long history of being considered a “Banana Republic” , referring to a country whose economy is sustained mainly due to the export of this single resource.  This narrow economy results in a number of complicated cultural effects, which Ramirez then translates into complex movement throughout her work. These conflicting ideas, centered around a negative connection with a cultural staple, creates a lasting internal tension for Ramirez.

With age, Ramirez began to explore a variety of techniques and art forms including Flamenco, Theater, Modern, and Salsa. Eventually Ramirez discovered Contact Improvisation, which transformed her sense and understanding of dance. Taking contact improv classes facilitated a more profound connection to other people, which Ramirez favored. Instead of only using her feet on the ground with defined alignment, she could now use  her feet to explore and develop a more personal human experience. This approach also inspired some of the movement material in her current piece.

As a way to channel self-expression and to cope with competing ideas, Ramirez decided to create a myth, which is similar to her own story, but within a broader context. This framework was then linked to the political situation in Puerto Rico, focusing on issues of perpetual dependency. Ramirez’s struggle to find her distinct identity mirrors Puerto Rico’s effort to form a more coherent cultural identity. This is especially true given Puerto Rico’s history of colonialism and transition into an unincorporated territory of the United States.

Ramirez conducted further research and developed writings about the different ways we can relate body parts, similar to how she used her feet to symbolize a variety of meaning and cultural imagery. All of these social, cultural, political, and historical experiences and research are incorporated in to her upcoming thesis concert. However, Ramirez is illustrating these ideas in revolutionary ways. Her performance intertwines cooking, dancing, acting, and singing to create an interdisciplinary experience for the performers and audience members. Comedy is also an integral part of the concert to construct a lively and inviting atmosphere.

Another central foundation of the piece is collaboration with other artists. The performers are all professional dancers and a mature cast of the same age range as Ramirez. However, they all come from a variety of backgrounds, which is reflected in their interactions. As Ramirez started to develop her ideas about the music to be used,  she discovered the talents of Victor Garcia,  a graduate from Temple’s Boyer School of Music and Dance. Just as Ramierez’s work combines improvisation with set choreography, the scores by Garcia also create a mix of defined composition and improvisation.  Garcia’s Puerto Rican heritage led him to use musical elements common to his culture with roots in such genres as latin jazz.  The pianist, and many other contributors to the performance, are also of Latin American descent.  Merian Soto, an associate professor of dance at Temple University, has contributed significant guidance to Ramirez’s creative process. Soto has over the years created and performed numerous pieces centered around her own Puerto Rican heritage.