Filling the Performance Garage on a cold Sunday evening is no easy feat, especially when you’re an independent choreographer mounting your first production.  But Kareem B. Goodwin, a recent graduate of UArts, managed to do just that and more this past weekend in the hour-long, sold-out Moments.

Billed as “a visual look into the human perspective of time and how it is interpreted from person to person,” Moments featured ten works, all choreographed by Goodwin and set on dancers borrowed from Grace Dance Theater, Eleone Dance Theater and Ballet 180.  The majority of the program was performed to original compositions by Alonzo Hall and Omar-Frederick Pratt and the costumes—deep maroons, bright blues, iridescent silvers—did exactly what good costumes are meant to do: enhance but not distract. 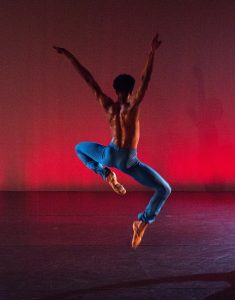 It’s hard to say what impressed me the most: Goodwin’s choreography (and the technical prowess of his dancers) or his friendly but professional demeanor as he welcomes the audience with genuine humility and gratitude.  He’s tall and lanky, with a warm smile, braces, and leopard print slippers but don’t let that fool you: there’s not an ounce of fluff in the evening’s program.

Who Are We… What Is This Moment? starts off with a bang: triple pirouettes into beautiful arabesques, strong diagonals, syncopated punches and a no-hands cartwheel ending in a lift.  Goodwin’s dancers are a fabulous, especially Taylor Jones, whose extensions make him look about ten feet tall, and Tunai Jones.  I could watch her for days and I wonder, to be honest, why she hasn’t been snatched up by one of the city’s more prominent companies.  She dances like a tiger stalking its prey: intense, elegant, powerful, with back hinges and leaps that start off heading in one direction and snap back the other way.

A duet performed by Tatiana Aiken and Jason Gonzalez-Collins hints at some interesting ideas for further development—the couple are almost oblivious to one another and intersect only occasionally—but it’s Growing into a Man… performed by Jah’meek David Williams that brings tears to my eyes.  It’s a piece about fatherhood, about hope, about breaking the cycle in which “boys like me [Williams] end up dead or in jail.”  There’s a lot going on: spoken word, a slide show, and the supremely talented Williams pitching backward into a perfect hinge before rolling up through his shoulders.  When he approaches the edge of the stage and lifts his new son from a seat in the front row, there isn’t a dry eye in the house.

A gutsy ensemble piece followed, Against the Hands of Time, which I wish had been longer. I liked the correlation between the understated, pedestrian choreography and the sound of a ticking clock; it provided a poignant contrast to the high energy, virtuosic intensity of the other works.  Also worth mentioning was the solo danced by Alexis DeFilippo, For We Walk By Faith, Not By Sight.  Here, Goodwin seemed to a take a risk.  The movements were smaller, more intimate, but nonetheless charged.  In a black blindfold, DeFilippo played with the music and with the audience, melting one moment and snapping to life the next.

My only complaint was that I wanted to see more— so many of the works ended before I was ready to see them go.  I’ll definitely be keeping my eye on Goodwin and can’t wait to see what the talented newcomer comes up with next.