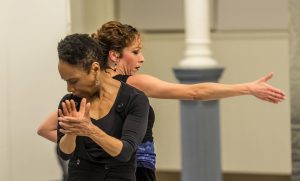 By Katie Moore for The Dance Journal

For the past two weeks, the 2014 Flamenco Festival has brought world renowned artists to Philadelphia, who are moving Flamenco in new directions, while  spreading awareness  about the many layers of complexity, strength, and beauty in their art form.

One of the forces in this modern investigation of Flamenco has been Rosario Toledo, who traveled to Philadelphia for a month-long residency with three very diverse and talented artists: Germaine Ingram, Eun Jung Choi, and Meg Foley. The outcome of this collaboration was a performance series titled “Tapas.” The fusion of cultures between Rosario and each artist resulted in three unique performances. Each residency artist had one night dedicated to her experience. After each thirty minute performance, a discussion session was led by residency/consultant writer, Brenda Dixon-Gottschild.  While the performances were short, they were full of flavor, evincing the significance of the title.

I had the opportunity to view the performance featuring Germaine Ingram. The piece was performed in Drexel University’s dance studio on the 4th floor of the main building on Chestnut Street. With only a few rows of seating available,  the space was set up proscenium style with the stage floor raised only an inch off of the carpet, creating a most intimate environment. This much anticipated performance resulted in a sold out show with only standing room tickets remaining. On stage were four display boards on wheels which allowed the dancers to walk onto the stage without being seen. At stage left there was a chair with two microphones for the guitarist, who offered live accompaniment during the majority of the performance.

The evening commenced when Germaine Ingram was revealed from behind the two moving scrims. She began to sing soft but resonant notes, while gradually turning to face the audience. Her sequences of vocalization combined with improvised movement, evoked qualities of African vernacular dance and jazz.  Ingram’s solo soon became interrupted by Rosario and the guitarist stomping their feet and clapping their hands to a Flamenco rhythm, from off stage. Ingram, acting slightly startled, continued to develop her song and moved towards the microphone. As the guitarist emerged and took his place on stage, Ingram blended scatting with English lyrics, revealing her diverse background in blues, soul, and jazz music. With the conclusion of her song, Rosario appeared on stage, offering up a captivating duet full of powerful feminine energy. Germaine and Rosario were contemplative before beginning their movement, absorbing the music of the guitar and the physical instruments they employed through vocalization and body percussion. This contemplative state emphasized the meaning and intent behind the piece –  how to communicate and express your ideas to someone of a different culture.

Gestures, such as reaching upwards towards the ceiling with desire and clear facial expressions, further illustrated the theme of finding understanding through the universal language that is music and dance. Mirroring each other’s movement and echoing the sound made by their feet emphasized the need for comprehension. Ingram’s solo was influenced by jazz and tap styles, where the arms are relaxed and develop sequentially, while the body is low to the floor to provide easy shifts of weight for syncopation and improvisation. By contrast, Rosario’s solo was full of intricate foot movement that always stayed underneath her pelvis, with her body upright and her arms and hips swiftly changing into dynamic positions. When the two came together, a common ground was found, where each dancer never imitated, but interpreted their partner’s technique through their own movement vocabulary. Full of silent pauses and changes in movement quality, the piece revealed the inner struggle and effort of connecting with someone who is similar, yet so different.  The performance ended with Ingram and Toledo walking through the two boards as the stage was darkened. The boards seemed to symbolize a doorway, and the action of walking through this doorway into the darkness, indicated the pathway towards understanding. The exchange of cultural information and ideas is a never-ending journey that continues to develop and evolve.

When the performance ended and the discussion began, concepts reflected upon by those in attendance were the influence of heritage, the channels of expression and the different sense of rhythm that characterizes Flamenco dance and jazz tap. Toledo and Ingram described how they work often with improvisation, yet their performance seemed so focused and similar. This further demonstrated the impact of collaboration on movement choices. The discourse not only provided insight in to the foundation the piece, but was also gave an opportunity for audience members to voice how the performance translated for them. The interaction and feedback transformed the traditional performance structure, allowing the artists and the observers to create a deeper attachment to the shared experience.