Afternoon Of A Faun: Tanaquil Le Clercq Comes To The Ritz 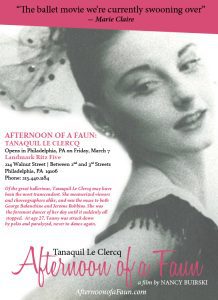 The release of the documentary film AFTERNOON OF A FAUN: TANAQUIL LE CLERCQ, about the legendary New York City Ballet dancer and muse to George Balanchine and Jerome Robbins, will occur on Friday, March 7th at the Landmark Ritz Five in Philadelphia.

Of all the great ballerinas, Tanaquil Le Clercq may have been the most transcendent. With a body unlike any before hers, she mesmerized viewers and choreographers alike. With her elongated, race-horse physique, she became the new prototype for the great George Balanchine.

Because of her extraordinary movement and unique personality on stage, she became a muse to two of the greatest choreographers in dance, George Balanchine and Jerome Robbins. She eventually married Balanchine and Robbins created his famous version of Afternoon of a Faun for her.

She had love, fame, adoration, and was the foremost dancer of her day until it suddenly all stopped. At the age of 27, she was struck down by polio and paralyzed. She never danced again. The ballet world has been haunted by her story ever since.

AFTERNOON OF A FAUN illuminates the exceptional qualities of Tanny in life and in dance. It portrays her artistic triumph and her personal tragedy. Through her own words and through the people who knew and loved her, the film captures her love of dance, her unique personality full of humor, candor and passion, and her position as the inspiration and love of arguably the two leading 20th century choreographers working in America.

The subject of artist and muse has fascinated Director Nancy Buirski since her own days as a painter and later a photographer. “The poignancy of this ephemeral relationship enchants me; indeed an early inspiration for this documentary was the 1944 film Portrait of Jenny, a film whose score directly influenced my own. The Debussy music in the 1944 David O’ Selznick film, especially the piece Afternoon of a Faun, captured the haunting, romantic and elusive relationship between the painter, played by Joseph Cotton, and his young muse, played by Jennifer Jones. The first time I saw footage of Tanaquil Le Clercq dancing was in Robbins’ haunting ballet set to the same music; the mystical, eroticism of that music underscoring her dance impressed me as it had in the 1946 film. Even as a child I’d felt the pain of the artist as he yearns for the muse he cannot have; the same quality seems ever present in the men who appear to want to possess Tanny. Jacques D’Amboise tells us that Balanchine needed the unattainable; it is painfully ironic that even as Balanchine ultimately “processes” Tanny as his wife, her role as his inspiration will become elusive.

The possibility of treating Tanny’s intensely dramatic story as poetry was highly attractive to me as the painter as well as the filmmaker. A ballet dancer tries to ascend weightlessly into air, only to be brought back by the earth’s gravitational pull. It is the poetry of dance itself, and what could be more symbolic of the art form than a transcendental dancer pulled back to earth forever. It is what all dancers fear and face as they age out of their professions – so much sooner than most. It is a form of death greeting them prematurely. Balanchine created La Valse for Tanaquil Le Clercq – death comes to her, it embraces her and she falls to the ground, dead. It was the metaphor of dance as he had come to know it. Our film has tried to capture this poetry in mood, music and stirring dance.” 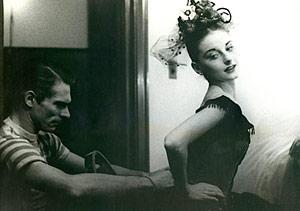 Tanaquil Le Clercq
Born in Paris in 1929, Tanaquil was the daughter of a French intellectual and a society matron from St. Louis. When Tanny was 3, they moved to New York where Jacques Le Clercq taught romance languages. Tanny began ballet training in New York at age 5, studying with Mikhail Mordkin. She eventually transitioned to the School of American Ballet, which George Balanchine had founded in 1934. Balanchine discovered Tanny as a student there, and at the tender age of 15, he cast her as Choleric in The Four Temperaments along with the great prima ballerinas in his company, then called Ballet Society. Before long she was dancing solo roles as a member of Ballet Society, never having danced in the corps de ballet. Some of Balanchine’s most memorable ballets were choreographed on Tanny; notably Symphony in C, La Valse, Concerto Barocco and Western Symphony. She was the original Dew Drop in The Nutcracker.

Jerome Robbins was also fascinated with Tanny; famously attributing his enchantment with her unique style of dancing with his decision to join the New York City Ballet and work under Balanchine as both a dancer and choreographer. It was there he created his radical version of Afternoon of a Faun on Tanny. His fascination with Tanny intensified, and the emerging theater and ballet choreographer was heartbroken when she decided to marry George Balanchine in 1952.

The 50s was a notable time in the culture of New York City.  Creative voices were flocking to the city following the end of the war and audiences were seeking out new art forms. But it was also a time fraught by a polio epidemic impacting young and old. Communities were gripped by real and imagined fears as the disease floated over cities, town and country like a cloud. No one was immune, not even the supremely gifted.

In the fall of 1956, The New York City Ballet travelled to Europe on tour. In preparation, dancers were inoculated with the Salk vaccine, which had proven successful in historic trials on children just years before. Sadly, Tanny chose not to take the shot. During the company’s stay on Copenhagen, Tanny collapsed. She was rushed to the hospital and placed in an iron lung, not expected to live. She’d been stricken with polio and severely paralyzed. She would never walk or dance again.

Tanny spent six months in a Danish Hospital renowned for its work on Infantile Paralysis. Balanchine took a leave from New York City Ballet to help with her treatment, and Robbins wrote her passionate letters. Six months later, Tanny was moved to Warm Springs, GA to the country’s pre-imminent treatment center. George Balanchine continued to nurse her, creating movements to help her regain control of her muscles. Jerome Robbins visited her and took the most enduring photographs of her to date.

But eventually, both men had to accept what Tanny already knew. She would never dance again.  And she would never inspire them. George Balanchine divorced Tanny in 1969.  Jerome Robbins went on to work on stage and in film.

Tanny bravely survived on her own until she died at age 71. During that time she taught at Arthur Mitchell’s Dance Theatre of Harlem, though she primarily lived a private life attending the ballet on occasion. Although Tanny’s career was cut short, she will always be remembered in the ballets that were created for her – Western Symphony, La Valse, Metamorphosis, and the eponymous Afternoon of a Faun.

Her life after dance is the story of universal hope and of a strong woman emboldened by inner strength and love of life. Dancers learn to live in the moment; they know their careers will not last long. Tanny’s resiliency is a product of her life as a dancer and the enduring power of the human spirit.

0 replies on “Afternoon Of A Faun: Tanaquil Le Clercq Comes To The Ritz”

PrevPreviousCan you get them to stop [email protected]#(* moving!
NextFall Dance Film Line Up at The Bryn Mawr Film Institute features the Bolshoi BalletNext 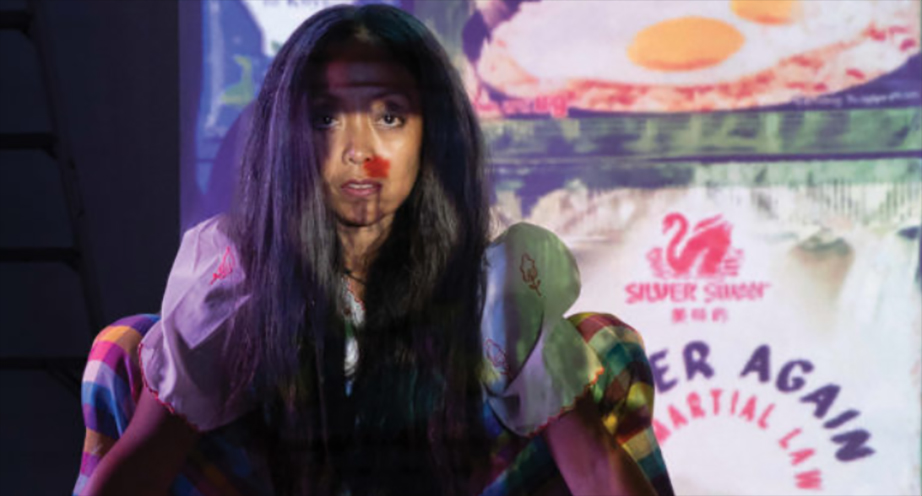 Made by the hands of community members, Paroles litter the front window of Painted Bride’s new location in West Philadelphia. These colorful, star-shaped lanterns, traditionally 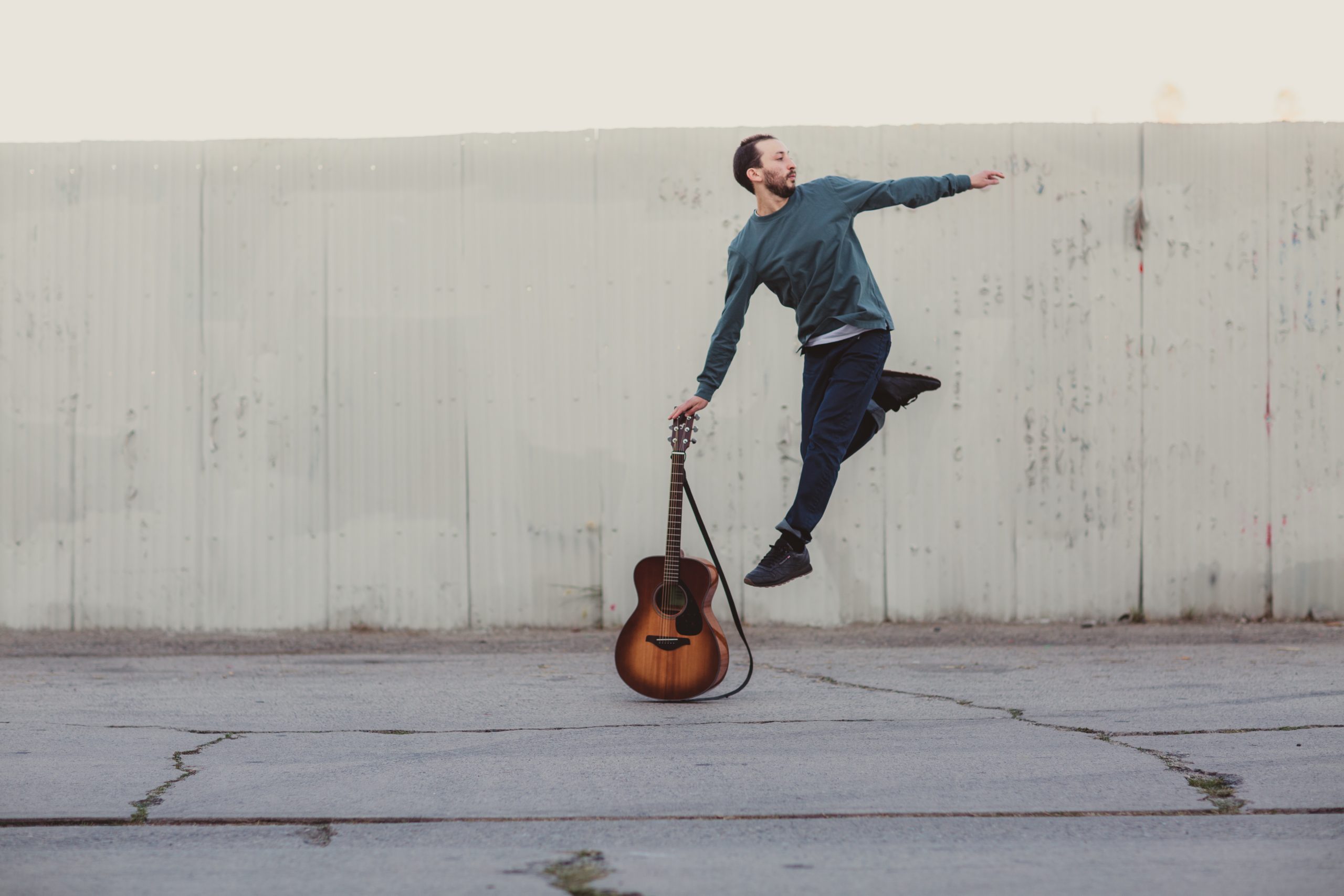 MOTION SICKNESS adds a unique brand of improvisation to Miniball Festival at Christ Church Neighborhood House in Old City. Miniball is a micro-version of Cannonball