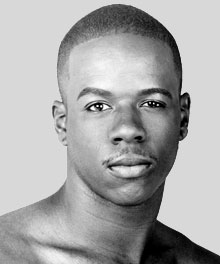 Escaping the winter blues with tour stops in Los Angeles earlier this month touring the James Brown Project, Philadanco’s dancers were back at their home studios in Philly last weekend, rehearsing upcoming performances for their spring series here and an ensemble of five women preparing for a ballet to be performed in Verizon Hall onstage with the Philadelphia Orchestra this weekend.

Artistic director Joan Myers Brown was moving from studio to studio, interacting with young dance students in her school just finishing up class. Brown was also, she admitted, fielding calls to correct some press misinformation about the Kimmel performance. Brown said that despite advertisements claiming otherwise, the company will not be dancing to ballet music from Stravinsky’s Firebird and Prokofiev’s Cinderella, even though they are being played in the concert. What ‘Danco will be dancing the premiere of composer Francis Poulenc’s Aubade, newly choreographed by company member Tommie-Waheed Evans.

In the upper studio, Evans was in fact putting the finishing touches on his ballet with only days to go before they would be rehearsing with the orchestra. ‘Danco audiences may know Evans more as a dancer, but he has been an emerging choreographer here and in New York, who has created several ballets for Eleone Dance, Grace Dance Theater, Complexions Dance and Waheed Works, his own fledgling company.

Even though the’ run-through looked was cohesive and detailed, he was still tinkering with changes in the end section. He admitted that choreographing the piece was quick, not only because of his dance schedule but because he found the music challenging. Poulenc’s score for Aubade is for 18 instruments and is  dynamic mix of lyricism and with a driving piano concerto structure at its center. The orchestral describes the story from Greek mythology about Diana, the huntress goddess, living in the woods with other women, protecting each other. In the myth, their idyll is disturbed by the hunter Acteon, a character Poulenc specifically left out of his interpretation of the ballet.

Poulenc was one of the famed Les Six composers and had a singular reputation as an out gay composers of the era. George Balanchine, who was choreographing his Aubade for Diaghilev’s Ballets Russes, went against Poulenc’s wishes and returned male character to his ballet.

Evans found all of that history fascinating and useful but he found Poulenc‘s time signatures and “rhythms complicated and at first, I was a little chaotic,” he said. “But this was a good challenge, because choreographically, before walking into a studio, it’s always good to figure out the music. I have to thank JB for this opportunity, because through this experience I literally listen to music differently. I had to find the true meaning that the composer set out to have. Poulenc never wanted a male dancer to be in this, but Balanchine used a male dancer and Poulenc was highly offended.”

The Philadelphia Orchestra and Stephane Denéve, conductor for the concerts, also requested that the choreography stick to Poulenc’s original concept that Aubade be danced by all women and that there be a solo section for Diana.

“Of course, the situation here is so unique for me because this is my home and it’s like me and my sisters just helping me with my project. That has been a great thing.”  Diane will be played by Roxanne Lyst and the ensemble- Janine N. Beckles, Courtney Robinson, Jennifer Jones and Lauren Putty White. Evans said he finally started to unlock the deeper themes of the music to inspire his choreography. “I had the base of it, then I was comfortable with it being more abstract.” and “I’m interested in the feeling of solitude in the story.  These characters are all fighting with loneliness, togetherness and passion.”

Frequent Philadanco’s costumer Anna-Alisa Belous designed sleek sheer form fitting sheer dance dresses evoke sylvan fantasy. The lighting design will have a specific designs the theatricality for the dancers and the musicians. “My style, is… well for this I’m trying not to be aggressive, trying to keep it lighter.

Without JB’s advise and the requests of the orchestra, Evans said he would have choreographed it differently, with a lot of partnering. “I have just been so open with this whole project. I used to dance with a company with live jazz music in Los Angeles, so I know that unique energy…. is amazing and rare. But I’ve never danced with classical orchestra. I think that is going to be an amazing experience.”

Evans has been coping with the possible onset of a stress injury he has been enjoying one of his best dance seasons. He danced all season, including the Los Angeles engagement of the James Brown Project, since that is his home town.  He’s continuing to strike a balance between performing and stepping up choreographing

“JB is helping me to find a balance with that. Whether I want to or not. And showing me how to merge both. Yes, I’ve been in excruciation pain. Especially last December, I was hanging on somehow and it took JB to say, ’ok you need to get this checked out, we need to figure this out all together,” he said. “And stay on top of any injury. I just meant so much that she wants me to continue to dance and be a choreographer.

Brown concurs that Evans is “at his peak performing wise. I know he wasn’t feeling great on tour. But with his professionalism, he worked it.  This is something totally different for him and I’m enjoying seeing him develop. I think he’s feeling the pressure. But this ballet looks good. I gave him a little advise about pulling back on some things because this will not be primarily a dance audience, but an orchestra audience,“ Brown confided.  “ I was delighted to give Tommie this opportunity because I am interested in the obvious growth in his work,” Brown observed.