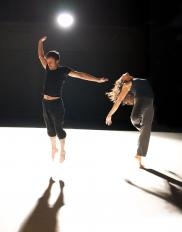 Hailed by The Philadelphia Inquirer for her “severely focused intellectual beauty” in performance, Gibson has partnered once more with critically acclaimed lighting designer Clifford Greer for her newest work, Temporal Objects. “This piece has grown out of my interest in fugue analysis and my collaboration with Clifford to integrate lighting and choreography as equal voices in the work,” says Gibson. “As this piece developed and as the manipulation of light and movement patterns began to resemble instances of recollection in the mind, we continued to explore how memories themselves are replayed and re-patterned. Elements from distant points in time: the baroque, romantic era, and the present were invited into the same moment as objects co-existing in the conscious.” Temporal Objects will feature Gibson alongside company dancers Erin Gallagher, Melissa McCarten, Meredith Stapleton and Jessica Warchal-King, performing to the music of Ludwig van Beethoven.

Gibson will share the stage with the energy-packed and highly physical dance of John Scott and the Irish Modern Dance Theatre of Dublin, Ireland. Choreographed by Scott with music by the US duo BLACKFISH and lighting by Eric Würtz, the Philadelphia premiere of Body Duet features two exceptional and witty performers: New York’s “Bessie” award winning Michelle Boulé and Philip Connaughton, one of Ireland’s outstanding male dancers. The piece depicts one person, danced by a male and female dancer attempting to create one body, using breath to generate movement. Playful, virtuosic and passionate, Scott’s work celebrates the ecstatic feeling of being together, of losing fear and inhibition, and trusting in being together.

On Saturday, March 1, John Scott, Michelle Boulé and Philip Connaughton will lead a workshop open to the public that will engage them in the exciting, amusing and sometimes surreal creative processes Scott employs in the creation of his work. Dancers and non-dancers alike are encouraged to participate.

Temporal Objects and Body Duet are performed on a shared program Thursday, February 27 through Saturday, March 1 at 7:30 p.m. at the Performance Garage, 1515 Brandywine Street. Tickets are $15-20 and can be purchased at http://danceboxoffice.com/. The open workshop on Saturday, March 1 takes place from 1-3 p.m. at the Performance Garage. Admission is $10-15 . For more information, please visit PhilaDanceProjects.org or call 215-387-9895.

Nora Gibson, Director of the Nora Gibson Performance Project, is a Philadelphia based dancer and choreographer, whose training spans classical ballet to postmodern dance and improvisation. Gibson trained with Sylvester Campbell at Baltimore School for the Arts, and through ballet residencies at Chautauqua and NCSA. She later graduated with a BFA from Tisch, at NYU, where she had the opportunity to perform in the works of Elisa Monte and Mark Morris. Nora studied improvisational forms with Daniel Lepkoff, Nancy StarkSmith, and KJ Holmes. Nora has had the privilege of dancing for the Ellicott City Ballet, PATH Dance Company, Andrew Marcus, ClancyWorks Dance, and Jeffrey Gunshol. Nora was selected to perform in the reconstruction of 1970s works by Lucinda Childs, under the direction of Childs and Ty Boomershine, and has performed this work over the last three years. Last summer, Nora was awarded an artistic residency in Poland. Nora has performed her own work throughout Philadelphia and in NYC at various downtown venues such as P.S. 122, St. Marks Church, and DIA Center for the Arts. In 2009, she established Nora Gibson Performance Project, with Philadelphia as its home base. Since that time, her work has consistently received recognition. Gibson was awarded a 2009-10 Artist in Residence with the nEW Festival in Philadelphia, the CEC New Edge Residency for 2009-10, and the Ellen Forman Memorial Award in 2011. Her work has been commissioned by Drexel University and Bryn Mawr College. Gibson’s choreography has begun touring, and was presented by New Dance Alliance at Joyce SOHO, and co-presented by Dance Place in D.C.

The IMDT is a culturally diverse modern/post-modern inspired dance company based in Dublin and under the direction of Founder/Artistic Director/Choreographer John Scott. The Company engages dancers of different backgrounds, ages and body types from Ireland, Europe, Africa and USA. Scott pioneers innovative dance expression and promotes dialogue with international dance practitioners and audiences to achieve this.

Philadelphia Dance Projects (PDP) supports contemporary dance through Projects that encourage artists and audiences to more fully participate and engage in the experience and pursuit of dance as an evolving form. Since its inception in 1993, under the aegis of Jacob’s Pillow Dance Festival, Philadelphia Dance Projects has engaged stellar dance artists many of whom were enlarging the modern and postmodern vocabularies with personal and/or cultural explorations in both technique and content. PDP achieves its mission by presenting performances, workshops, classes, a dance-film fest, dialogs and forums for a broad-based audience including artists, aspiring artists, students and the general public. In 2009 PDP launched Philadelphia Dance Projects Presents DANCE UP CLOSE a full presenting series highlighting national and local contemporary dance artists. The successful series is introducing new artists to Philly and premiering work by some of Philadelphia’s finest contemporary dance artists.