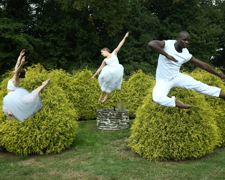 By Roger Lee for The Dance Journal
photo by Bill Hebert

The international-touring SHARP Dance Company is performing at home this weekend in Philadelphia. The company is presenting their fall concert series Perceptions at Christ Church Neighborhood House. In the midst of a busy tech week, Founding Artistic Director Diane Sharp-Nachsin found time to catch up with The Dance Journal to discuss this weekend’s shows.

The idea for Perceptions came when Sharp-Nachsin attended an audience engagement seminar at the Dance/USA conference in San Francisco this past June. It was during the seminar that a light bulb went off:  “What is SHARP made the audience an actual part of their next concert series?” As a result, SHARP made the Philadelphia community a part of the artistic creation process for their upcoming fall shows.

“We asked the community to send us letters about someone that changed their perceptions of life.” What the company got in return were a lot of thought-provoking letters to pick from. Sharp-Nachsin spent the summer in Otranto, Italy as a BAU Institute Fellow where she read and selected letters from the community to influence her new work. “I used my time in Italy to pick from the letters sent, design ideas for each piece, and even choose the music. It was a great time for creative exploration,” explained Sharp-Nachsin.

According to Sharp-Nachsin, “People touch our lives in many ways, some positive and some negative. Their spirit leads us to make certain decisions in our life, what we want to be and who we want to be. These people change our “perceptions” of the world and how we see it.” This was her premise for Perceptions. Sharp-Nachsin explained that as the letters poured in, the original music of composer Jason Andrew was developed, and new choreography was set, Perceptions came to life. ““Perceptions” hopes to submerse its audience into these letters and how they changed the view of the writer and the world around them,” she added.

Perceptions is the newest release from the 8-year-old SHARP Dance Company. Since day one, SHARP has been dedicated to telling stories, putting “meaning behind movement”, and creating a memorable experience for audiences.  The company has also been dedicated to building a warm, family atmosphere for its members and collaborators. Sharp-Nachsin’s favorite memory with the company was during one of the annual holiday parties. “When stepping outside for a moment I looked back into the room and through the window I saw 8 dancers one with her newborn child and all of their partners. They were all laughing and talking together,” she reminisced. “It made me so happy to see that SHARP brought these great people together and gave them the opportunity to dance, tour and bond together in the “crazy family” that is SHARP.”

In just 8 years, SHARP has grown in its number of dancers and artistic collaborators, toured nationally and internationally, and secured its own rehearsal space.

“After renting rehearsal space for several years, SHARP needed a more flexible rehearsal schedule and space of our own. We started with “The Box” in Olde Kensington partnered with photographer Kylene Cleaver and started “The Box” in Olde Kensington. It served as a collaborative space for rehearsals, photo shoots, and rehearsals,” said Sharp-Nachsin. “After Kylene decided to move her business to the suburbs, SHARP’s board president purchased a home and built a rehearsal space in South Philadelphia for SHARP to now call home.” With a new rehearsal space, SHARP has been hard at work preparing for the premiere of Perceptions on an unusually tight deadline. Sharp-Nachsin explained,”With our April PIFA performance and my July Italy residency, the company was left with less than 4 months to prepare Perceptions.” SHARP has increased their rehearsal schedules to compensate for the limited time frame.