perceiving the ‘just this’-ness reflects on the unique movement potential of the individual and embraces life’s daily routines. In Rethorst’s words from her essay Dailiness, the work is about “finding each moment, holding the moment until it is perceived, keeping the accumulation of moments until something is happening, something starts to kick in — the dance begins to squeak a little interest at you.” 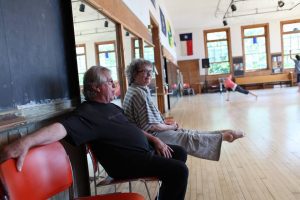 The piece is the culmination of Susan Rethorst: Moving in Philadelphia, Rethorst’s yearlong residency in the city that included open workshops, special events and new works meant to bring the scope of her artistry to the Philadelphia community. As part of this residency, an Informance will be held on Thursday, December 5 for the public to observe selections of the work in progress and hear a panel discussion featuring Rethorst, Fischbeck, Danspace Project Executive Director Judy Hussie-Taylor, choreographer Vicki Shick and <fidget> co-director  Megan Bridge, with DanceUP Executive Director Lois Welk as moderator. Rethorst will be signing copies of her book A Choreographic Mind after the event.

“I find work with a group of dancers unknown to me to be a particularly interesting challenge,” says Rethorst of her Philadelphia residency. “I am required to develop new strategies to work with dancers who may have a different background/set of goals/expectations from my own. This demands new awareness of what I want and what I take for granted in subtle ways. Daily-ness is embraced over magic and spectacle, informed by a profound acceptance of the body and its knowledge.”

Adds Terry Fox, executive director of Philadelphia Dance Projects (PDP): “Rethorst reminds us that all the various and simple ways we move can be viewed as dance or a dance.  And that this is worth contemplation philosophically.”

Informance for perceiving the “just this”-ness, including preview and book signing, will be held on Thursday, December 5 at 7 p.m. at the Performance Garage, 1515 Brandywine Street. Tickets are $5-10. Performances are Thursday, January 16 through Saturday, January 18 at 8 p.m. and Sunday, January 19 at 3 p.m. at the Arts Bank, 601 S. Broad St. in Philadelphia. Tickets are $25 and can be purchased online at DanceBoxOffice.com. For more information, please visit PhilaDanceProjects.org or call 215-387-9895.

ABOUT SUSAN RETHORST
Rethorst began her study of modern dance at an early age under Erika Thimey, a contemporary of Mary Wigman. She then studied with Judith Dunn at Bennington College, laying the groundwork for her artistic sensibility. Rethorst has been creating dances out of New York City since 1975 and teaching choreography while creating work throughout Europe, Scandinavia, and the U.S. since 1995. She has lectured at Dartington College in the U.K., Arizona State University, New York University, and the Amsterdam School of the Arts.

Rethorst was among the first to receive a New York Dance and Performance Award (‘Bessie’) for Outstanding Achievement in 1985. In further recognition of her choreographic achievements, she has been the recipient of many grants from the National Endowment for the Arts (1979-1989, 1992-1995), as well as support from the Creative Artist’s Public Service Program (1979), the New York State Council on the Arts (1979-1983), the Foundation for Contemporary Performance (1988 and 2003), the New York Foundation for the Arts (1989,1993), the Ernie Pagnano Memorial Fund (1991), the Joyce Mertz Gilmore Foundation (1992), and a fellowship from the John Simon Guggenheim Memorial Foundation (1999). In 2008, Rethorst received her second Bessie for 208 East Broadway: Suitcase Dreams and in 2010 she received the prestigious Alpert Award.

In 2005, Rethorst started a summer program devoted to the study of choreography in Pennsylvania co-sponsored by Wilson College: Studio Upson in Pennsylvania (SUPA). A mid-career retrospective of her work, Susan Rethorst: Retro(intro)spective, was presented at Danspace in 2011, and her book A Choreographic Mind: Autobodygraphical Writings was published by the Theater Academy of Helsinki in April of 2012.

ABOUT GROUP MOTION
Group Motion Multi Media Dance Theater is one of Philadelphia’s longest running contemporary dance organizations supporting a locally, nationally and internationally respected dance company. The company was founded in 1968 by Brigitta Herrmann, Helmut Gottschild and Manfred Fischbeck. Under the sole artistic direction of Manfred Fischbeck since 1989, the company has created a substantial body of over 50 works and continues to perform nationally and abroad. Group Motion also has a long history of collaboration with prominent national and international artists in all fields, including choreographers Carol Brown (New Zealand), Kenshi Nohmi and Akiko Kitamura (Japan), Oscar Araiz (Argentina), Wally Cardona (New York), Rennie Harris (Philadelphia), composers Phil Kline (New York), Andrea Clearfield (Philadelphia), and visual artists Peter Rose (Philadelphia) and Quintan Ana Wikswo (New York). In the creation of the company’s own work, Manfred Fischbeck works in close collaboration with the dancers who are also choreographers in their own right. www.groupmotion.org

ABOUT PHILADELPHIA DANCE PROJECTS
Philadelphia Dance Projects (PDP) supports contemporary dance through Projects that encourage artists and audiences to more fully participate and engage in the experience and pursuit of dance as an evolving form. Since its inception in 1993, under the aegis of Jacob’s Pillow Dance Festival, Philadelphia Dance Projects has engaged stellar dance artists many of whom were enlarging the modern and postmodern vocabularies with personal and/or cultural explorations in both technique and content. PDP achieves its mission by presenting performances, workshops, classes, a dance-film fest, dialogs and forums for a broad-based audience including artists, aspiring artists, students and the general public. In 2009 PDP launched Philadelphia Dance Projects Presents DANCE UP CLOSE a full presenting series highlighting national and local contemporary dance artists. The successful series is introducing new artists to Philly and premiering work by some of Philadelphia’s finest contemporary dance artists. www.philadanceprojects.org