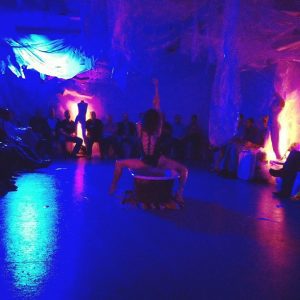 Audiences like thrills and with its graphic poster art promising violence and nudity, Gunnar Montana’s BASEMENT is a guaranteed FringeArts hit. In an upper room at the Asian Arts Initiative there is horror movie glee among this audience seated around the perimeter of the room as heavy metal music thrashes through, this is instantly creepy with its shredded plastic and bloody dummy body parts dangling above. Montana stalks through, with a murderous glare, bolting the door and costumed which include creepy butcher garb and leather accessories that need a safe word quick.  The premise of the show is a theatrical representation of the irrational and violent feelings the choreographer had when his boyfriend split.

There is no boyfriend around, instead Stephi Lyneice,Shelby Lynn Joyce and Jennifer Jones, are the objects of Montana’s cathartic rage. There is some resistance watching this, because he seems to have women trapped and these scenarios are all to real in the world. When Montana starts to move the a free standing bathtub around, the hairs start to stand up, when dummy heads start to roll, there is laughter.

Montana manhandles the ladies and flings them about that goes right to the edge of disturbing realism, but he reins it in, sometimes with sardonic humor. He pulls Joyce with a chain link around the waist, but then  they execute a tumbling pas de deux suggests this is consensual play. One cringing moment comes when Jones ends up in the bathtub passed out and has what looks like gas poured on her, but then she slinks in and on the tub in a dazzlingly acrobatic flash-dance. At one point clutching the bass in a headstand with legs fully extended.  Lyneice enters in bra and panties, wielding a frying pan in a prancey dance set to Nat King Cole’s L O V E and at key moments smashes severed dummy heads with the pan and punts them to the audience.

Montana comes in dragging a ratty life-size Santa Claus doll and his ex-boyfriend is heard in a phone message when he checks in with him after they have broken up.  Montana himself is just wearing a dance belt and a Santa top and he proceed to eviscerate the Santa doll while slinking around. He wraps a boa around him (lets just say its not made of feathers) lip-syncing to Brenda Lee’s torch song ‘I’m Sorry’  The finale has everyone tumbling amok over a torn up mattress. Lyneice enters in a desiccated Antoinette gown in a pig head mask and strips (ala Gypsy demure) and walks over then and unbolts the door in a calm escape. During the standing ovation the troupe got, a beaming, Montana, covered in stage blood, appears to be so over the axed ex.

And at the other end of the dance spectrum~

Leah Stein‘s Adjacent Spaces is an elegiac chamber dance that interacts with the incredible rooms at Shiloh Baptist Church at 21st and Christian Street. In fact, there is so much atmosphere of communities coming together here with a 150 years of history, that it is hard to articulate the interactive effect Stein essays. One of the reasons she wanted to use the space is because it is both active as a church and living center, but also in constant disrepair.

The first section is a solo danced by Stein in the second floor chapel, with a wood pipe organ and dismantled circular pews, risers and piles of discarded supplies. Stein moves about the room, connecting her body with objects as violinist Diane Monroe follows her.  Stein, who can drop out of sight among the detritus, or just become part of it. Stein’s fragmented movement phrasing breaks out into free dance to Monroe’s wending string line. This has an immediacy and improvisational dynamics that keeps evolving into a music-dance dialogue. For such high ceilings, the room has warm natural acoustics that don’t evaporate or bounce the rich textures of Monroe‘s violin.

Stein’s tentative, fragmented movement phrasing breaks out into free dance to Monroe’s roving string line.  The improv stream of choreographic and musical dynamic of time and space is a liberated dialogue.  They float out and we are then are led to the upper room- one corner a boxy enclave with brilliant southern light streaming in, and the other an attic expanse under high angled skylight and eaves. Cunningham’s sonorous viola coming in from another room.

David Konyk and Gabrielle Revlock are in one section of the room, executing acrobatic moves on and under a large dark wood. At various points they freeze their positions for several moments. Konyk vaults onto one edge in a locked handstand his head on positioned off the edge. Revlock flings herself between the table and wall in an instant. They lift each other in various slo-motion phrases and limb interlocks.  Meanwhile, in the other section of the room, Germaine Ingram and Michelle Tantoco are tuning into the percussive messages and energy of an ancient looking heavy wood table. Ingram runs her fingers over the wood grains, taps out signals then taps out phrases on the floor. Their combined vocalizations are alternately dissonant, high pitch, then basso frequencies. Tantoco dances with two metal lamp shades in ritualistic Asian expressionism.

Because we are looking back and forth, the accumulated images play dramatically off the natural light changing as it streams through the windows, seemingly on cue. The finale takes place in the first room, with Stein and the musicians joining the rest of the troupe. They dances as they move the curved pews in haphazardly in place and then they pull audience members to fill them. Adjacent Spaces spiritual energy and renewal. For Stein it is metaphysically serene, vital work that enriches the senses, if not the soul.