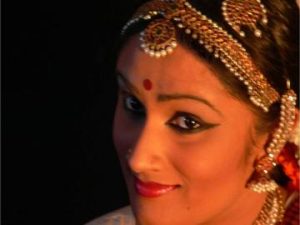 Although most folks equate classical Indian dance with Bollywood, local Bharathanaatyam dancer Anita Ranjani is working to set the record straight.  Her company, Naatya Seva, will present Shringara Rasa, The Emotion of Love in this year’s Fringe Arts Festival.

The 27-year old Springfield native graduated from Cabrini College.  She works in merchandizing but has been teaching dance since she was in high school.  Having performed in concerts organized by her teacher as a child, including works produced for the Fringe, she is excited to give her students the same opportunity.

When asked to describe the art form to those who are unfamiliar with south Indian classical dance, she explains that Bharathanaatyam is characterized by storytelling, intricate footwork, bright costumes and traditional music that is, in her opinion, “hopefully very enhancing.”

“Pure dance is probably very different from what people have seen,” she says.  “If you say Indian dance, or Indian classical dance, people automatically make that association with Bollywood.”  Ranjani’s goal is to carry on the work of her teacher: helping people understand what Bharathanaatyam really is, and by extension, what comprises classical Indian dance.

“I would equate it to ballet in terms of what type of training you need.  It’s very systematized in that sense.”  Ranjani started training when she was five and her youngest students, who range in age from 5-15, will be taking the stage alongside a number of guest artists at 12 Gates Arts on September 14th, 15th, 21st and 22nd.

On September 18th, Ranjani will also give a solo performance at the International House.  She views Bharathanaatyam as “one of the highest forms of yoga” in that it requires an integration of the mind, body and spirit.  “There’s a lot you have to have personally put in to make it pleasing to the eye.  You have to find the right balance between being a good dancer and being a good performer.”

In keeping with tradition, the solo performance will follow a set repertoire known as “margam.”  The opening piece will comprise a short, stylized warm up that begins with the form’s characteristic eye movements then moves onto the head, shoulders and hands.  Following two short student “items,” Ranjani will perform a 30-minute solo.

Solos of this sort, she explains, “give you a true sense of the artist’s abilities.”  They require technique: lifting the feet and raising the arms at the correct level.  But they also require miming and storytelling skills.  “You can’t use any words, so it’s all about body language.”  The ability to tap into both of these aspects is the mark of a great performer.

The solo show will end with a piece called nrittangaharam, which refers to a “garland of body movements.”

Both productions will feature traditional music and costumes but in her off time, Ranjani is breaking from tradition by studying Kathak, another classical dance form that originated in northern India.  To the untrained eye, Kathak and Bharathanaatyam look quite similar but there are actual many differences; Kathak, for example, features quick footwork that doesn’t allow the dancer to lift their feet as high as they would in Bharathanaatyam.

Ranjani admits that she would discourage her students from studying two different forms at a young age but now that she’s been studying Bharathanaatyam for 22 years, she’s interested in exploring different genres.  “In my head, they’re kind of compartmentalized.”

Although her main focus will always be Bharathanaatyam, she credits her teacher with her interest in other dance forms.  “No matter what type of dance you’re doing, whether it’s classical or something you do on the streets, we were always taught to appreciate.”