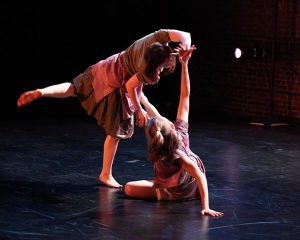 The program’s title she explained, was a takeoff on Skydive, the informal showing series that takes place in Goudie-Averill’s house (which doubles as a studio) every month.  “We wanted a title that was dynamic and active had a sense of people zipping in from other places.”

Zipline also features musicians from Settlement Music School.  Last weekend’s performances, for example, included both classical and jazz guitarists and this weekend will feature a violinist.  It’s an unusual pairing—not because it doesn’t make sense but because it’s so rare—and for Goudie-Averill and co-producer Lyons, it allowed them to qualify for support through DanceUP’s New Stages for Dance grant.

“We needed someone with a 501(c)(3)” Goudie-Averill recalled, “but we wanted make sure that they would potentially benefit as a presenter as well.”  Despite offering numerous dance classes, Settlement had never before produced any kind of professional dance and they were eager to get involved.

“We were interested in bringing in female artists who make work that is adventurous,” Goudie-Averill explained.  “Not even necessarily ‘experimental’ in the sense of word that ‘These people are doing wild and crazy things!’ but instead work that’s as contextual and intellectual as it is physical.”

That said, highlights for this weekend’s performances will include the Philadelphia premiere of choreographer Amy Lynne Barr (rumor has it there’s going to a big easy chair and lots and lots of jumping).  “We also have two pregnant dancers!” Goudie-Averill enthused.

“It’s amazing to me how many of the major well-funded companies and more presented artists are still male,” she noted, “even though dance is a field dominated by really smart women.  Sometimes it doesn’t feel necessary to champion and advocate for women but even in this age it is.”

The program will run an hour and twenty minutes, including intermission. Although the choreographers come from as far as New York, Texas and Mississippi, their work is connected, according to Goudie-Averill, in that it’s all very physical, very anti-ephemeral post-modern.  Many of the works incorporate text or other elements, including both humor and irony, but they’re still “dancey.”  According to Goudie-Averill, a work “can be a smart piece of dance and still be dance.”

Kat Richter is a freelance writer and teaching artist.  She holds an MA in Dance Anthropology and is also the Executive Director of The Lady Hoofers, Philadelphia’s only all-female tap company.  Her work can be found at www.katrichter.com.