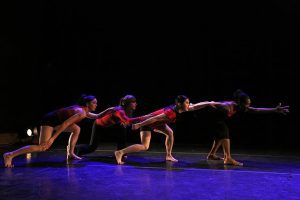 by Roger Lee for The Dance Journal

Underground Dance Works (UDW) has been bringing the joy of dance to Philadelphia and surrounding communities for over a decade. To celebrate this major milestone, Founder, Artistic Director and Choreographer Charles Tyson, Jr. is bringing back some company classics in a special concert titled “EPISODES.” The celebration concert opens Friday, April 26th through Saturday, April 27th at The Community Education Center.

“EPISODES is a collection of what I affectionately refer to as greatest hits and deleted scenes from some of my earlier works,” says Tyson.  He goes on to add, “The finale of EPISODES is Check It!!!,  an energetic jazz-influenced piece that opened Underground Dance Works premiere concert back in 2003.”

EPISODES resembles the seriousness found in Tyson’s past choreography. He has produced work dealing with heavy themes including gay marriage, bullying, and the aftermath of Hurricane Katrina.  Tyson explains, “My quirky movement style, known as EclectiFunk is stretched and twisted to convey themes of love, loss and broken promises”.

Original company member, Eisa Jackson is quick to state how “Charles allows his dancers to give their own input and feeling to the pieces.”  As a result, audiences are “able to relate to the stories in some way”.

This process is what Tyson likes to call “distilled emotion”.  In the development of Without You Tonight, Tyson asked his dancers to visit a moment in time when they were in a highly emotional state and literally on the verge of breaking down. The first half of the dance takes place in that last split second before the dam bursts. The second half is that feeling of cathartic euphoria just after having let it all out.  For Tyson, “it’s these precise emotional moments that have been driving the new works.”

The challenge for Eisa is to allow her “emotions to be fully communicated to the audience through just expressions and the movement.”  For the entire company, this honesty of emotion is the result of the time they have spent with each other and in which the company has also morphed in to being an extended family of caring, creative artists. “The company and I confessed to each other how much we look forward to and depend on our weekly rehearsals,” says Tyson. “The camaraderie and outright silliness that makes up our rehearsal sessions (alongside dancing of course) is a cathartic highlight to our week!”

EPISODES marks the first time in thirteen seasons that there will be guest choreographers in an Underground Dance Works concert.  There will be new works by company members Eisa Jackson, Lauren Sion, Anthi “Maria” Nguyen and Lauren Williams.  In addition, a series of three short dance videos, directed and filmed by Tyson with the cast of UDW will be presented between pieces.
EPISODES
Underground Dance Works
Friday, April 26 and Saturday, April 27 at 8 pm
Community Education Center, 3500 Lancaster Avenue Philadelphia, PA
General Admission $15, $12 for students, seniors, and dance professionals
Tickets are available at DanceBoxOffice.com and at the door.
Information: undergrounddancework.wix.com/udwrocks.