At the Philadelphia International Festival of the Arts, dance and physical theater are providing intriguing time-traveling moments. The opening dance event, Savion Glover’s DANCE SPACE, left audience members angry because they couldn’t see his whole body in motion for much of the time, but no such concerns in other shows where dance and physical theater artists took full advantage of the PIFA spotlight.

The medieval stone arches and stained glass lighting at the Fleischer’s chapel created dramatic setting for “1096” The Artistic Journey with the audience was invited to follow the dancers around.  Flamenco choreographer-dancer Elba Hevia y Vaca collaborated with choreographer KC Chun-Manning in a narrative that symbolized, explored and expressed women roles. The piece was an electric dialogue of between the flamenco and contemporary dance, which was not only artistically satisfying, it packed a visceral punch..

Vaca ignites the precision patterning of flamenco and, circling around her Jennifer Morley moves in convulsive and writhing movements, expressing the interior lives full of despair and hope. The choreographic styles are studies in contrasts, the staccato patterning and taut phrases and lightning releases in flamenco contrasted with the psychological and social context of Fresh Blood’s contemporary template.

Just as engaging is the rare opportunity of dancers and musicians in close contact with the powerful vocals by Spanish singer Ismael de la Ross and the sterling classicism of guitarist Raphael Brunn. The musicians also moved in close to the dancers creating indelible moments.  The Cante (songs) are lyrical, emotional and insistent, they conjure the essence in flamenco footwork, the counterpart to the structured improvisations.  Olive Prince, several months pregnant, which added dramatic content in key moments as did flamenco dancer Amelia Hernandez, whose carriage and deportment is just luminous. The scenario builds to scenes of liberating and ultimately, joyous communal dance.

26 of the region’s most accomplished physical theater artists comprise the cast of  Vainglorious ~ The Epic Feats of Notable Persons in Europe After the Revolution by the performance collective Applied Mechanics. The cast regulated in theatrical entourages led by Napoleon, Josephine, Beethoven, Talleyrand and Germaine and the supporting characters play out the French Revolution. The troupe turned the French Revolution into a spectacale par excellence. A moveable visual feast of wall-to-wall history in simultaneous mis-en-scenes that are enacted in every inch of the Neighborhood House Theater Space and gallery.  The audience is in the action (and sometimes forced to scurry out of the way of the action). It is interactive and immersive theatrical experience.

Just to mention a few unforgettable moments- beheadings are depicted with ballet moves of Adam Kerbel‘s black boots, as he entrechats to depict the fall of the guillotine blade, as prostrate citizens roll away. Josephine (a floating voluptuary as played by John Jarboe) moves through a Busby Berkeley geometric line.  As armies mobilize in a balcony, sardonic minuets break out in another part of the room, and in you peripheral vision, you realized people are being bound and pleading for their lives.  With very few words, Mary Toumanen’s portrays Napoleon with a signature, turned out stance and movement that winningly defines his emperor aura.

Credit goes to the inspired multi-visual design of Director Rebecca Wright and the refined physical theatrics of these players. Germaine Ingram choreographed moves on Erin Fleming for the bio-musical Last Call at the Downbeat, which recounts jazz titan Dizzy Gillespie’s life and career in Philadelphia. Gillespie started out performing as a teen in North Carolina as a band and novelty dancer.  There were still minstrel shows staged in the south in the 30s and Ingram deft reconstructions of Buck dances, snake hips and adagio soft tap is historically precise but shows how they foretell the future of pop culture show dance. Gillespie talks about hearing plantation stories where slave-owners would separate blacks who spoke their native language and that drums were part of the way they communicated, the same historical threads through this restoration of period show dance.

Ingram herself performed with Leah Stein for their collaboration/ improvisational  ‘Where Heaven’s Dew Divides’ a dance-song-narrative that tells the story of depiction the walk out of black parishioners in 1787 from St. George’s Methodist church in Philadelphia as a statement against discrimination and segregation in the white controlled religious institutions.

The opening tableau by Stein has the ensemble moving in sculpture communal of despair and solidarity. Later, Stein depicts the yellow fever outbreak in Philadelphia that claimed thousands of lives. Ingram is just as narrative with jazz tap dance- her opening trio with Corrine Karon and Khalil Munir, as Ingram sings the 23th psalm, in arresting jazz leif motifs and tap responses communicate images of oppression, spirituality and courage.  The story builds to the whole ensemble in a in tap march, led by Ingram. In a stunning duet,  Adrienne Abdus-Salaam moves in tap unison with Munir, but then  breaks to movement that unearths and reflects the dance’s Africanist roots. In contrast a duet with Stein and Ingram, about a woman’s memoir of despair, became too literal and overwrought. But, mostly, ‘Divides’ had  many moments of transcendence within the historical concept and real-time performance by this cast of dancers, singers, musicians and actors.  Fine original music by pianist Dave Burrell scored the piece, and violin virutoso Diane Monroe, joins Burrell for some of the performances.

Tribe of Fools emerging from their PIFA time machine

One of the PIFA Commonwealth Plaza events that is running throughout the festival is Tribe of Fools’ Shut Your Worm Hole, which might sound like a three stooges line, but Terry Brennan and company investigate the scientific possibilities of time-travel as they were explored by scientists at Penn. The Tribe is a dynamic physical theater company and true to form Brennan is not above stoogey shenanigans, for starters, his gold lame harem pants and space mullet (wormholey up front, death star extensions in back). As it turns out, it is closer to comic book mayhem than science, although the physics of physical comedy take over with pratfalls, tumbles and vaults off of the time machine box. Of course, this is all designed to be goofy for kids and with TOF’s signature lampoon of Philly culture for the adults to groan at. 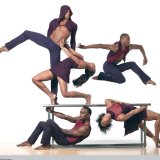 Philadanco embraced the PIFA time-traveling theme, opening their program with Time/Space their first commissioned work from the 70s that played a part in defining their style and ending with a new piece by Christopher Huggins called The Big Bang! that is, without doubt, destined to be signature Danco piece. This program had an electric sense of dance occasion.

Time/Space is set to Nina Simone’s epic full version of  ‘Sinnerman’ (where you gonna run to) and choreographer Harold Pierson’s created so many indelible images that helped establish ’Danco’s aesthetic. And it still displays their classicism, edge and athleticism with those jete variations and pulsing ensemble chasse that keep evolving. And even with several younger dancers on the roster, this piece is just as joyous.

Love in Pain is choreographer Milton Myers’ set to iconic songs by Aretha Franklin (Think, Natural Woman, Ain’t No Way, et al) unfolds as a meditation and celebration of the company women. Each dancer given something memorable and interpretive.  Myers makes it more than a fav dance play list; he threads in narrative with silent and compelling transitional movement- the triumphant saunter en attitude across the stage, or the ensemble women comforting a devastated friend after a lover breakup. He also makes the most of those Aretha phrases that are hardwired on the American consciousness- When the Queen of Soul, spells out Respect, the ensemble froze then the dancers executed the most gorgeous group plie.

Guess Who’s Coming To Dinner by Ray Mercer has the dancers over, under, sideways, down in a large table that functions half the time as an Olympic apparatus for vaulting, slides, low to the ground and strength moves. This piece also has sensual and inventive duets that There are a lot of newer dancers in Danco’s roster and this piece requires mach-speed precision and these dancers showed how much they are ready to be the standard bearers into their future.

Huggins is another choreographer who knows how to tap ‘Danco’s versatility and The Big Bang! resonated in this festival. The music by Max Richter’s lost-in-space atmospherics over a somber chamber sting piece.  Huggins makes the most of the somber and elegant violin line in this choreography on these dancers, who are dressed in unitards with sparkling panels so they can represent the birth of the universe via The Big Bang.  Within that imagery, Huggins creates very human duets, with inventive lift patterns and narrative line, which has moments that are so dynamic that they have a hypnotic effect of floating in this space. Huggins has the dancers in socks and it gets a bit to ice skatey in the middle, but, mostly, the poetic communals, and those dynamic duets, make this stellar.

One reply on “PIFA moves in time”