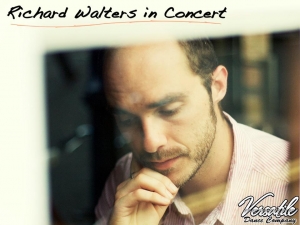 Versatile Dance Company (VDC) will be coming to Philadelphia and The Performance Garage on April 18th & 19th presenting Richard Walters In Concert.  This company, formed in 2009, is based in Akron, OH  under the leadership of Artistic Director Mitchel Federan.

Since its inception, the company has spread the art of dance, while simultaneously raising funds and awareness for charities. By using their talents to give generous donations, VDC educates the public on how powerful the art of movement can be. Some of their projects have included their original production “Praying For Abbey”, which raised $15,000.00 to help fight childhood Leukemia, “Speaking A Dead Language”, which benefitted two local battered women’s shelters and raised a total of $10,000.00, and most recently “I, Alone”, which accumulated $23,575.00 for The Autism Center at UH Rainbow Babies & Children’s Hospital. Artistic Director Mitchel Federan explains, “I’m incredibly proud of the work we’ve done as a company, and I can’t wait to see where our creativity leads next. I feel as though we exhibit the epitome of selfless giving – and what better way to do so than through doing what we love.”

Federan himself is an accomplished actor, dancer, singer, teacher, and choreographer. He has studied in a multitude of different genres including Tap, Jazz, Lyrical, Hip Hop, Modern, Contemporary, Ballet, and Acrobatics. Federan ‘s versatility as a choreographer has allowed him to choreograph and teach master classes for studios across the U.S. in all different styles. But it was Federan ‘s passion for dance and helping others led him to create Versatile Dance Company.

VDC’s latest project involved teaming up with singer and songwriter Richard Walters, who is from the United Kingdom. The new show “Richard Walters In Concert” features music from his most recent album Regret Less, available on iTunes, and directed & choreographed by Mitchel Federan & Billy Larson.  Richard Walters will be singing a full set list of his original music, danced by members of Versatile Dance Company as part of this benefit performance.

Richard Walters, at 29 years old, has been performing for over a decade, and has been a voice-for-hire for many prominent musical projects. He has released two full length albums – ‘The Animal’ in 2009 and ‘Pacing’ in 2011 – and his music has featured on the soundtracks of world eating US TV shows ‘Grey’s Anatomy’, ‘CSI: Miami’ and ‘So You think You Can Dance…America’.