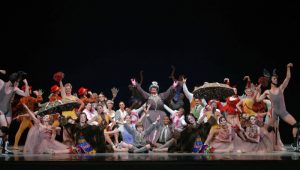 “Carnival is such a clever, beautiful production,” Artistic director Roy Kaiser says. “The narration is just brilliant, and we are so honored to have Mr. Lithgow performing with our dancers.”

Carnival of the Animals follows the dream of a young boy, asleep in the American Museum of Natural History. Wild creatures emerge, and hilarious antics ensue. With witty narration written and performed by Tony and Emmy Award winning actor John Lithgow, Carnival unfolds to the well-known Camille Saint-Saëns score.

Opening the performance is the joyous allegro of Ballo della Regina. This pageant of pastels and precision is a tour de force of virtuoso variations and ballerina bravura that merits its translation, “Dance of the Queen.”

The stunning simplicity and angular architecture of The Four Temperaments became the standard for Balanchine works. The ballet is an abstraction of ancient doctrines that enumerated the four aspects of a person’s disposition: melancholic, sanguinic, phlegmatic, and choleric. Having performed The Four Temperaments countless times throughout its history, the Company has been invited to present this work at Ballet Across America III at The Kennedy Center in Washington, DC this June.

Tickets to Carnival of the Animals at the Academy of Music are on sale now, starting at $30. Tickets are available online at paballet.org, by phone at 215.893.1999, and in person at the Kimmel Center Box Office. Casting is subject to change.

Carnival of the Animals performances at the Academy of Music:

About John Lithgow
John Lithgow may be most widely known for his three-time Emmy-winning role as Dr. Dick Solomon on the NBC sitcom 3rd Rock from the Sun. His roots, though, are in theater, having appeared on Broadway more than 20 times and winning the first of his two Tony Awards just weeks after his Broadway debut in David Storey’s The Changing Room. Among his more than 30 films, Mr. Lithgow received Academy Award nominations for his work as Roberta Muldoon in The World According to Garp and as Sam Burns in Terms of Endearment. He also won a Golden Globe Award and Emmy for his role on Showtime’s Dexter. Additionally, Mr. Lithgow has done extensive work for children, including several books and albums. His next kids’ book, Never Play Music Right Next to the Zoo, will be published by Simon & Schuster in October.