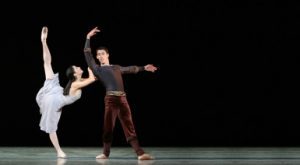 By Kat Richter for The Dance Journal

With Nutcracker season finally over, Pennsylvania Ballet welcomed the New Year with an eclectic and ambitious program at the Merriam Theatre on Thursday night: Balanchine, Wheeldon, Tharp—three very different choreographers treated to three very different interpretations by the company.

Considering the company’s connection to Balanchine through its founder, Barbara Weisberger, herself a student of the acclaimed choreographer, it comes as little surprise that pieces like Square Dance work so well on the company.  Balanchine’s precise symmetry was well preserved and as the twelve dancers dressed in pale blue sailed across the stage, they seemed to multiply in number.

Principal dancer Amy Aldridge nailed the petit allegro with a series of swiveling, syncopated changements on the tips of her pointe shoes.  Her interactions with the racing Vivaldi/Corelli score were so nuanced and subtle that they were almost perceivable—especially with everything else going on onstage—but the audience, ever appreciative, was generous in its applause.

Jermel Johnson’s solo, which did not exist in the 1952 version of Square Dance but was added in the 1976 revival, departed from the work’s earlier exuberance with a series of turns landing in deep, arched back lunges and intricate pirouettes untwisting from even more intricate preparations.  It felt out of place in contrast to the sweet and buoyant couples who do-si-doed around the stage, replacing the square dancer’s traditional skips and hops with pique turns and chasses, but it endowed the work with a greater degree of emotional depth.

Twyla Tharp’s Push Comes to Shove, unfortunately, didn’t work quite as well.  To say that Baryshnikov is a hard act to follow is, of course, an understatement.  The 1976 classic is as much about the Russian virtuoso as it about choreographer Twyla Tharp, and although Pennsylvania Ballet’s costumes and staging were true to the original, right down to the signature bowler hats, dancer Zachary Hench lacked the necessary panache to do the lead role justice.  He caught all of the off kilter turns and jumps but there was a certain bravado missing from his nonchalance.  Principal Lauren Fadeley seemed to be the only one who “got” the comedic essence of the work, with some help from Julie Diana.

The highlight of the evening was actually Christopher Wheeldon’s After the Rain, which premiered in 2005 at the New York City Ballet’s annual New Combinations Evening.  Sandwiched between Balanchine and Tharp, Wheeldon’s work was a breath of fresh air danced by three couples in gradient shades of navy and cobalt blues.  Lined up one behind the other, the three female dancers pitched their weight forward with the support of their partners, lifting one leg to the side until it was parallel to the floor.  They froze, but then their legs descended like the hands of a clock, dropping from three o’clock, to six, then up to twelve pushing the ball and socket joints of their hips beyond their limits.

The music of Arvo Pärt was the perfect canvas for Wheeldon’s gravity-defying choreography.  The dancers played in and around the silence provided by the ample space between notes; the violins battled with the piano as the dancers skimmed across the stage, supported on their toes or leaping backwards in space.

After the first movement, which left the stage empty, Hench returned to the stage with Diana for a tender, slow motion duet.  Stripped of their blue costumes, the husband and wife pair returned in simple practice clothes; he in a pair of pants and she bare-legged in a plain salmon pink leotard, point shoes discarded and hair unpinned from its tight French twist.  They ambled and meandered, leaning from side to side as the duet—ever steady in its adherence to the three/four time signature— became more expansive in its use of space and bodies before ending in a simple kiss.