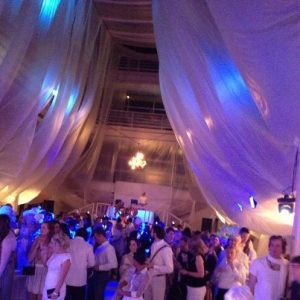 by Kat Richter for The Dance Journal
Photos by Leah Weber

Local choreographer Brian Sanders doesn’t do subtle.  In fact, had post-modern pioneer Yvonne Rainer attended JUNK’s Snowball at Hamilton Hall on Saturday night, she might have reissued her “No to Spectacle” manifesto right then and there but that was, and remains, the genius of Sanders’ contribution to Philadelphia’s dance community.  It’s big, it’s bold, and sometimes there are even college kids dressed in bunny costumes with pom pom tails.

The Snowball, a benefit for the company which included a preview of a new work set to premiere at the Annenberg Center this December, drew a large crowd of supporters, students and local artists.  Hamilton Hall became a luminescent but eerie winter wonderland with plastic sheeting running the entire height of the main atrium.  Guests were encouraged to dress all in white and Sanders’ crew of party girls and snow ball boys followed suit with white go-go attire and airbrushed tattoos. 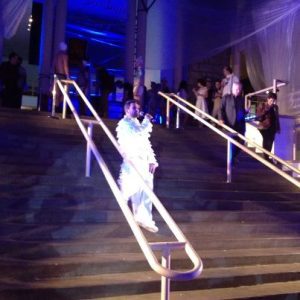 Between the fried Oreos, the hot dog cart and the signature cocktails, the entire event felt like something out of an Angela Carter novel (and that was before the guest with the fully operational angel wings showed up).  An hour in, Sanders, who looked part ring master, part chicken in his ruffled white suit, welcomed the guests and shooed everyone away from the dance floor.

“You’ve gotta clear out,” he warned with a smile.  “The dancers will take you down.”

What followed was part dance, part circus, part slow motion WWF.  A group of dancers dressed as bunnies emerged into the space, then hopped up the central staircase before sliding on their backs headfirst and somersaulting down the handrails.  Their agility was every bit as impressive as it was during JUNK’s The Gate Reopened at Pier 9 during last fall’s Live Arts Festival, but the mood was more whimsical this time as opposed to the urban, grungy post-apocalyptic world created in Gate. 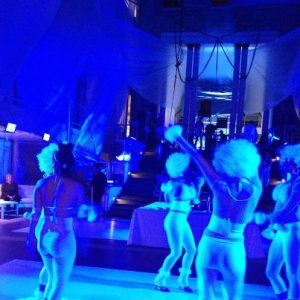 Sanders’ newest work drew movement vocabulary from a number of dance genres including ballet, break dancing and capoeira.  A male dancer dressed as a two-faced frog prince traversed the entire dance floor by turning circles on his knees.  Jerrica Blankenship performed blindfolded while Courtney Lapresi threaded her body through a heart shaped hoop suspended from the ceiling.

The piece came to its pseudo-WWF climax when Lapresi strapped on a pair of stilts and Blankenship harnessed herself to a thick, black bungee cord.  The two women sparred in slow motion, with Blankenship’s bunny minions launching her across the floor aimed at Lapresi’s head.  It was simultaneously terrifying and hysterical—a fairytale gone very, very wrong or perhaps very, very right.