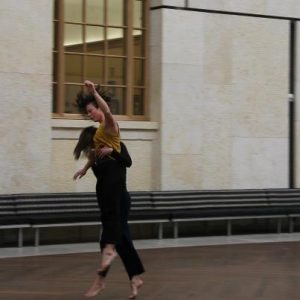 Last night’s performance by Tori Lawrence + Company at the Barnes was as much about negative space as it was about movement.  In the two years since Lawrence’s graduation from Franklin & Marshall College, her company, which is comprised predominately of fellow graduates, has become known for its site-specific work.

Elizabeth, a film directed and choreographed by Lawrence, and Holding Place, the meandering trio performed in and around the Barnes’ Annenberg Court, were presented by the museum as part of its ongoing efforts to bring contemporary art and artists into the space.  Although the choreography played it safe, the works turned a simple, rectangular room into a stage in which the audience became part of the performance.

Filmed in rural York, Pennsylvania, Elizabeth featured dancers Lora Allen and Ashley Lippolis.  The cinematography was stunning: golden fields of wheat against a bright blue sky contrasted to the dark and dusty rooms of a small eighteenth century home.  The mood was pensive as Lippolis swayed forward and back in a wooden chair and Allen rolled across the floor and over a pair of old fashioned boots.

An original score by Vicki Brown and Mona Chambers helped to lace the film together, turning its individual parts and improvisatory sequences into a linear narrative that told the story of two women.  Their relationship was unclear, their problems unknown, but the rich colors and clear images brought the historic structure to life.

In Holding Places, performed by Amy Lynne Barr, Eleanor Goudie-Averill and Meredith Lyons, Lawrence employed the natural framework provided by the floor to ceiling windows that overlook the museum’s entrance and courtyard.

After traversing the length of the room by shifting her limbs and ribs into place with her hands, Goudie-Averill exited the museum and sat on a simple chair beside which a square had been drawn in chalk to frame a pair of black and white shoes.  For a while, she simply sat with her back turned to all those who crowded behind the window eager to see what would happen next.  But then, her solitary meditation turned into a duet with the arrival of Lyons.  The movement was simple but effective—the dancers shifted their weight, sat down, scooted to the side and crossed their legs almost as if to caricature the constant movements of the audience who were anxious not to miss a moment.

Their swirling floor patterns gave new meaning to the phrase “audience participation.”  Mothers called their toddlers back and pulled them out of the way; bystanders sauntered to the bar and back again, craning their necks for a better view of the dancers, sitting down, standing up and sometimes giving up all together.

Whispers of “Can you see them?” and “Where’d they go?” filled the Annenberg Court as the trio disappeared behind doors, down hallways out of the museum entirely.  The music of Brooklyn-based Ruth and Bing anchored the dancers as they marched through the space, carving their way through the audience.  The effect blurred the line between dancer and spectator, human and sculpture and museum and stage.