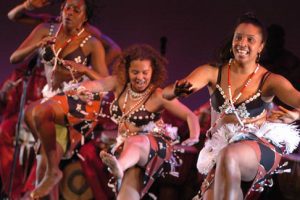 The crowd gathered in front of the Painted Bride on Tuesday morning wasn’t your usual dance audience.  They were all men—young, African American men and a few Latinos.  The “performance etiquette” speech delivered by their chaperone would suggest that they were new to the dance world too but by the end of the hour-long concert they themselves were on their feet and dancing the Funga, a traditional dance said to have originated in Liberia and taught to American dancers by anthropologist Pearl Primus.

This is because good things happen when terms like “African Dance” are turned inside out, and when established companies partner with emerging choreographers to offer audiences a new take on traditional music and dance.   Let the Roots Show, the result of a new partnership between Kùlú Mèlé African Dance & Drum Ensemble and The Requisite Movers, does both of these things.

When asked how long the two companies had been planning for the concert, Nathea Lee, Managing Director of Kùlú Mèlé thought about for a moment then laughed and replied, “Since the New Stages for Dance grant was due!”

Lee explained that the company decided to produce its first Thanksgiving weekend show in 2010.  Although they were nervous about ticket sales, they ended up having to turn people away.  “We had to bring in extra chairs!” Lee recalled, and attendance has been growing ever since.

Tuesday’s student matinee featured several pieces which will be performed this weekend including Dununda Ba, Hip Hop, Gathering and Wassalonka.  Hip Hop was definitely the crowd favorite on Tuesday but the energy of the dancers and drummers (and indeed dancer/drummers) in Dununda Ba was infectious.

Gathering, choreographed by Jones, told a different story.  As an artist, she is interested in both storytelling and memoir.  She conceived of Gathering as an “homage to women” and a “gathering of rhythm” but don’t expect any of the explosive percussion that makes Dununda Ba such a crowd pleaser.

Instead, the movement is subtle: the vocabulary and motifs are the same but the music is recorded and the circular patterns traced across the stage seem to bring the notion of diasporic movement to life.

“There are so many patterns in Africa dance,” explained Jones, who has always been interested in finding connections between the multiple artistic communities in which she works.  To her, the notion of “inbetween-ness” opens up new possibilities, especially as far as movement traditions of the African Diaspora are concerned, and she finds these possibilities the most interesting.

Gathering is the second work she’s created for an African dance company and she expressed a desire to present traditional patterns in a “way that is both simple and stunning.”

The presentation of traditional dance is of no little concern to Kùlú Mèlé Artistic Director Dorothy Wilkie; indeed it is the presentation and preservation of African Dance that comprises that company’s raison d’être.  “We’re all about passing the torch,” remarked Wilkie, who noted that the company’s youth ensemble, Omo Kùlú Mèlé has students as young as six.  “We want audiences to understand the relationship between the dancers and the drummers.”

But for Jones and some of the younger choreographers coming up through Kùlú Mèlé, innovation is just as important.  “African dance has been in the US for a long time now,” said Jones.  “We’ve seen generations of embodiment.  I think as far as ownership is concerned, we have as much to offer African dance as it has to offer us.”

Kat Richter is a freelance writer and teaching artist.  She is also the co-founder of The Lady Hoofers, Philadelphia’s only all-female tap company, and holds with an MA in Dance Anthropology.  Her work can be found at www.katrichter.com.