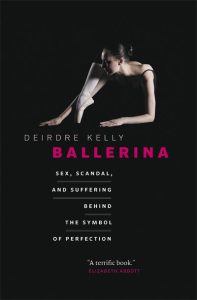 In Summer of 2012, I had the pleasure of working with Deidre Kelly in Toronto. Her new book has just been released here in the United States and she will be on tour in the region doing book signings.

In BALLERINA: Sex, Scandal and Suffering Behind the Symbol of Perfection Deirdre  Kelly pulls back the curtain to expose the reality behind the myth in her groundbreaking book about the underbelly of the ballet world. Kelly, a dance critic, reveals ballet’s shadowy roots in this rich and colorful history – from the earliest ballerinas in the 17th century who commonly led a double life as concubines to the extreme poverty of dancers in the 1800’s; and from the all too common life altering injuries from fire to the toothpick-starved anorexic dancers of the famed George Balanchine.

BALLERINA features the powerful and dramatic stories of some of the industries greatest dancers—Anna Pavlova, Isadora Duncan, Suzanne Farrel, Gelsey Kirkland and Evelyn Hart. Although Kelly leads with the cruel and often anti-feminist world of ballet, she ends with an examination of how conditions are in fact improving for dancers. Kelly observes that “the time has come to rethink ballet, to position the ballerina at its center and accord her the respect she deserves.”

The secretive world of ballet continues to fascinate the public – both aficionados and fans of popular culture, since curiosity about the dance world is at an all time high. Dancing With the Stars attracts up to twenty million viewers per episode, and LifeTime’s Dance Moms is in its second season. The critically acclaimed film Black Swan which gave the world its first peek at the back room drama of ballet was a major box office hit. The popularity of new shows such as ABC Family’s hit series Bunheads and the CW’s reality program Breaking Pointe, make it clear that the ballerina and her struggles are in the spotlight.

Deirdre  Kelly is a journalist, author, and internationally recognized dance critic for Dance Magazine, the Dance Gazette, and the Globe and Mail, where for sixteen years she was the paper’s dance critic on staff. A contributor to the International Dictionary of Ballet and the online arts group www.criticsatlarge.ca, she is the author of the bestselling memoir Paris Times Eight. Her articles on dance have also appeared in Elle, Vogue, Chatelaine, and Saturday Night. She lives in Toronto with her husband and two children. More about Deirdre Kelly at www.deirdrekelly.com