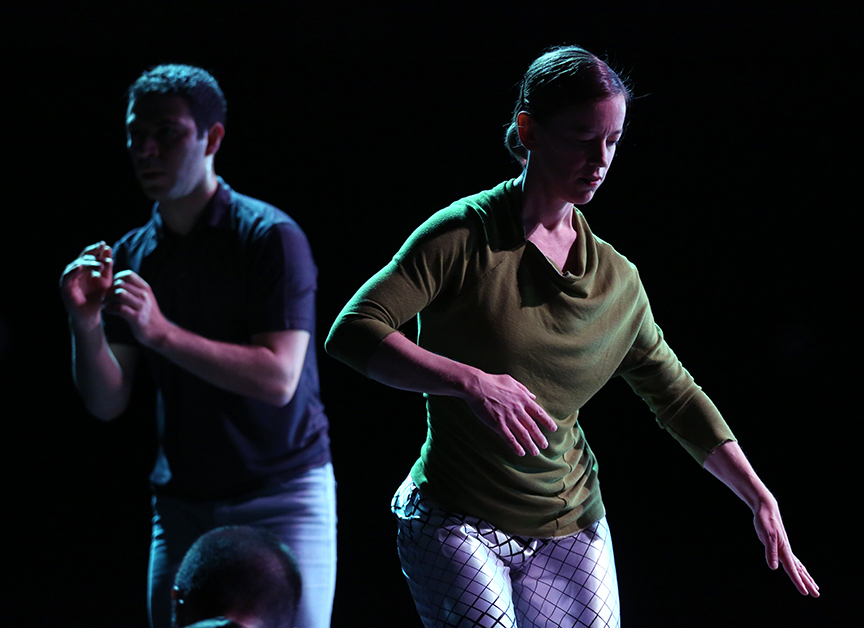 A good portion of what I do as a performance photographer has a lot to do with timing and anticipation. Not coming from a performance background it has been watching and photographing various styles of dance, everything from hip hop, modern to ballet to develop a basic understanding of anticipating and being able to identify the moment.

The other big part of what I do comes into play looking at the composition of a given moment. The photograph is like a canvas with the choreography being the paint. We as performance photographers use it to create or paint the moment but it is up to each of us through our own unique brushwork to paint the image as we see it. This is where composition comes into play.

A choreographer can have three different photographers shoot their work at the same show and even for the same moment and have three different views. A lot of it can sometimes be luck. Where you position yourself can affect not just the lighting in the shot but also the way you choose or are able to compose the shot. In the first image above you’ll see dancers Guillermo Ortega Tanus and Bronwen MacArthur from Eun Jung Choi’s piece “Study #2 – Holy Cabinet”. The lighting at the moment really helped create an awesome mood for the shot but I also chose to go for a closer crop placing Bronwen slightly in the foreground and making sure to include Guillermo in the slight background. A slightly different angle would have achieved the perspective I was going for better but still a very cool shot. Another choice at this moment was individual shots of one of the performers or the composed shot with them both. When the opportunity is there it’s always best to go for the composed shot of both dancers unless say one of the dancers is doing something uniquely gestural with their hands for instance and you can get in close.

Then in the image below you’ll see dancers Scott McPheeters, Guillermo Ortega Tanus and Bronwen MacArthur grouped together with John Luna in the background. Waiting for the right moment to click the shutter as the grouping of the three foreground dancers get to that perfect composition for you is what makes this a cool moment, again along with the dramatic lighting, but what makes it great is the bonus of being able to capture John Luna in the right background to add more depth to the image. Plus what photo isn’t better with a little John Luna in it. =) 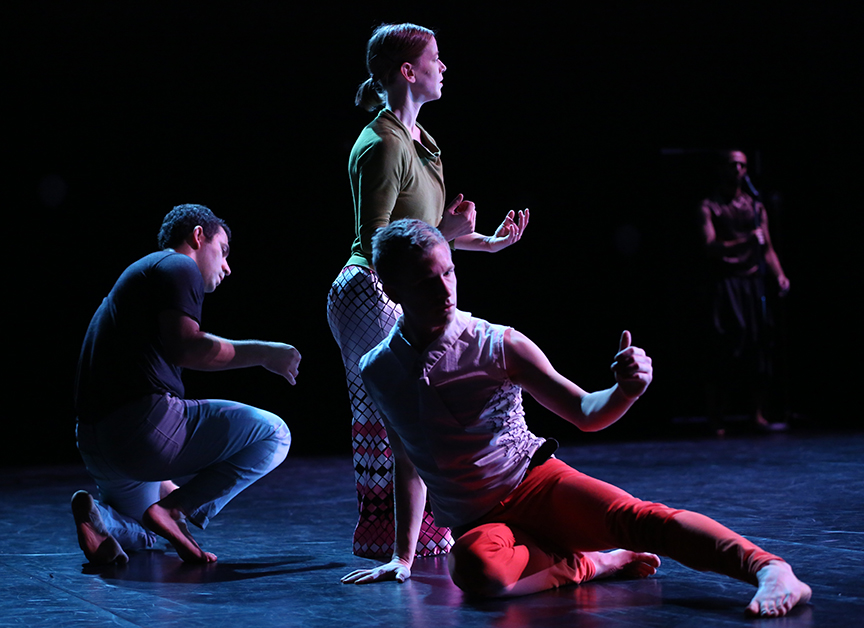 I hope you’ve enjoyed this inside the photographers mind type spin to the column and look forward to comments on the photos and this week’s column in general.

Bill Hebert (pronounced AY-BEAR), has been photographing performances in Philadelphia and New York for almost 8 years now primarily capturing dance. He has worked such local artists as Montazh, Rennie Harris Puremovement (RHPM), Headlong Dance Theater, BalletX, Winged Woman Dance/Tina Heuges, Nichole Canuso Dance Company and Group Motion among many others in Philadelphia. NY based and touring companies Bill has had the pleasure of working with include: Paul Taylor, Limon Dance, Parsons Dance, Doug Varone and Dancers, Merce Cunningham, RubberbandDance Group, Les Ballets Jazz de Montreal, River North Chicago Dance and Pilobolus. Bill has also had the pleasure of participating in three photography workshops with renowned dance photographer Lois Greenfield. Bill’s philosophy and mission is to “Capture the Essence of the Moment” and give the work a life beyond the stage. Bill Hebert is currently a photographer for The University of Pennsylvania’s Dance Celebration series, was one of the photographers for both the 2008 & 2009 Live Arts and Philly Fringe Festival, Choreographic Sketches in NY, 2010 IABD Conference and proud to be a part of the team for the “By Local” series in Philadelphia which will give local artists a chance to tell their story while doing what they love which is to entertain and enlighten others.